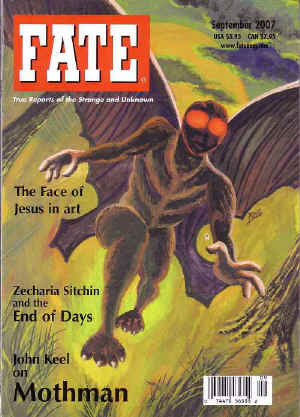 The contractor is here, tearing complete and absolute hell out of our upstairs bathroom.  Plus, he won’t stop asking me questions.  He seems like a nice guy, but likes to talk.  I can feel another half-assed update on the horizon…

Last night while driving home from my demoralizing job, I was listening to George Noory, and he was doing a full show about the Mothman.

Have you ever heard of this mythical creature?  I knew nothing, and was surprised to learn that the legend is based in a town roughly fifty miles from where I grew up — Point Pleasant, WV.

Supposedly two couples were driving through a wooded area there, back in 1966, and spotted what looked like a 7ft-tall man with wings, stuck in a fence.  When they stopped to check it out, this “moth man” freed himself and flew away(!).

This freaked them out, understandably, so they took off in their car.  And the creature started following them, flying above their vehicle, and making all manner of terrifying noises.

After that, there were regular sightings of the Mothman in the area.  And a year later a well-traveled bridge collapsed, killing dozens of people.  At the time it was one of the worst disasters in the history of the United States.

After the bridge fell, nobody ever saw the Mothman again….  And I just had a full-body shiver.

How could I not know anything about this??  There was a best-selling book about it, as well as a big-budget Hollywood movie.  Point Pleasant even has a Mothman statue in their town square!  Here’s some Wikipedia information about it.  It’s all new information to me….  And I grew up there.

Are there any legends of paranormal activity in your neck of the woods?  Like Bigfoot sightings or UFO crashes, or things like that?  Tell us about it, won’t you?

Also, what do you know about this West Virginia Mothbilly?  Are you familiar with it?  I need to know more.

And I need to go.  Sorry, but I’m always about 2 minutes late at work, and I’m supposed to be setting an example.  Ha!

I’ll leave you now with a video Knucklehead said I could share with you folks.  If you’re a regular in the comments section, you’ll know that Knucklehead (Teri) and her husband will soon be moving to Italy.

Somehow, through a confusing series of events, they were invited to audition for the HGTV series, House Hunters International.

Producers liked their audition video, and told them it was almost a certainty they’d be picked to star in an episode.  Unfortunately, however, they finally decided they’d done enough shows about that particular section of Italy, and the whole thing came crashing down.

Which really makes me sad, because I was going to try to talk Knucklehead into wearing one of the shirts…

In any case, here’s their audition tape.  Pretty cool.

Have you ever been on a TV show?