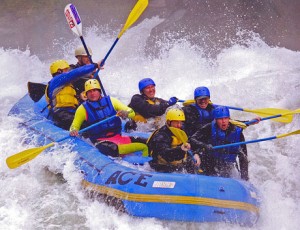 On Saturday we pushed the rolling box o’ beds out of our garage, and set it up on the driveway.  We’re thinking about selling it, and wanted to see if a coven of hedgehogs had taken up residence inside.  And, I’m happy to report, they had not.

I don’t believe we’ve used that trailer since 2006, which means it’s been idle for two full summers.  Clearly, our camping days are behind us.  So we might put it on Craig’s List and see how it goes.

But it’s a funny thing…  All four of us felt kind of sad when we climbed back inside the ridiculous contraption.  It still smells of ancient campfires, and we were getting all nostalgic with it.

Why do we only remember the good times?  Why is the past so often romanticized in our minds?  We were fixating on the rare days when everything went perfectly, when we were all happy and smiling and enjoying fantastic burgers cooked out of doors.

Yet there’s a reason why we haven’t gone camping in two years, and that’s because reality almost never lives up to the fond memories.  We’d go chasing that Norman Rockwell dream, and it would be two hundred degrees and humid outside, all of us would be breaded in filth, and I’d have gnats whitewater rafting down the length of my crackal region.

Yeah, maybe we can make enough money to pay for two or three weeks-worth of stays at Courtyard by Marriott?

A few weekends ago Toney did our taxes, and the results were not satisfactory.  The little window at the top of the TurboTax page told us we owe the United States government $6000.

I just about shit my pants — every pair.

No way it could be true, no way.  We’ve always gotten at least a small refund, we’ve never had to cut a check.  Maybe she made a (significant) mistake?  The house was rockin’ with middle school shenanigans as she plugged in the information; there was a good chance something went askew.  Right?  That’s the hope we clinged-to.

I suggested she close the program, and we give it some breathing room.  We could revisit it in a couple of weeks, when things are quieter and calmer around here, and be extra-careful with it.

And every time I thought about it during those two weeks, my stomach twisted like somebody was wringing-out a washcloth.  I believed it was wrong, but my former employer had paid me out for 500 hours of unused vacation in 2008.  What if it got jacked-up somehow?  What if we really did owe six grand?  Gulp.

On Saturday Toney returned to the computer with all her scraps of paper, and started over.  The final verdict:  a $41 refund.  Whew.  We owe the state of Taxylvania about $200, but under the circumstances… I’ll dance to the mailbox with it.

I guess you shouldn’t try to prepare your taxes in the middle of a Guitar Hero tournament?  Is that the moral of the story?  I think that might be one of them.

More good news:  I got my car inspected on Saturday morning, and everything checked-out.  My Camry is in good shape, but you never know.  Those garages, I think, use state inspections as an opportunity to bend you over the credenza.

A few years ago, in fact, I took my Blazer (worst vehicle ever) to a well-known outfit, and asked for an inspection.  And when they were finished I was handed a long list of problems that needed correcting.  I think the bottom-line quote was in the neighborhood of $750.

My brain almost exploded with anger — the dude was trying to rip me off — and I told him to put everything back together; I wasn’t paying him a cent for “repairs.”  Then I took my vehicle somewhere else, where it passed with no issues whatsoever.

So, I’m always hesitant going into those deals.  The garage we’ve been using seems honest, but they have a revolving door of employees there.  Who knows what today’s guy will be like?

But I was pleased with that result as well; it was the weekend of good results.  I got an oil change, tire rotation, and all necessary inspections — for $71.  It seems almost impossible to me.

Have you ever been ripped-off by a mechanic?  I have no doubt that I have, but nothing overly blatant like the walking, talking alimentary canal I mentioned above.  I’m stupid, especially when it comes to cars, but not that stupid.

Use the comments section to tell us your horror stories — or near-misses — involving car repair.  The pricks.

And I’ll leave you now with an exclusive peak inside the new Yankee Stadium, with Smoking Fish. Check it out.  The Yankees are trying to keep all this under wraps, but the vast network of liars and backstabbers never sleeps.  Pass the beer nuts.

Also, be sure to check out today’s Further Evidence.  I’ve watched it at least five times, and always ended up with tears in my eyes.  That’s some funny shit right there.