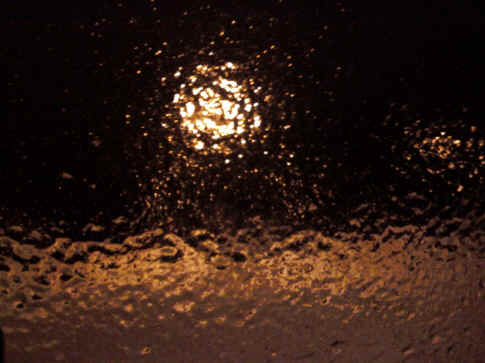 I took that picture, this morning between 1:30 and 2:00.  No, not from inside the shower.  It was the view through the driver’s side window of my car, as I sat around in the middle of the night, like a high-douche, waiting for the bullet-proof ice shell to loosen up a bit.

As I was leaving work a security guard said, “Be careful out there.  It’s pretty shitty.”  And his assessment of the situation was right on the money.  Shitty, it most certainly was.

The sidewalk outside the door was a highly-polished sheet of ice, and I had to walk like I was smuggling butt-eggs in order not to fall.  The parking lot was also slick and crunchy, but not as many people had walked in the same area, so it wasn’t quite as treacherous.

It was raining hard pellets at this point, and the whole world was encased in crystal clear ice.  If I hadn’t been facing a drive home in it, I probably would’ve thought everything looked really cool.  But, under the circumstances:  no.

My car had a hard protective coating on it, at least an inch thick.  I pulled on the passenger side door, and it wouldn’t budge.  What the?  I tugged harder, trying to remain conscious of the slickness beneath me, and the door exploded from its state of suspended animation.

Big plates of ice went flying in every direction.

I put my notebook and snack sack on the seat, and grabbed my military-grade ice scraper off the passenger-side floor.  And with the very first scraping motion, I knew it was going to be much more complicated than that.  It was almost literally impenetrable.

I egg-walked around to the driver’s side, played tug of war with that door, and got inside.  I started the engine, turned the heater as high as it would go, set it so it would blow directly onto the glass, and activated the network of heat-wires in the back window.

Then I got back out and tried to scrape again.  And it’s weird…  The rear of the car, and the passenger side, weren’t too bad.  I could apply a little pressure, and great sections of ice would bust loose.  It wasn’t really scraping, it was more like prying.

But the windshield and driver’s side were a mess.  The inch-thick layer of ice had become part of the car.  I literally couldn’t cut through it.

And why does that happen?  Why is there always bad sides of a frozen car, and not-so-bad sides?  There wasn’t much wind out there, so I don’t think that was the reason.  I’m sure some of you can school me on it…

So, I had few options, and decided to just get in the car and wait for it to heat up a little.  Then maybe I could make some progress.

I listened to George Noory, and his “everything’s going to hell” guest of the hour.  This one was talking about the impending explosion of Yellowstone Park, and how it will lead to the extinction of the human race.  Or somesuch.

Finally, after about fifteen minutes (fifteen real minutes, not fifteen tall-tale minutes), I noticed the ice at the bottom of the windshield was starting to go a little wobbly.  So, I got out and was able to clean the rest of it off.

And as I was working I heard a supervisor, way off on the other side of the parking lot, holler, “This is bullshit!  FUCK!!”

Finally I was moving, and the roads were horrible.  Until I reached the interstate the rear of my car wanted to trade places with the front.  The highway was a little better, but only the right lane, where previous vehicles had cut a path through the mess.

The sidewalk in front of our house has a few down-steps in it, and I didn’t trust any of it.  I had visions of a cartoon character slipping on ice, fully inverted, with his feet above his head.  So I walked through the yard, with my feet turned sideways, like skis.

I finally reached the front door, without blowing my neck open, and Andy exploded from the house.  He was wild, and took off running in some random direction.  Funk dat, I said.  If he’s gone, he’s gone.  I’m not chasing that crazy hound in this crap.

But, of course, he returned a short time later.  Coming from the opposite direction, I noticed…  Wonder if he ran all the way around the world?  It’s possible, I think.  Black Lips was moving.

I shed my coat, slipped into some ’80s sweatpants, flopped down in front of my computer, and popped the top on a Yuengling Lager.  Then another.

I finally crawled into bed at 4:20, almost three hours after I’d left work, and Toney’s alarm went off ten minutes later.  It was time for her to start the day, as I was drifting off to sleep for the “night.”

And that’s the way we live nowadays.