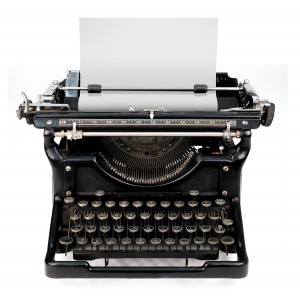 I’ve been noticing the way most people type, and the fact that I do it differently.  Because, you see, I’ve been trained…  I use all ten of my fingers, while most people just hammer furiously at the keyboard with their two main booger-hooks, their backs all hunched-up like a giant fetus.

No, I have the proper posture, start with my pointer fingers resting gently on the keys with the ridges at the bottom, and put every soldier to work.

And the reason I type in the correct manner, is the inspiration for this update.  Today I’d like to discuss the stupidest and most embarrassing classes we’ve ever taken.  I’ll start by sharing my experiences, and you guys can it from there.  How’s that sound?

In 1980, or whenever it happened, girls were the only people who signed up for typing classes in high school.  There were no personal computers, and typing was closely associated with secretaries and receptionists.  Not too many guys were drawn to such a thing; it was considered to be one step away from a tiny pink bow on the front of your underwear.

But I wanted to be a writer, or at least a journalist, and figured I’d better learn how to type.  And I’m glad I threw masculinity to the wind, and enrolled.  Because it was one of the few things I learned during high school that’s continued to pay dividends on an almost daily basis.

Most of the typewriters were manual models, I remember, which required that every key be hammered with a great force.  By the end of the semester my fingers were completely muscle-bound; it looked like I had five miniature Schwarzenegger arms on each hand. There were a few coveted electric typewriters in the classroom, but I was quickly banned from using them, because I kept tucking things inside, and launching them across the room by hitting the keys.

So, the class was embarrassing, but ultimately useful.  I’m glad I took it.  The mistake was signing up for Typing II…

Yeah, that was a tactical error of the highest order.  There were only two boys in the class (down from four or so), and all of us had to do one endless packet – for the duration.  Each period was designed to replicate an hour in a business office: filling in forms, writing letters, addressing envelopes, etc.  And the next day you’d start where you left off, and this continued for months on end.

There was a schedule for all this boolshit, and I kept getting farther and farther behind.  No matter how hard I worked, I’d finish each class in worse shape than when I started.  It was like Lucy and Ethel at the candy factory.

I ended up failing the course, because I was roughly seven years behind with my forms ‘n’ stuff.  And there was a lot of wrinkling, water damage, and shoe prints, as I recall…  If I’d been a secretary, I would’ve had to resort to low-cut blouses, or worse.

Oh yeah, it was definitely one of the stupidest and most embarrassing classes I ever took.

Another was something called Singles Survival, which was basically Home Economics for boys.  We had to sew buttons on shirts, wash and dry clothes, and cook food with real stoves and stuff.  Wotta fiasco…

For one thing, everybody kept mixing up the cooking supplies, to sabotage other peoples’ projects.  I remember one guy was almost in tears because he made a chocolate cake using salt instead of sugar.  Wherever he is, he’s probably still harboring deep-seated resentment over the episode.  I’m fairly certain Rocky was involved.

I also remember putting an apple pie in to bake (it was a thing of beauty), and the teacher telling me I’d need to leave my next class to remove it, once it was done.  She wouldn’t help at all; it was fully my responsibility.  Talk about a hard woman…

And the teacher of my next class was the assistant football coach!  So, I had to approach him (already tainted by all the questions my typing classes had triggered), and ask if I could pop out for a few minutes – to take a pie out of the oven. The man couldn’t stand the sight of me, and this didn’t help matters.  You can probably imagine the expression of complete and utter disgust on his face.

One time, after I’d already completed my sentence in Singles Survival, Bill and I loaded up the clothes dryer with a couple handfuls of silverware, a stew pot, and two or three metal trays.  Then we turned the thing on.  The noise was unbelievable, and we walked quickly away with no expressions on our faces.  Until we were around the corner, anyway…  Then we laughed until we almost puked.

Another stupid and embarrassing class was called Rock/Pop Music Survey.  It was taught by a big blond-haired dancing bear poofter, whose ass was much wider than his shoulders.

The students who signed up for this so-called learning opportunity were comprised mostly of stoners in Army jackets, uninterested black guys, and me and a few of my friends.  The teacher had no control over the class, and the stoners dominated.

We were left alone for a few minutes one day, and people were practically hanging off the rafters; it was complete pandemonium.  A couple of the hoods were throwing blackboard erasers at a big clock that was embedded in the cinder blocks, just repeatedly hurling Nolan Ryan fastballs at it.  Eventually the thing came loose, and when ol’ loveseat ass returned, the clock face was hanging halfway down the wall on wires.

“What happened here?” he said, while considering the scene.  There were a dozen or more chalk blotches all around the hole, where the erasers had hit.

“We don’t know,” one of the criminals snickered.  “It just fell.”

I could see a flash of fear in the eyes of the dancing bear, and he muttered, “How strange.”  And he never said another word about it.

Sometimes he’d turn the lights down real low, and make us listen to Barbra Streisand records.  The black guys would always say stuff like, “Hey! Whose hand just touched my dick?”  The whole “class” was ludicrous.

Our final exam (ha!), was to record a thirty minute radio program, with certain elements present.  Things like news, weather, a PSA, station identification, etc.  And Rocky turned in a tape that was loaded-up with swearing and Zappa tunes that bordered on pornography.  I remember he introduced “Come Sail Away” by Styx, as a song about a guy jerking-off in front of an electric fan.

Any other teacher probably would’ve had us all arrested, but this guy was terrified and just let it go.

I also took French for three years and learned nothing, as well as some kind of stupid crap called Consumer Math, where they taught you how to balance a checkbook, and estimate your cost before arriving at the grocery store cash register. I mean, seriously.  This was quite possibly the dumbest class, populated by the dumbest students, I’ve ever encountered.  I felt like a full-on Jeopardy champion amongst that gang of slack-jaw slingblade idiots.  And mister, that’s saying something.

What were the stupidest and most embarrassing classes you ever endured?  Please tell us about it in the comments, won’t you?  Did they offer ridiculous crap like Rock/Pop Music Survey at your school?  If so, we need to know about it.