Last night I was talking to our older boy on the phone. He and his brother had just returned home from swim practice, and this is part of our conversation:

Me: What are you doing?

Him: Getting ready to have dinner.

Me: What are you having, a baloney sandwich?

Me: Pig scrotums, buttholes, lips, and some other stuff. But mostly scrotums, I think. It’s good stuff.

He wasn’t convinced, for some reason. But, it’s true: I did grow up on it. Between the ages of 2 and 22 I ingested hundreds, if not thousands, of baloney sandwiches. Some fried, some not. However, once I moved away from home… I never ate it again. I don’t know why; it wasn’t a conscious decision, I just never personally purchased it.

And now it’s a creepy and mysterious thing to our boys. Probably like “souse” was to me, when I was their age. Shit! I just had a full-body shiver. 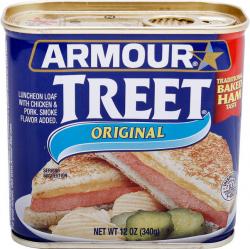 When I was a kid my dad also liked a weird Spam knockoff, known as Treet. Are you familiar with this delicacy? It looked like a hunk of human flesh, encased in a snot gasket. It was revolting to look at, but by the time he’d fried it up… it was fantastic. That’s another thing I haven’t eaten since I was young, and probably never will again. Although, I’m not completely opposed.

Do you have anything like that? Something you ate regularly as a kid, but never as an adult? And what’s your history with baloney, aka “West Virginia round steak?” I think it kinda peaked in the 1970s, right? Do people under the age of 80 still eat it?

Also, I’d like to ask a Question from my sons’ point of view. What non-obscure foods have you never tried? Anything? Are there any foods that people might be surprised to learn you’ve never eaten? I’ve mentioned it before, but I’ve never had Lucky Charms. Those little pencil eraser marshmallows concern me, and always have.

So, there you go… today’s assignment. I have to go to work early, yet again, so this one’s a little brief. But I’m hoping you guys can take up my slack.

Please remember, I’m trying to get the site’s page views up in October, so any help you can provide is appreciated. Yesterday’s gallery of fast food signs gone wrong is tailor-made for Facebook, for instance. Please share it (or anything else here), if you’re so inclined.