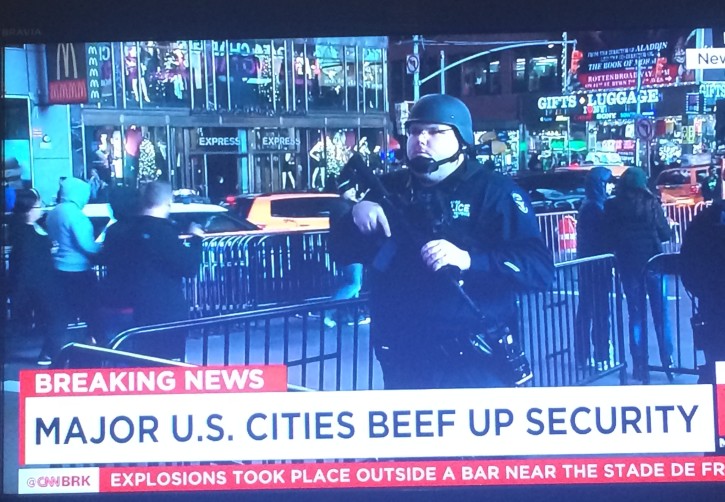 I’m suffering a mopey low-grade yuck. It’s been hanging on for more than two weeks now, and enough is officially enough. It’s one of those annoying situations where you don’t feel horrible, but you certainly don’t feel good. For a long time.

I’m not a fan of the lingering. I’d prefer a couple days of full-on sickness over this long, drawn-out diluted affair. It’s bullshit, I tell ya. Wonder if it has anything to do with lack of beer? Hey, maybe that’s it?! Somebody get Dick Yuengling on the blower, stat!

But… we almost immediately lost our way. Here’s something else I posted there, around the same time. I think it’s funny, but it doesn’t adhere to the original concept. And by the end I was posting short stories at that site. It was ludicrous. Also, Metten and I were far too ambitious. Five posts per week?! Man, that’s rich.

It’s still one of my favorite failures, though. We screwed it up, but there’s enough evidence to suggest our original instincts were sound. Of all the crazy crap I’ve begun and abandoned (the internet is littered with ’em) Mockable is the one I feel the most regret about. Oh well.

Toney and I had lunch at Chipotle again on Saturday, and there was a big hair in my food. I bit down, pulled the burrito away from my mouth, and immediately realized I was still tethered to the thing. I yanked the intruder out, and it was at least a foot long. And it had a big hunk of chicken dangling off of it.

Toney was about to dry-heave, but I don’t know what it is… Hair in my food doesn’t bother me all that much. Oh, I’d prefer it not be there, but I don’t have the usual reaction to it. I think most people are reasonably clean, right? …Hello? In any case, it feels like an overrated revulsion to me. What are your thoughts on the subject?

Something that bothers me way more: men wearing loads of cologne. Or even a small amount, for that matter. That genuinely disgusts me, and not because I’m allergic, or anything like that. It just makes me sick… you know, smelling a man. Blecch.

Oh, and here’s another one…  I took my son to one of those walk-in clinics a few days ago, because he had a sinus infection or somesuch. And they had a touch screen sign-in kiosk. A touch screen! At a clinic full of people with ebola and SARS and the full lineup of hepatitises. I used my right pinky, for some reason believing that would limit my exposure to the nastiness, and ran scalding hot water over it as soon as I had the chance. What high-wage genius came up with that scheme? Seriously? Humanity is a shithouse.

I didn’t watch one minute of the Oscars last night. Who needs all that pomposity, and high-horsery? I will not be lectured by a parade of know-nothings with fortunate bone structure. Fuck off. Apparently, though… Hollywood is a hotbed of hardened racists. Klansmen, essentially. But aren’t they the same people who drive wind-up cars and wear “I’m better than you” ribbons and choke up while discussing the LGBTLMNOP community? It’s confusing. Every year they remind us they’re the best and most sophisticated among us, yet they’re also white supremacists? Who knew? 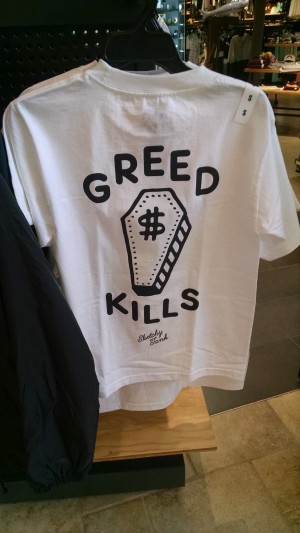 Speaking of high-horsery, I saw this obnoxious shirt at the mall yesterday. The interesting thing about it? It’s priced at $24.99. Ha! It’s basically a thin white Hanes undershirt, which cost about three bucks at Wal-Mart. It’s a good thing lack of self-awareness doesn’t kill.

I’d like to conduct an experiment here, which will probably fail miserably. Who’s with me?! I asked Toney to do it, and also the older boy, and got some interesting results. If you have a smart phone, open the texting app and type the words “People are.” Then… tell us what your phone predicts will be the next word. For me it’s “goddamn,” “gross,” and “stupid.” That should give you an indicator of… something. Toney’s results were similar, but the boy had stuff like “awesome,” etc. How?? Does the phone just default to shit like that? It makes me sad. Anyway, if you’d like to share, please do. And yes, I know… some of you don’t text because you’re heroes. Got it.

What are your feelings on household coffee mugs? Toney and I never discussed it, or laid down a formal plan, or anything. But we basically have my mugs and her mugs, and proceed accordingly. It’s worked for 25 years, or however long we’ve been drinking coffee together. But when it comes to the kids it’s just full-on mug anarchy. A few days ago I saw the older boy (people are awesome!) drinking from a mug with JEFF on the side. My mother bought it for me, back in the ’70s, I think. That just blows my mind. I guess I can understand the anarchy from their perspective; they’re just going for whatever happens to be in the cabinet. But I’d never use a mug with another person’s name on it. Is that strange? How do you handle this situation? Anything goes, or is there an unwritten rule like Toney and I have? And does it drive you absolutely insane when a visitor is manhandling one of your favorite mugs? Not treating it with the care it deserves? Asking for a friend…

I need to go now. Another high-stress week beckons. I sprinkled a few few half-assed questions throughout this update, so please do with them what you will. And I’ll be back soon.