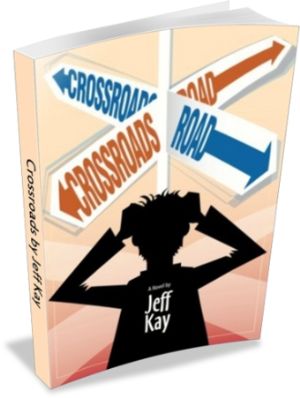 KDP, which is Kindle Direct Publishing, recently changed their rules, and are allowing self-published authors the chance to offer their books for free, up to five days per quarter.  Previously they would only allow it if your titles were already free on the Barnes & Noble or iBooks sites.

Since Crossroads Road has been out for a year, and sales have slowed to about one Kindle copy per day, I decided to test it out.  Just as an experiment…  I did a little research on some writing forums, and, based on what I read, I expected about 1000 to 1500 downloads across two days.  That’s a lot of extra copies in circulation, and that’s a positive — even if I don’t earn a penny from it.

I chose this past Friday and Saturday for my little test, because I’d convinced myself those would be the best possible days to try something like this.  It would become free on Friday at 3 A.M., which is midnight Amazon Standard Time.  And it would remain free until 3 A.M. Sunday.

And when I got out of bed on Friday morning, there had already been almost 500 downloads.  I hadn’t promoted it, whatsoever.  I couldn’t believe it.

I started tweeting about it, sent out an email to the Surf Report mailing list, and mentioned it a couple of times on Facebook.  And it went crazy.  I was expecting 1000 downloads, and got — are you ready for this shit? — 17,322.  It blows my mind.

I told my agent about it, and she was amazed.  That’s a hell of a lot of activity.  Probably three times as many, in two days, than the amount I actually sold via Kindle in a year.  I love it.  At this point I just want people to read it.  I know that a certain percentage of those downloaders will never read it, but many of them will.  And, again, that’s a positive.

I was excited by all this, and told my dad about it on the phone this morning.  Here are a few of his reactions.

You can’t get anyone to buy it, but they’ll sure take it for free, won’t they?

Now people will know to just wait, and it’ll be free again, eventually.

Good ol’ Dad.  Always so positive and encouraging.  I especially enjoyed the “you can’t get anyone to buy it” statement.  That book has sold really well.  It didn’t explode, but it’s done great.  Sheesh.  Most people have self-doubts, but I also have my parents to confirm all of them for me, and also bring up a few that I hadn’t yet considered.

Also, there have been about ten people who RETURNED the book to Amazon.  They didn’t just delete it from their Kindles, they made a point of returning it, to make some kind of statement.

It’s that first chapter…  It sets the tone, immediately.  And if someone is expecting gentle humor, like Garrison Keillor or whatever, that first chapter is a shock to the system.  Plus, there’s a certain segment who HATES the Sue character.  Almost all of the criticism I’ve received has been Sue-based.  Oh well.

I did receive an email from a woman who is reading the book, and is enjoying it.  So, that’s encouraging.  And she says she especially likes Sue.  It’s bizarre.

So, we’ll see what happens with another 17,322 copies of Crossroads Road circulating out there.  I hope it leads to something interesting.  It’ll almost certainly garner a few negative reviews, because it’s probably fallen into the hands of some people outside my target audience.  You know, the people who don’t share our twisted sense of humor?  But I’m hoping there will be many more positive reactions, than negative.  Time will tell.

And I’ll be back tomorrow with a regular update.  I’m going to work now.

Have a great rest o’ the weekend, my friends!