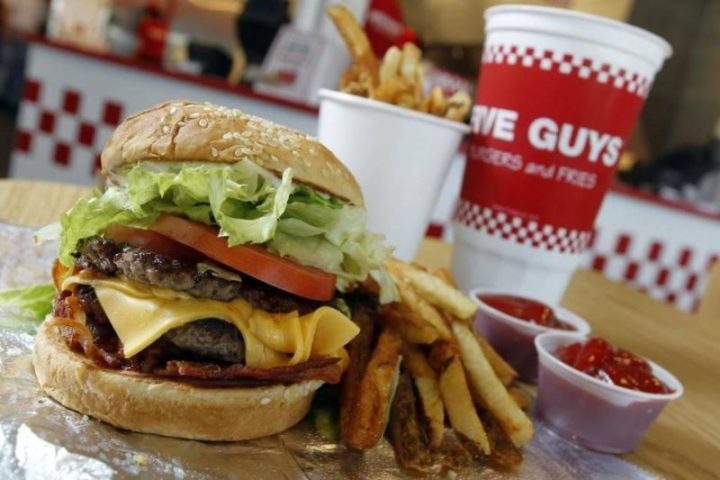 On Saturday evening Toney and I had dinner at Five Guys, and it was good. I had a cheeseburger with lettuce, tomato, raw onions (as opposed to grilled), green peppers (hell yeah), ketchup, and mustard. Great burger! And we shared a metric shitload of fries. It’s always fantastic, and on Saturday it might’ve been even better than usual. The condiments were expertly distributed, which is rare. Extremely rare.

Another positive: they’re always cranking a classic rock (AOR) station from Sirius XM in there. They play all the stuff you’d expect, but also some semi-obscure gems like this. So, it was definitely a positive experience, overall.

However… there were also some negatives. I know this might be a surprise to some of you, but it’s true.

First of all, I find it to be a tad expensive. Of course, everything is expensive now. If you go to Wendy’s and get a number 1 with cheese, no pickles, and a Coke it’s about eight bucks at this point. That shit’s outrageous. And Five Guys is even worse. Every time I go there a little voice inside my head shouts, “Great God in heaven!!” whenever the cashier gives us the final cost. It’s pricey for an order-at-the-counter hamburger joint.

Also, the floors are really slick for some reason. I always feel like I could fall down in there. I’m practically navigating the place like I’m walking across a frozen lake. It’s not greasy, it’s just the kind of tiles they used on the floor. It’s hard to explain. If you go in with wet shoes, while it’s raining, good luck. Sometimes I find myself standing there ordering, and realize my feet are slowly moving apart. It’s a wonder people aren’t exploding their skulls there on a daily basis.

And their tables are elevated, which bothers me. They used to have normal tables, but now they’re way up in the air. I’m not a fan. For one thing, I’m a portly lad and those stilt-chairs put me in a dangerous position with the center of gravity, etc. I might have to start insisting that we all wear crash helmets while visiting a Five Guys. Sheesh. Plus, I just feel like a giant douche, sitting way up high like that. They still have a few booths, but they’re generally occupied. So, I have to climb a step ladder to eat my super-expensive meal…Whoever came up with that idea should be terminated at once.

They also have two of those touch-screen self-serve soda machines, which I’ve complained about before. Humans should not be offered that many options. They just stand there dazzled, like they’re being hypnotized onstage by a man in a black turtleneck. I have the same problem when I go to buy toothpaste. Is there really a need for a Vietnam War memorial of Crest? I think not. Plus, half of those beef-eating dolts are confused about how the machine even works… They tentatively push on the screen and take a half-step backward, apparently believing something bad might happen. It’s maddening.

However, despite all that… the burgers were great, the fries were good, and we’ll be back repeatedly. Many, many more times. As long as my sluggish heart continues to slog along.

Afterward we felt disgusted with ourselves, and decided to walk along a lighted trail not far from our house. There were a lot of people out there, even though it was pitch black outside. I was surprised. So, we were passing folks coming in the opposite direction, and I realized nobody was saying anything. No greetings, no “How ya doing?!” So, I did about five minutes on how people are not very friendly in these parts, and how it would be different in West Virginia or North Carolina.

Then I announced that I was going to greet every single person, no matter how deep the scowl on their faces. Toney groaned, but didn’t strongly object.

So I started shouting, “How you doing this evening?” Or, simply, “Hello!” Most responded in a normal manner, but a few only responded begrudgingly. One woman continued walking, as if I’d said nothing. It was an interesting experiment, and I think I’ll continue it whenever we walk. I asked Toney for her opinion, after we were finished, and she said, “I’m pretty sure they all thought you were special needs.”

I don’t know what to think about that, but I will not be deterred! I’m going to FORCE people to be human. At least until I get my ass kicked. Please stay tuned.

I need to call it a day, my friends.  I don’t really have a question, unless you guys want to talk about options. Like, in which situations do they offer too many options? And where could they add a few? If you have anything on that, or whatever else jumps to mind, please use the comments section.