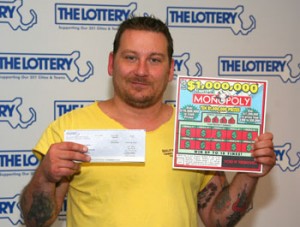 I’ve told you about the time I went on a job interview, back during my West Virginia days, and they asked one question:  What would you do if I gave you an elephant?  That was the entire interview, and it was for a bank teller position.  What in the long swingin’ crap?

Apparently I didn’t provide a satisfactory answer, because a form letter arrived in the mail a few days later that began, “Thank you for your interest in Magnet Bank.  Unfortunately…”  And it went downhill from there.  I still don’t know what the “correct” answer to such a question would be.  Any ideas?

I was thinking about that ridiculous episode last night at work, and started wondering…  If I were in charge of hiring at a large corporation, wanted to “weed out the shitty” as my brother would put it, and was limited to just one question, what would it be?  And I think I’ve got it pegged.

I’d ask:  What would you do if you won five million dollars in the lottery?

Is that perfect, or what?  Much better than a goddamn elephant, that’s for sure.  The person’s answer would tell me many things about him/her, and would allow me to gauge their intelligence, common sense, and decision-making skills.

For instance, here’s how I’d read a couple of the anticipated answers:

Buy a ludicrously expensive car A pure dumbass who doesn’t have a place in the company.  Especially if he starts talking about Italian sports cars, complete with model numbers, or mentions Bentley and/or Rolls Royce.  If that’s the first thing that pops into his mind, a rapidly depreciating piece of flash, he should be given the opportunity to work elsewhere.  Because he’s a bag of shit.

Continue working This person is a liar, and doesn’t have a place in the company.  He’s the type who tells people what he thinks they want to hear, with little regard for the truth.  He should receive one of the form letters that contain the word “unfortunately.”

Give most of it to charity Ha!  Even worse than the “continue working” folks…  Especially if the person provides this boolshit answer with a concerned, deeply saddened expression on his face.  It’s an Oprah-tinged manipulation, and the person doesn’t have a place in the company.  He should be escorted from the building by security guards, and thrown to the pavement in the parking lot.

You see, it’s easy to analyze every answer.  It’s perfect!  I should be heading up an HR department somewhere, with such innovative techniques bubbling up in my brain..  I really should.

Can you think of any other one-question interviews that would give you a window into the soul of applicants?  Since this is just imaginary, let’s not worry about ethics or laws, or any of that pesky stuff…  That’s for suckers.

Also, I’m sure we’ve all engaged in conversations with friends and coworkers about imaginary lottery windfalls.  “What would you do if you won five million dollars?” or whatever.  Why not attempt to analyze the common answers in the comments?  Do it, it’s fun!

And that’s gonna do it for today, my friends.  Please remember the ongoing Yurtathon 2010.  I sincerely appreciate everyone who’s already donated, or purchased shirts, to help me spend a week (or so) in a ridiculous roundhouse in the forest — and finish (finally finish!) my book.  If you’d like to chip in, every little bit helps.  Thanks in advance!

I probably won’t be able to post a real update again until Sunday, but be on the lookout for another blues singer exercise.  I’ve chosen the next room, and know it’ll be a lot of fun.  I’ll try to get that going on Friday.