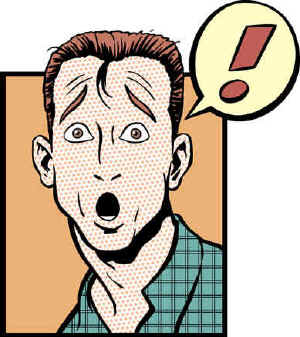 Unfortunately, I don’t have a lot to report on this subject.  It’s fun to see people naked by mistake, but it hasn’t happened to me very often.  I guess I just don’t travel in circles conducive to accidental nudity; it doesn’t usually happen at Target, or The Olive Garden.  And that’s too bad, really.

In fact, I’m going to have to cheat and include the times I’ve accidentally seen women/girls in their underwear.  And even then… it’s a short list of anecdotes.  I hope I’ll be able to live vicariously through you guys, and your stories in the comments.

The oldest, and most jarring story happened when I was a little kid.  Probably third or fourth or grade…  We used to run wild in the neighborhood, and would cut through peoples’ yards, and between houses, with impunity.

One summer morning a friend and I were walking between two cinder block homes, which are situated roughly ten feet apart in Dunbar.  And as we went past one of the windows, there was a woman standing there washing dishes in just a bra.

It was one of those heavy-duty 1970s bras with steel safety cage, sway bars, and straps like seat belts.  The woman was probably in her early thirties, but seemed like an old lady to me.  Our eyes met through the window, we were frozen for a microsecond, then I ran in one direction, and she ran in the opposite direction.  I think both of us shrieked.

And when I’m in the home, smiling and smeared with feces, I’ll remember that day, even after I can no longer recall my own name.

A similar thing happened when I had my paper route.  Except it wasn’t exactly accidental…

I was delivering a paper to an old man who lived next door to the tramps, and I always walked it all the way up and put it in the metal loops underneath his mailbox.  You know, since he couldn’t see very well, and I liked him.

And as I made my way toward the old guy’s front door, I heard a tapping sound.  I looked over, and those two girls — identical twins! — were standing in a window, wearing nothing but their underwear.  Bras and panties, in case you’re unclear on it.  And they began gyrating and pursing their lips and putting on some kind of show for me.

I know this sounds like the beginning of a Penthouse Forum letter, but, in true Jeff Kay fashion, this is all that happened.  Eventually the girls burst out laughing, and dropped the blind.  And I walked crooked, all the way home.

Another time, in Greensboro, my girlfriend and I were walking home from a bar, and saw some girl ironing clothes through a window — in nothing but her skivvies.  But she wasn’t just ironing.  She must’ve also been listening to music, because she’d occasionally put down the iron, and start dancing around the room.

We stood there for about ten minutes watching this spectacle, and laughing our asses off.  My girlfriend sorta knew this chick, and I guess she had a history of mental problems — multiple breakdowns, etc.  Which somehow made the episode even more interesting to me.

And the final anecdote has been told here multiple times.  It was following my senior prom, at a fishing cabin near the Coal River (romantic!).  My date and I went there with another couple, to “party,” as it was called.  Someone had gotten the key in advance, and it was all pre-planned.

We were drinking cheap red wine, and the other couple was also popping some kind of pills.  I have no idea…  I have never ingested the recreational pharmaceuticals, not once.

Anyway, they eventually left us and went into one of the bedrooms.  We could hear them in there hollering and banging around and whatnot.  I barely knew the girl I was with, so it was uncomfortable, sitting on the couch with her, with all these… noises coming through the wall.

In a few minutes my friend came busting into the room, wearing nothing but his white tux pants.  He was all frantic and wide-eyed, and asked for our help.  As he stood there, I noticed the tip of his wiener was hanging out of his zipper.  Good god…

And what did he mean, help?  This was starting to get weird.  But interesting.

We both went into the bedroom, and my friend’s girlfriend was lying on the bed — completely naked — having some kind of seizure.  I assume it had something to do with the pills and the booze, but I was just standing there looking at this nude cheerleader, not believing my eyes.

One vivid memory:  everything was neatly trimmed… which seemed wildly exotic in 1981.

She eventually came around, and continued drinking.  And she didn’t even seem to be embarrassed by any of it.  Maybe she engaged in nude convulsions in front of casual acquaintances on a regular basis?  There’s no way for me to know the answer.

And now I’m gonna turn it over to you guys.  Have you ever seen someone naked by mistake?  If so, please tell us about it in the comments.