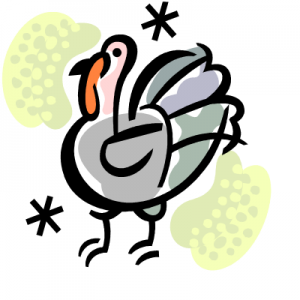 My employer gave everyone a turkey this year, for Thanksgiving.  Which is a nice gesture…  However, we received them last Tuesday and they were already partially thawed and oozing juices.  And I didn’t much care for the oozing.

Since it wasn’t bowling ball-solid, like previous years, I didn’t really know what to do with the thing.  I almost put it in the freezer at home, but something told me that might be a mistake.  Frozen, sorta thawed, then frozen again?  That’s probably not recommended, right?

What the hell, man?  What am I, a food scientist?  What should I do with this big bastard?  It was the middle of the night when I brought it home, and everybody in the house was asleep, so I couldn’t even poll the audience.  It was irritating me that a ball o’ poultry was complicating my life.

So, I just flung it into the basement fridge and told Toney it was there.  I thought I was washing my hands of the deal, but it haunted me all week.  I kept asking people at work, “What did you do with your turkey?”  And I got a long list of conflicting answers.

Some people re-froze it, which caused others to howl in protest.  Many put it in the fridge, like I did, but there was some skepticism about it lasting until Thanksgiving.  Exactly!  It wasn’t a full-blown obsession, mind you, but I nurtured a back-burner concern about that turkey, for a full week.

Until finally… Toney cooked it yesterday.  She wasn’t worried about it, but I think some of my hemming and hawing rubbed off on her, and she decided she’d better shove it in the oven.

But now we’ve had turkey in the house since Tuesday, and a lot of it has already been consumed.  We’ll need to supplement it with a turkey breast for tomorrow’s Fanksgiving feast, and it won’t really feel like a special treat.  Ya know?  We’ve been eating roasted turkey for days, and our holiday calibration has been thrown into disarray.

It was suggested that we get a ham for tomorrow, but I don’t like the sound of that.  Thanksgiving is about turkey, and having ham would be almost like, oh I don’t know, moving the Houston Astros to the American League?  The whole world might tip on its axis.

No, we’re going to supplement.  An additional hunk has been purchased, and we’ll just keep that turkey train a-rollin’.  At least I don’t have to worry about it anymore…  Sheesh.  It was my own personal ‘Nam.

What are you guys going to do for Thanksgiving?  Do you have any special traditions?  Are you traveling, or hosting visitors?  We’ll need to know.  Use the comments link below.

We were going to go to my parents’ house, but that got derailed.  Then they considered coming up here, but the weather is supposed to go shitty on us, so they backed off of that plan, as well.  So, I guess it’ll just be the four of us, and good ol’ Black Lips Houlihan (aka Mayor McStench).

I’ll see you on other side.