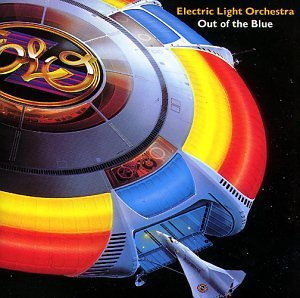 I thought the final LOST was pretty darn good.  I watched the whole thing (almost exactly two hours with the commercials skipped, requiring three beers), and only got five hours of sleep as a result.

What did you think?  Were you satisfied?  I have no complaints… at least not now, in my weakened state.  I thought it was good.  Any opinions?

Over the weekend I downloaded an album I loved in a previous lifetime:  Out of the Blue by ELO.  I used to play the hell out of that thing when I was in high school, and probably hadn’t heard it in 25 years.

eMusic has it for just twelve credits, which translates to five bucks for twenty songs, so I decided to give it a shot.  And as soon as I started listening, memories of a ridiculous trip to Myrtle Beach, in 1980 or thereabouts, came flooding back.

My parents made a tactical error and allowed me and my brother to invite a friend each to come along on a family vacation, and it turned into mayhem.  During that trip Out of the Blue was constantly playing, and will forever be associated with that ill-advised beach trip.

Bill in WV was my guest, and my brother brought a friend named Doug.  And we got into all sorts of trouble, culminating with the owner of the hotel telling my parents that none of us are welcome back.

And I must make this clear:  My folks are NOT like Sunshine, and are/were unaccustomed to being barred for life from businesses.  And they were completely mortified.  They still talk about it, and even after thirty years… they see no humor in any of it.  Heh.

I’m not going to write a complete travelogue of the week, but will briefly tell you about the three events that stick out the clearest in my mind.  There were others, but these are the highlights.

Bill and I took off one night in my parents’ station wagon (hell yeah!), and drove from convenience store to convenience store trying to find one that would sell beer to two underage dumbasses.  Back home we knew where to go (we could’ve published a guidebook), but it was a complete roll of the dice at the beach.

We were turned down several times, and one person threatened to call the cops.  It was a dangerous enterprise, but we soldiered on.  Finally, I went into a strange store/bar, and there were several rednecks standing around in there.

The little voice in my head was telling me to turn around and leave, but I continued to the counter.  The guy was very skeptical, but the good ol’ boys came to my defense, and egged the cashier on.  He sold me a 12-pack of Miller High Life, or somesuch, and the rednecks were snickering and laughing as I walked out the door.

It was excruciating.  But Bill and I spent the rest of the night driving around Myrtle Beach in that station wagon with wood paneling on the sides, drinking beer and listening to ELO.  Oh, I’m sure we were quite enticing to the ladies.

At one point we were in the parking lot of Myrtle Beach High School, I remember, drinking and laughing about that freaky bar and a store.  Or was it a freaky store and a bar?  I’m still unclear.

But it was a good time.  And we were somehow able to avoid being busted by my parents (or the police for that matter), even after six beers each.

One day Bill and I were at one of those gigantic waterslide places, and started dropping stuff off a bridge, onto kids as they went zipping past underneath.

We were pulling off big chunks of hard foam from something (I can’t remember), and we hit one hillbilly child with it, who screamed, “You’re killed!”

We watched as the little bastard went to one of the lifeguards, and was pointing at us.  And the lifeguard started sprinting in our direction.  Uh-oh.

Both of us took off running, and the guy was on us.  “I saw you throwing shit in the flume!” he hollered, and we jumped a small fence, and went down a grassy embankment.

We knew the guy was right behind us, and were running wide-open.  Then we came to a ledge, and had to throw on the brakes hard, to avoid going over.  We stood there and looked down about forty feet, to jagged rocks.

We both came very close to careening off that thing, and it still scares me a little thinking about it.

The lifeguard didn’t say a word to Bill, who calmly walked away, but gave me an entire raft of shit in front of dozens and dozens of rubber-necking tourists.

When I caught up with Bill, after my public humiliation, he was buckled-over in laughter near the arcade.  Thanks for sticking by my side, buddy!  He’d just walked away, with no expression on his face.

And one day, at the hotel, it was raining and the swimming pool was abandoned.  So the four of us (my brother and his friend were involved) threw every piece of outdoor furniture into the water.

Each sank to the bottom, and we thought that was high comedy.  We even jumped in, and set the chairs and lounge chairs upright, so it looked like they were supposed to be down there.  All arranged and everything.

Someone deflated the floats on a rope that separated the deep end from the shallow end, and we pretty much ransacked the place.

Yeah, and the owner caught us, and was not amused.  He started shouting about the cops, and even accused us of stuff we didn’t do.

“I usually only have to replace that filter in the pool once a season,” he hollered.  “But I’ve had to do it twice since you people have been here!  Last time I had to get down on my hands and knees and PRYYYYY the thing open.”

We’ve been imitating that PRYYYY part for three decades now.  Funny as hell.

But things got very ugly when my parents were brought into it.  The guy was not happy, not in the least, and my Dad had to take his abuse on our behalf.

Yeah, and it was a long, tense ride back to Dunbar…

That’s a quick overview of events, I’ve left out lots of details, but you get the idea.  It was just dumbassery unleashed, for a full week.  And we were never allowed to take any of our friends on vacation again.

Did your parents ever make this mistake?  Tell us about it, won’t you?