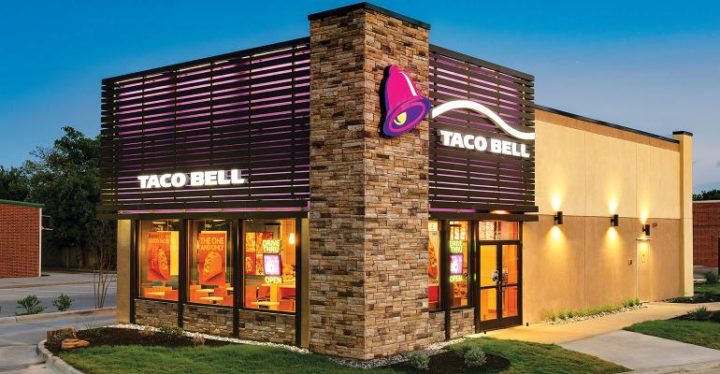 I was in Taco Bell a few days ago, enjoying a Burrito Supreme, two tacos, and a small Baja Blast. Which is my go-to order, by the way. The Burrito Supreme is expensive, compared to everything else there, but it’s so damn good… It’s probably one of the oldest things on the menu, and also my favorite. Here’s how it’s done: I eat one taco, the Burrito Supreme, and the final taco. In that order. And I lubricate throughout with their proprietary Mountain Dew concoction. It’s a system that’s served me well for many years.

In any case, I was sitting there by myself enjoying my meal and taking in all the ambience. And I noticed one of the behind-the-counter zitsters walk down the hall to the men’s room, and tap on the door a few times.

“Yeah?” a muffled voice answered from inside.

“Hey, I’m scheduled until nine tonight. We’re not very busy. Do you think I could get off at eight?”

Then the zitster walked back behind the counter to his questionable compatriots, and shouted, “Score! Trevor just told me I can leave an hour early.”

First of all, the obvious. Why is Trevor shitting up the men’s room on company time? He’s in management and should be leading by example. The bowels can be trained quite easily. You just mentally set aside blocks of time when they CANNOT be engaged. And when it’s no longer a possibility, it’s no longer an issue. Trevor should be demonstrating to his young charges the importance of rectal discipline in the workplace. Already, I don’t have a high opinion of the man.

Also, I’ve been in that bathroom and it’s the size of a phone booth. What if I needed to off-load some Baja Blast, which I generally refill three times per visit? Now I have to hold it (which is certainly the path I’d take), or voluntarily walk into that chamber of ass and fill my lungs with the essence of Trevor? Yeah, I don’t think so. I’d rather piss myself.

Plus, he’s working with food. Right? I have no way of knowing about Trevor’s bathroom etiquette. Perhaps he scrubs in like a surgeon at the end? I seriously doubt it, based on the things we already know. But let’s give him the benefit of the doubt. I suspect he’d still be trailing microscopic poop spores when he returns to the kitchen. Is that too paranoid? I admit that maybe it is. But it’s something that crosses my mind. I think he might be moving inside a highly-active shit cloud, invisible to the naked eye.

And what about the zitster conducting business while his manager is taking a dump? I find that objectionable, as well. Unless, of course, Trevor is a modern-day Lyndon Johnson who insists on such things? Even then, I have issues with it. Different issues, sure, but still issues.

Finally, the part that might actually bother me the most… When the zitster returned to the dubious faction behind the counter, he never once mentioned that Trevor was atop the poop-hoop while they talked. That wasn’t important? How could it not be important?! The younger generation looks at things differently, and I don’t care for it. Sometimes they seem delicate and prone to emotional collapse. But they’re also far more adult about certain things, like bathroom activities. It’s disturbing to me. Within a generation there will be no more fart jokes, because everybody will be taking the “it’s just a bodily function” approach. WTF?? Thankfully, I’ll be gone by then. But I worry about my kids. What kind of world will they be living in?

I need to go to work now, my friends. This was going to be a Few Quick Things update, about many subjects. But once I get started about crapping… it’s hard to get me to stop. And this is as it should be.