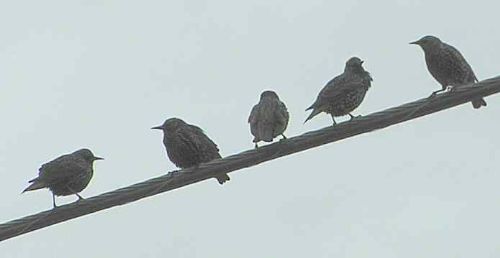 When I was in fourth grade I was riding in a car with my parents and brother, on Washington Street in Charleston, and pointed at the flat roof of a building that was visible from the road.  “Look at all those birds!” I shouted.

Right away I knew I’d committed a tactical error.  I didn’t know exactly what was going on, but saw how my parents reacted, and the look of concern they exchanged.

“You think those are birds?” my mother asked.

“No, they’re rocks.  I think you might need glasses.”

What the?!  I was thrown into an instant state of panic.  Glasses??  That would flat-out ruin my life.  I couldn’t wear glasses to that jackal’s nest known as Dunbar Elementary.  I’d be mocked and ridiculed, unmercifully.  The mere thought of such a thing scared me to my skeleton.  There was simply no way; it was outside the realm of possibility.  I’d be eaten alive.

And what the hell was wrong with me, anyway?  Commenting on birds??  Who am I, Marlin Perkins?  They’re everywhere!  Was it really necessary to shout with excitement, just because I thought I saw a few more?  Am I retarded, or something?  I really needed to learn to keep my Zotz hole shut.

In short order I was inside Dr. Stewart’s office, having an eye exam.  And he gave me the bad news: I needed to start clipping corrective apparatus to my head.  My mother looked at me with sympathy, but went ahead and ordered the glasses that would ruin my life, anyway.  And I was plunged into darkness.  Only two weeks to live…  When those horrible things came back from the lab, my life was over.

They were wire-rimmed, but shockingly big.  This was the 1970s, remember, when there was no such thing as subtlety.  When Doc Stewart had me put them on in the office, I couldn’t believe how clear everything looked.  I had no idea…  The whole world was in sharp focus, and seemed to be brighter.  It was amazing.

But when I got home, and looked at myself in the mirror… deep depression took hold.  I looked like a goddamn freak.  Inside my head I could already hear the cruel laughter.

My mother told me I needed to start wearing my new glasses the next day at school.  She told me people would probably comment on them for a couple of hours, and it would be over.  It was no big deal, she assured me.  But I knew the truth.

So, I didn’t wear them.  I took them to school, but never put them on.  I didn’t have the courage.

And somewhere along the line my mother figured it out.  I don’t know how, but she knew I was lying about it.  She assured me I’d be punished if I didn’t start wearing the new glasses immediately.  It’s a wonder I didn’t worry myself gray over all that crap.  I was fully stressed.

And the next day I held a book in front of my face, slipped the glasses on for a split-second, and quickly returned them to their case.  Nobody noticed, and I was able to tell my mom — without lying — that I’d worn my glasses at school.  She bought it, and I repeated this ritual daily.

Then baseball season rolled around…  My parents wanted me to wear my glasses while playing, but I wouldn’t do it.  They didn’t understand, since everyone was surely used to them by now.  What was the big deal?

Of course months had passed, and not a single person outside our house had actually seen me wearing those stupid-looking WWII Japanese soldier specs.  I was in a bind.

There was yelling, and probably some crying, but I wouldn’t budge.  There was no way I was wearing my glasses while playing baseball.  I was told I’d either wear them, or quit the team.  I said I’d turn in my uniform, and my mother flew off the handle.  She’d had enough of this crap, and all my options were officially off the table.

She took me to practice that night, and stayed there.  Usually I just rode my bike, but she accompanied me on this day.  And I was forced to take the field in my ridiculous Elton Johns.  I was awash in perspiration, and felt like I was walking the green mile.

And nobody gave a shit.  The end.