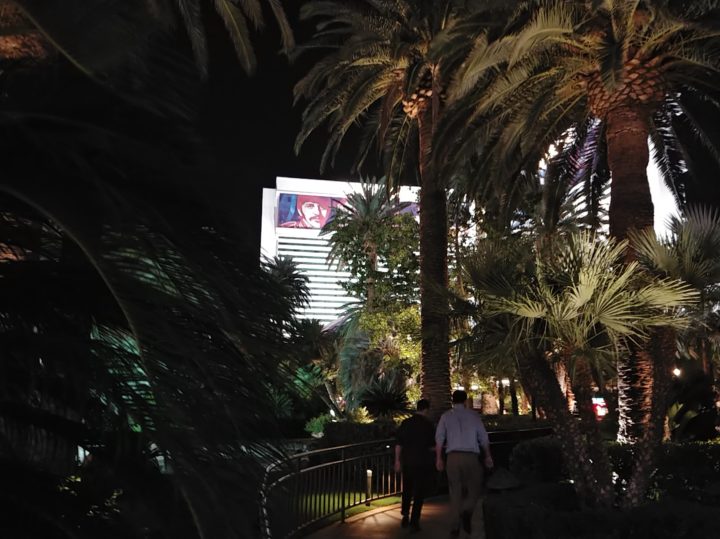 The day of the Grand Canyon. I talked about this adventure in Episode 21 of the podcast. You can hear it here. It was… The Longest Day.

We would be returning home the next day, and the weight of that fact was already dragging me down. Sure, there was another 24 hours of living in this highly-distorted fantasy world. But the end was near, and I was getting preemptively depressed.

Of course, we started with the breakfast buffet. I was a complete pro by now, and the guy at the omelet station greeted me like an old friend. Ugh. Sadness… I asked for ham, green peppers, and a little onions in my omelet. And, of course, a load o’ cheddar near the end. Excellent as always.

Then we took the monorail down to MGM and that area again. It felt like we should at least walk through some of the top casinos we hadn’t hit yet. MGM is sprawling and outrageous, but its size is the only thing memorable about it. Right? The coolest, by far, from that day, was New York, New York. That place was something unique.

Outside it looks like the NYC skyline, and inside they have it set up like you’re walking the streets of New York. Check out the pictures linked below. That place is very cool, indeed. However… I went into a bathroom and it was trashed. That makes me wonder how it would be to actually stay there. I’m skeptical. I think you can tell a lot by the quality of the bathrooms. The Mirage, for the record, provides a palatial Poop Palace for patrons. It’s a shitatorium straight out of Architectural Digest. New York, New York? Not so much. But it looks cool as hell, and it’s a great concept.

We sat on “Bleecker Street” and enjoyed a couple of $4 bottles of water, discussing what we should do with the rest of the afternoon. We were in danger of wasting the day, I could feel it. But Toney eventually said, “How about we go to that pinball place, after all?” It was a place we’d talked about visiting, then removed from the list. It would require two more semi-expensive Uber rides, and I just didn’t feel like Toney was into it. So, I reluctantly allowed for its removal from the docket. But now it was back, baby!

The Pinball Hall of Fame is away from The Strip, but not that far away. It’s in a nondescript building that would be easy to miss, but inside it’s paradise! BTW, the Uber driver who took us out there was the worst of ’em all. She wasn’t completely rude, but it was bordering on it. I gave her no tip, and that was the only time that happened.

Anyway, the place was just great. It was one of the best things we did during the whole trip. It’s loaded up with old pinball machines from the 1940s to the 1980s. And you can just play them, for 25 cents each. There’s no fee to get in, you can just stroll into the joint and start playing great old games from the old days. An absolute blast! Toney was even into it, and that surprised both of us. We spent about thirty bucks there, and that’s a lot o’ quarters. Great fun! Highly recommended.

The driver on the way back to the MGM was a storyteller of the highest order. He was originally from Louisiana but has lived all over. While he was in the service, he told us, he was stationed in Alaska and they had massive numbers of giant mosquitos with white feet. White Socks, they called ’em. He said they had to wear face nets when they were on guard duty, and he could hear the buzzing of those things in his sleep. He received the max tip: $5. Good guy… as far as I could tell.

We took the monorail back to the Linq Promenade and had dinner at In N Out burger. And I know this might be controversial, but I was never a HUGE fan. Oh, it’s fine, but it’s not as great as people will tell you. It has a cult, and that’s why we went there, I have to admit. We gotta hit In N Out before we go back, I kept saying.

We got two Double Double meals, and they were OK. The fries are always like chalk sticks, but the burgers were good enough, I guess. Is that controversial? I ate there many times when we were in California, mostly because there was one very near our house. It’s fine. But Five Guys is better, much better.

Then we hit the rock n roll Walgreens again for beer. We had to carefully calibrate it, so we wouldn’t be leaving any beer behind. Ya know? We returned to the room, began our drinking regimen, and prepared for the Beatles Love show that evening.

I’ve never been to any kind of Broadway show or any sort of Cirque Du Soleil type of thing. So, I didn’t really know what I was getting myself into. But it was fun. They had bars open, of course, and everybody was boozin’ in there. Everywhere, at all times! But we’d pre-loaded in the room, and opted not to pay the ridiculous prices.

The show was basically Beatles music blasting, and acrobats etc. doing all sorts of craziness. One segment, while Within You Without You played, almost blew my mind. It involved a bed with kids on it, which was hoisted high in the air and the sheets kept expanding until it covered the entire audience. I’m not doing a very good job of explaining it, but it was crazy. My brain had a difficult time parsing the information that was being fed to it.

And there were parts where people were on roller skates, and other parts when they were bouncing on trampolines. And people were swinging from ropes… It was entertaining, for sure. No regrets. We’d paid about $100 each for the tickets, which made me twitch a little. But I’m glad we did it. It was an adventure and a memory.

After one final visit to the breakfast buffet, we checked out and took an Uber to the airport. I was near tears. How could it be over already?? We had a layover in Denver, then flew back into Philadelphia. The last leg was not sold out, so we had a seat between us again. But it was still uncomfortable, and unpleasant. It cost $66 for parking at the Philly airport, and then we had to drive 2.5 hours home. I was bouncing around from one Sirius/XM channel to the next, as Toney dozed in the passenger seat. It felt like it would never end. But we finally arrived back at our house around 2 am. The boys did reasonably well. It wasn’t 100% perfect, but not bad.

And I’m ready to go back… It was great fun.

Here are some photos from Thursday and Friday. They’re a little New York, New York heavy, but I thought that place was cool. That Crescendo pinball machine was the one I had the most success with. I won FIVE free games! Hell yeah. And the “just married” woman at the bottom got on our plane on Friday to uproarious applause. Needless to say, I just sat there.

If you’re a supporter at Patreon, I recorded a Thursday episode of the podcast with random odds and ends from the trip that didn’t make it into these updates. It’s pretty good, I think. Check it out here.

And I hope you guys enjoyed this. I’ll get back to the “normal” stuff on Monday.