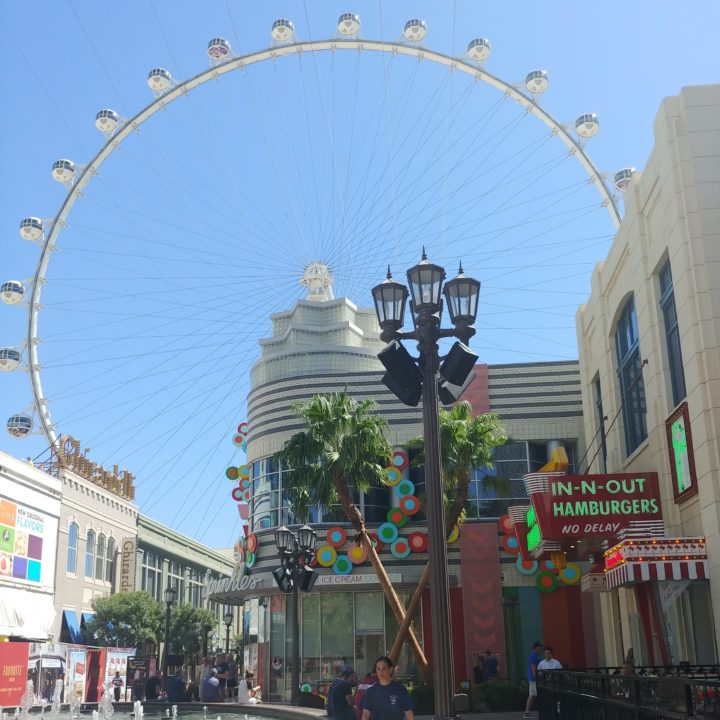 We started with the breakfast buffet, of course, and it was very good. By this point, I’d developed a buffet system that walked right up to the gluttony line but didn’t really cross it. Oh, I had it down, my friends. I wish I had access to such a thing every day of my life. Maybe I could live full-time in a hotel at some point? Like Howard Hughes or Little Richard?

After the food foundation was in place, we started walking around and going in and out of various casinos. Including The Linq and The Venetian. The latter was fairly fancy-pants, while the former was pretty much what you’d expect. Sprawling… smoke-filled… high-end yet somehow sad…

We eventually found ourselves on the Promenade at The Linq again, which is the photo above. It’s like an alleyway filled with restaurants, bars, and shops. We sauntered through there, and it was hot again. I mean, super-hot. We bought two bottles of water for $4 each(!!) and sat on a bench for a little while.

“Wanna go on that big bastard of a Ferris Wheel?” I asked.

Toney seemed surprised because I’m not a huge fan of heights. And this thing is the tallest Ferris Wheel in the world, supposedly. But you’re fully enclosed. I could handle that. If you went up with your legs dangling and a bar across your lap, like at Knoebels, I’d be in the ‘no fucking way’ camp. But this thing had air-conditioned pods.

It was $25 each, and, of course, they asked if we wanted to upgrade to a pod with an open bar. WTF?? I like to drink, it’s well known, but they shoehorn boozin’ into literally everything out there. We passed on that generous offer and waited for our pod to come around. I was hoping we’d have our own since it wasn’t very busy. But we had fellow travelers. Oh well.

We had lunch reservations at Hell’s Kitchen, one of Gordon Ramsay’s restaurants. We wanted to go but didn’t want to fork over two hundred bucks for dinner. So, Toney made lunch reservations. It’s part of the massive Caesar’s Palace complex, and we had trouble finding it inside that casino which is roughly the size of my hometown.

We started with the Hell’s Kitchen House IPA, made especially for the restaurant by Stone Brewing in San Diego. Our waitress brought them out in very tall glasses and put Toney’s down with no problem. But something went askew when she attempted to move mine from the tray to the table. Everything tilted, she attempted to correct… and the beverage was slung all over an old man eating a salad nearby. I mean, he was fully drenched. Heh. Everybody came running and offering apologies, and the old guy was understanding about it. He didn’t have much to say. But the part that cracked me up was that his wife just kept on eating. She didn’t miss a beat. Good stuff.

The waitress brought me a new beer, and it was good. As I knew it would be. I ordered the “standard burger,” and Toney went with some sort o’ personal pizza. Everything was really, really good. I mean, seriously. And we even saw Michelle, the winner of the Hell’s Kitchen TV show, who was awarded the head chef job at the restaurant. She came strolling through a couple of times. The place was pretty crazy and noisy, but the food was top notch. I think our total bill was something around $70. Not bad.

After lunch, we took the monorail to Bally’s and Paris and that area. After checking out a few casinos we ended up at a place called Beer Park. It supposedly overlooks The Strip, and we had it penciled in as someplace we wanted to check out. But they were rude to us, and we left after one beer (and a $1 tip). I mean, they were just shitty for reasons unknown. And they were treating the people beside us like crap too.

Toney said it was ageism, that’s it’s a place for young people. But I don’t know about that. I think they might just be disgruntled bitches and bastards. It’s hard to know, but we didn’t stick around long. Plus, it was outside and impossibly hot. So funk dat.

We ended up walking through the Paris casino and saw some place called Burger Brasserie, which was advertising some kind of kickass happy hour. Maybe two-for-one drinks? I can’t remember the details, but we went inside. And we had a blast in there. The bartender was hilarious, and the other people sitting at the bar were a lot of fun too. It was completely impromptu, and one of the best drinkin’ experiences of the whole trip.

By that point, we had a pretty good buzz on, and we headed back to our hotel. We took the monorail back and was walking through The Linq, deciding what to do next. Toney took half the Hell’s Kitchen pizza home with her and told me she planned to eat it for dinner. “So, I’m on my own?” I asked. “I guess,” she responded.

So, we parted ways and she headed back to The Mirage. And I took a hard left and went back out on the Linq Promenade. And I made a second visit to Gordon Ramsay’s Fish and Chips. Good shit, man… It was packed again, and I had half a snootful. There were a couple of elderly Asian women sitting at one of the picnic tables, and I just flopped down beside them. “Care if I sit here?” I asked after I had a big hunk of fish in my mouth.

They eventually left, and a British couple asked if they could sit with me. It was a communal situation. I talked to them, and they were cool. The food was spectacular, of course. At one point I said, real loud, “Yeah, this is good, but not quite as good as that Long John Silver’s.” You know, just to be provocative. I got a few chuckles, but not as many as I deserved.

And that was that. We had to get up very early the next morning for The Grand Canyon (aka The Longest Day), so we called it an early night. It was a good day. We had fun.

Here are some photos from Tuesday. Trigger warning: there are two pictures of food. Proceed accordingly.

UPDATE: I didn’t know if I was going to have it back in time, but the podcast producer just sent me Episode 22. If you’re a Patreon supporter, please check it out. I think it might be one of my favorite episodes so far. Here’s the description:

This is one of those surprising episodes in which I didn’t really know what I was going to talk about five minutes before I started recording, and it turned out better than some of the ones I planned for hours. Go figure. It’s basically just a collection of random notes from the Las Vegas trip, which didn’t make it into the Surf Report updates. There are some laughs, I think. I hope you enjoy it. And, as always, thanks for the support!