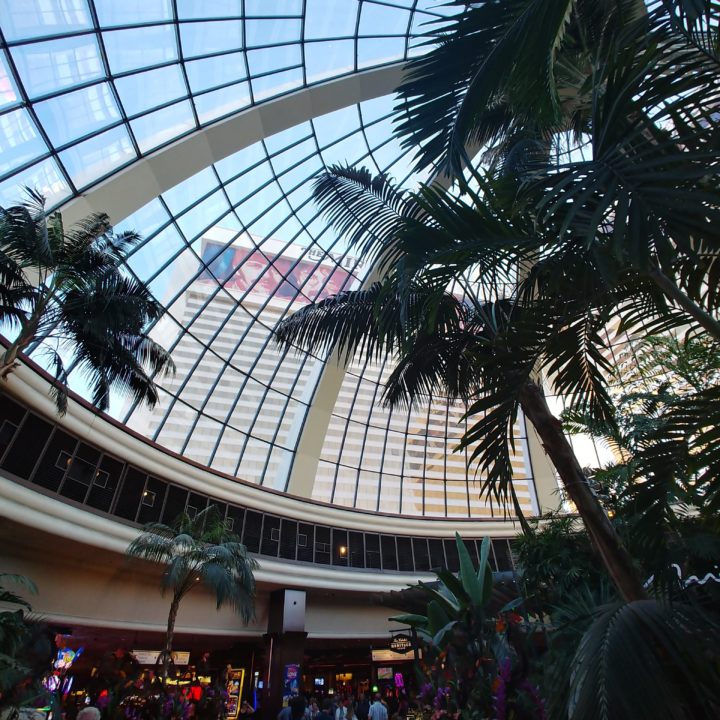 I’m going to try to keep this thing under control. Once I start on these big epics, I tend to get carried away and go way too deep with it. But I’m going to attempt to give you guys the highlights (and a few photos) of our big 25th Anniversary trip to Las Vegas in two updates, and one podcast. Even that seems ridiculous, but I have some good stories, I think. So, today I’m going to cover Sunday through Tuesday here, and Wednesday in the podcast. How’s that sound? Let’s get started, shall we? 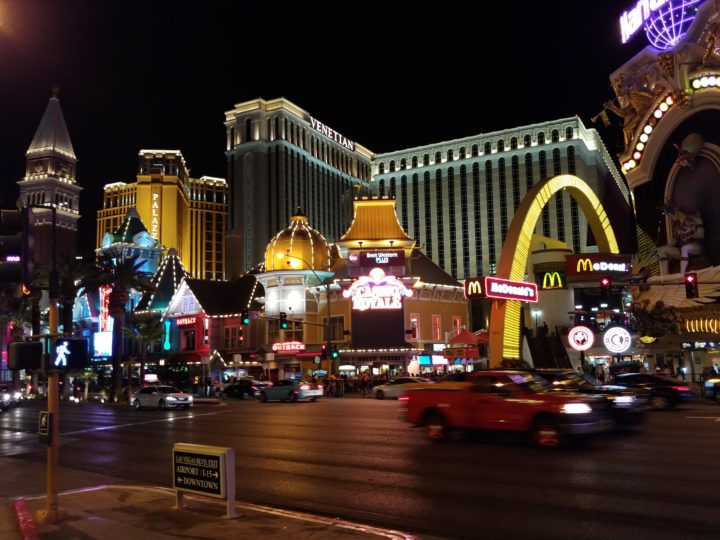 I couldn’t sleep Saturday into Sunday, because of all the craziness that would be happening the next day. I might’ve gotten four hours, but I’m not even sure about that. We left our house about 8 am and headed toward Philadelphia, where our flight was scheduled for 12:40 or somesuch. We gave the kids one more warning speech and told them we’d see ’em in a week. Gulp.

It was rainy and cold and felt like full-on fall out there. It put me in a good mood. There’s nothing better than a dreary overcast day. 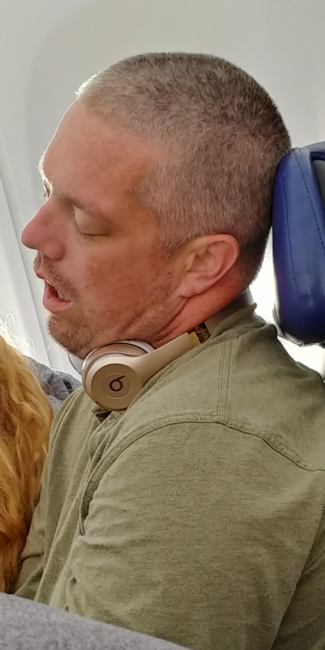 The flight was on time but packed to the hilt. I was jammed between Toney and some hipster and was riding on the cusp of a full claustrophobia freakout the whole time. But I maintained. We landed in Chicago a couple of hours later, but it felt like six hours. Or maybe ten. I’m not a fan of Southwest’s seating scheme, where it’s basically first-come-first-served. That’s boolshit.

This guy was across the aisle from me. Good times.

Anyway, we had a two-hour layover in Chicago and scarfed down a burger each from a Billy Goat Tavern outpost. I’ve been to the original location and remembered that it was pretty good. But the burgers on Sunday were only so-so. The buns were good, I’ll give them that much. Then we just hung out and charged our phones before the people-packing re-commenced.

However… right before they started boarding, an announcement was made that sent shockwaves through the poorly-dressed and fat-wrapped crowd: there will be 45 open seats on the flight! There was spontaneous applause. So, Toney and I had a seat between us, and that made it a million times better. But, people were coughing and hacking on that thing like we were in a 1956 tuberculosis sanitarium. Good god!

When we finally arrived in Las Vegas I summoned a car through Lyft. I generally use Uber but had two $5 credits. An Asian man named A&W (or something similar) picked us up in a fancy SUV and took us to The Mirage. He was friendly but not super-interested in chitchat. I snapped the photo at the top as we walked in. It’s a beautiful place, some kind of rainforest oasis in the middle of the desert.

Oh, and by the way… when we left Philadelphia it was 55 degrees, and 104 when we landed in Vegas. Yikes.

We went up to our room and it was nice. I wished the view was better, but whatever. Why start looking for negatives, right out of the box? There would be plenty of opportunities for such things. 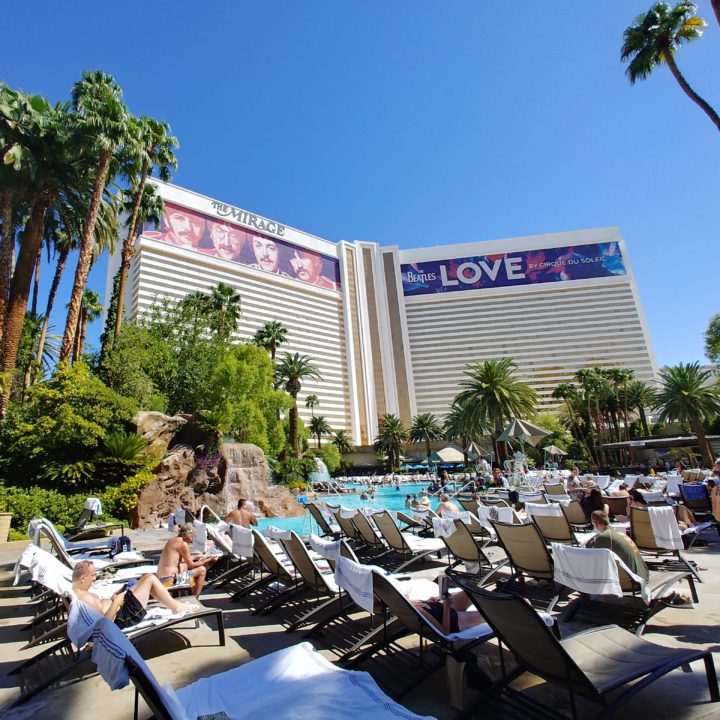 Across the street was a Walgreens that we’d already scoped out via the internet. They sell beer and wine and liquor, and various other essentials. So, we headed over there, to get our room set up for the stay. And man… that place was crazy. It was all about the booze, and it felt like everybody was already drunk anyway. They had many, many cashiers and just rapidly cycled through the customers. Wild shit. We bought a 12 pack of Sierra Nevada and various other items, including a questionable environmentally-correct “cooler.”

The nighttime picture above was snapped during one of our excursions to the Rock n Roll Walgreens as I dubbed it. You can’t see it in the photo, but it’s over there somewhere. I was there a half-dozen times, and it was ALWAYS raucous. 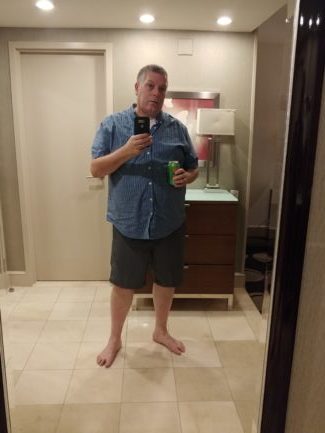 After we got our room in order and enjoyed a couple of well-earned adult beverages (see me drinking to the right), we headed over to Gordon Ramsay’s Fish and Chips for dinner. It’s on The Linq Promenade, which is a fancy-ass alley lined with businesses, basically. It’s just a carryout place, where you order at the counter. Freaking fantastic. I don’t know if I was just hungry, or what. But that shit was great.

And do you see how it goes? I’m a full update into this thing and barely finished with Sunday. I’ll have to write on Tuesday and Friday, I think, in addition to Thursday. In the meantime, here’s your link to the Monday podcast. And this is the description:

In this one, I  tell you about our day trip to the Grand Canyon during our recent Las  Vegas visit. Was it worth it? Was it fun? Well… you’ll just have to listen to find out. You’ll also get to meet The Spaniards, the unfriendly hippies from Luxembourg, Bucket Boy, the woman who barely escaped a horrible sandwich death, and  a cast of thousands. Oh, it was quite memorable. And the Canyon was pretty interesting too.

I’ll be back tomorrow, my friends. I hadn’t planned on it, but need to get this story on virtual paper before I forget two-thirds of it. I’ll also post some Grand Canyon photos to go with the podcast episode. Have a great day!

See you on Tuesday afternoon.