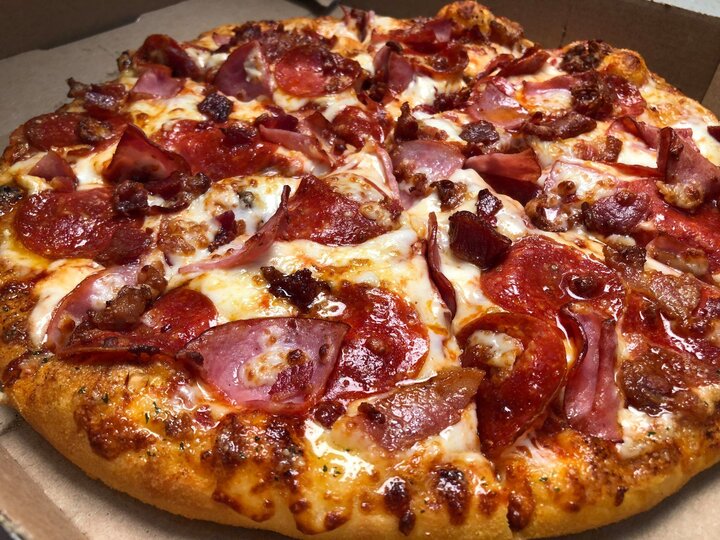 As you’re probably aware, I’m a portly gentleman who knows a thing or two about the wonders of fast food. Heck, one of the biggest highlights of our recent Florida vacation was when I had my very first Butterburger at a Culver’s. I mean, the airboat ride through the swamps was fun and so was Spring Break at Clearwater Beach. But, Culver’s! Now, that’s a real adventure.

In any case, my “research” has revealed what I sincerely believe to be the best bang for the buck in all of fast food. Sure, Burger King has a stellar value menu and their food is better than people want to give them credit for. And McDonald’s always has that two McDoubles for three bucks deal going, plus the $1 any-size sodas. Both are good in a pinch. But the best of them all? You ready? It’s the large three-topping pizza at Domino’s, for $7.99. 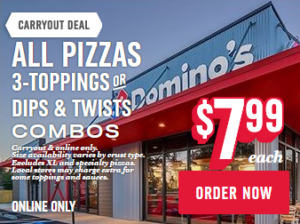 Yes, there are some hoops you have to jump through, but suck it up Mr. Delicate. All you have to do is order your pie online or through the app, and pick it up. If you agree to those two caveats you get a sizable pizza with your choice of three toppings, for eight dollars. And Domino’s makes good pizza. They didn’t used to, but all that’s changed. Oh, I’m not saying it’s the best pizza in the world. But for national chain fast food-style it’s pretty damn solid. Unlike the bowel movements you’ll be having if you don’t choose your toppings correctly. 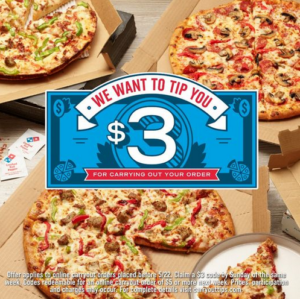 So, right there it’s a fantastic deal, right? You can get a large hand-tossed (heh) or a medium pan for that price. Eight dollars! A stupid Big Mac meal costs more than that, and you’re getting an entire pizza that’s shockingly good. It’s enough for two people, at least. But check this out… Now they’re giving you a three dollar “tip” for picking the pizza up instead of having it delivered. It’s good for your next order, if that happens within a week. So, it knocks the already crazy deal down to five dollars. It’s incredible. I’m thinking about buying one today. I have one of those tips burning a hole in the pocket of my fat pants.

Do you know of a better deal? What do you believe is the best fast food bang for the buck? I desperately need to know.

And by the way, I constantly mix up the topping combinations, just to keep it interesting. One of my favorite recent combos was the medium pan with pepperoni, diced tomatoes and shredded Parmesan/Asiago. For some reason there’s magic when those three are combined. But I’ve tried many others, and attempt to not repeat myself. I even considered installing a randomizer on my computer, entering all the topping choices, and letting it choose the combinations for me. There are a few that I don’t like and would never order (hot buffalo sauce, banana peppers, black olives) and a couple that are extremely iffy (Feta, mushrooms). But that would be the fun of the randomizer, right? You win some and you lose some.

For the record, here are the topping choices: 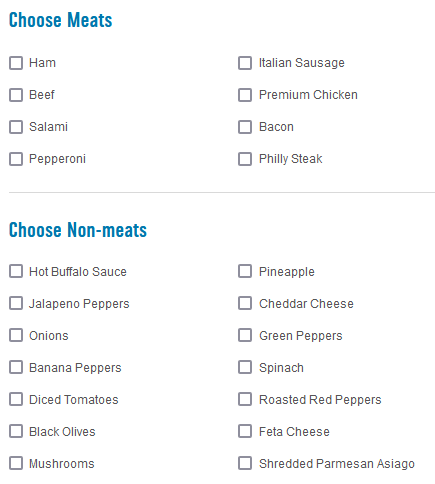 If you were to order a pipin’ hot pie right now, which of the three would you go with? Please share your thoughts in the comments. What would be your topping combination(s), and is there a better deal in the entire fast food world? Also, which toppings would be on your NEVER list. Bring us up to date on these pressing issues.

Ha! This feels like a Domino’s sponsored post, but it’s not. It’s just some guy thinking about lunch and following his passion.

Oh, I almost forgot. The last time I ordered that deal the guy handed my pizza to me in one of those warming bags that delivery drivers use. What the hell, man? They’re taking that “you’re the driver” gimmick a little too far. Check it out. What am I supposed to do with this thing?? It’s substantial, not some cheap piece of crap. They’re doing this with every pizza?! What the hell is going on? Eventually I won’t be able to get the trunk lid down on my car. Also, I think it should be “Take Home” not “Bring Home.” Am I wrong about that? 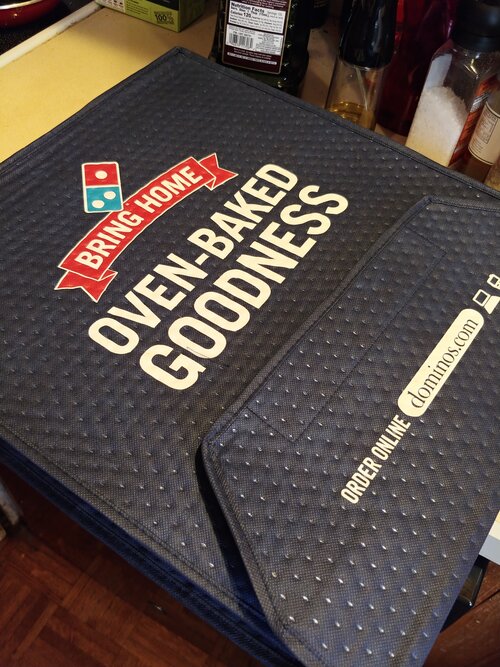 Before I call it a day here… If you haven’t checked out my latest No New Jeffs column, here it is. I’m pretty happy with it; I hope you guys agree.

I’ll be back soon. Have a great day!