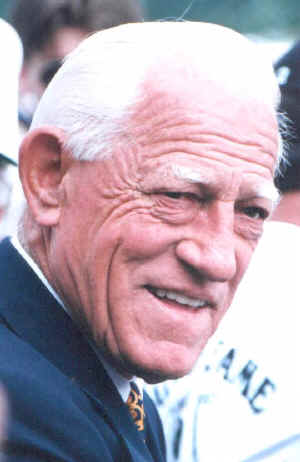 Sparky Anderson has died, and that’s the kind of news I don’t much care for.

I grew up obsessing (obsessing!) about the Cincinnati Reds, during the Big Red Machine years, and even got into a couple of fistfights with the disrespectful along the way.  That team was a big part of my young life, and Sparky was the leader.

During the time, of course, there were no 24-hour cable TV networks, or any of that.  So, I followed the team via radio.  We lived inside “Reds country” so every game was broadcast locally.  Marty Brennaman and Joe Nuxhall were the announcers, and they were practically members of our family.  At least it felt that way.

When the Reds were playing on the West Coast, and the games started at 10:30 at night, I’d fall asleep listening.  I had a weird-looking round radio on my nightstand, exactly like the one here, except white.  And that was my spherical Cincinnati Reds delivery device.

One time Marty and Joe came to Charleston, as part of their pre-season barnstorming tour.  They appeared at a local college, gave fans an update on what was happening and what we could expect during the upcoming season.  Then they took questions from the audience.

A half-wit from Dunbar, a guy we sorta knew, stood up and shouted, “What about Bench?!”  There was no context to his question, and Marty said, “What about him?”  All of us about fell out of our chairs laughing.  Wotta fantastic, fully-realized douche.  Thirty years later, we still shout that question occasionally, at completely random times.

During Junior High I was at the height of my Reds obsession, and my parents always allowed me to skip school on opening day.  And how cool is that?  Back then the Reds opened every season, because they’re the oldest Major League team, with a day game.  So, my folks allowed me to be “sick,” since it was practically a religious holiday for me.

But for some reason I went to school during the morning one year, then disappeared at lunch.  The next day I was pulled into the vice-principal’s office, and he wanted to know what the hell I thought I was doing.

“It was opening day,” I shrugged.

The Enforcer eyed me for a couple of seconds, apparently deciding how to proceed, and finally said, “Billingham looked pretty good, didn’t he?”  And we ended up talking about the Reds for fifteen minutes.  Baseball, as it turned out, was a perfectly acceptable explanation for truancy.

And Sparky Anderson was at the middle of all the magic.  I can still see him walking slowly to the mound, stepping carefully across the first base line because he was superstitious about such things, and signaling to the bullpen that a new pitcher was needed.  He was an old-school baseball guy, who chewed tobacco, probably cursed like a sailor, and didn’t put up with any nonsense.

I didn’t know him personally, of course, but couldn’t have been more fond of the man.

No, I didn’t know Sparky Anderson, but I did meet him once.  He made an appearance at a minor league baseball game in Charleston.  I went, hoping to shake the great man’s hand.  I also took along something I thought he might find interesting:  a 1960 Topps baseball card, from his playing days.

I thought this prop might trigger an actual conversation, and when I was finally in Sparky’s presence I asked if he’d sign the card for me.  I handed it to him, bracing for his reaction.  But he just signed it, and passed it back to me.  Bummer.

My dad and brother met him, too.  We were in Cincinnati for a few Reds games, and Sparky came walking through the lobby of our hotel.  My dad reportedly said, “What do you say, Spark?”  And my brother almost swallowed his tongue.

But “Spark” stood there and chatted with them for a few minutes, and was very friendly, I’m told.  The fact that I was still upstairs in the room, and missed this encounter, still pisses me off.

So, anyway…  Sparky’s gone, along with another big chunk of my childhood.  Tonight I shall hoist a vessel of the golden elixir in his honor.  He was one of the greats, without question.  And if you say anything different, we might need to take it outside.