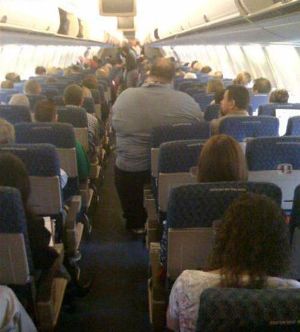 I used to fly quite a bit, but it’s a rare occurrence nowadays.  The last time I was on an airplane was our return flight from England in 2008, and before that… it was prior to 9/11.  So, I don’t have any recent experiences to talk about.

But I definitely have a Worst Flight Ever story, and hope you guys do as well.  After I’m finished, please use the comments section below to tell us your tales of massive discomfort at 30,000 feet.

I’ve flown through some bad turbulence, which caused me to grip the armrest and exert diamond-making pressure with my sphincter muscle.  One flight in particular, on a puddle-jumper coming into Charleston, WV, was especially memorable.  Patsy Cline, Buddy Holly, and Lynyrd Skynyrd songs were playing inside my head.

But my Worst Flight Ever happened shortly after we moved to California.  Toney and I were in a funk, and feeling homesick for Atlanta.  We’d only been in our new house in Santa Clarita for a month or so, and had no business taking a trip back to Georgia.  But, of course, that didn’t stop us from doing it.  I took a few days vacation, we quit work on setting up our new place, and attempted to go home again.

We only had one kid at that point, and he was a tiny baby.  He was small enough that we didn’t need to buy a ticket for him, Toney or I just held him on our laps.  Almost immediately upon boarding, we noticed he was hot, and possibly running a temperature.  He’d started crying, too, and causing people to shoot us dirty look before we’d even gotten off the ground.  Simply fantastic.

We were wedged into those straitjacket coach seats, but Toney successfully extracted a thermometer from the diaper bag, and he was indeed running a fever.  And crying, full-out.  What the hell, man??  I hate being a nuisance.  I hold people to high standards in that department, and have even higher expectations for myself.  I’m the guy you want to get behind in line at the grocery store, and also sit beside on an airplane.

Usually, anyway.  On this day we were making everybody annoyed, and I felt self-conscious and embarrassed by the whole thing.  I’m not an idiot, and realized he might cause a few problems during the flight, but this was over-the-top.

Then he power-shit his diaper.  There was a loud noise, like an almost-empty mustard bottle, and a rolling stink that you could almost watch progress up the aisle.  It was like a giant bowling ball of stench, cascading through the airplane.

Toney got him cleaned up, and gave him some medicine to bring his fever down, but I remember him crying quite a bit, and shitting several more times.  It was completely horrible.  Everybody on that plane wanted to murder us, and I didn’t blame them.

When we FINALLY landed, Toney was feeling a bit off, and she ended up being sick for the rest of the trip, as well.

We rented a room at a Red Roof Inn, on North Druid Hills in Atlanta, and it was ludicrous.  The elevator was inside our room, literally.  Oh, it was walled-off, but the thing ran through the center of our rented space, eating up at least 50% of the square footage.  It was really loud, and caused the temperature to fluctuate, for some reason.  It was like something off Green Acres.

Since Toney and the boy were sick, we didn’t get to enjoy Atlanta much, and took off in a rental car toward my parents’ house in Charlotte.  And guess what?  They both came down with the mustard bottle disease, as well.  Everybody was shitting up a storm, vomiting, etc.  Everybody except me, that is…  I just got to sit there and marinate in the aroma and good vibes.

And now it’s your turn.  What’s your Worst Flight Ever?  Please use the comments link below.