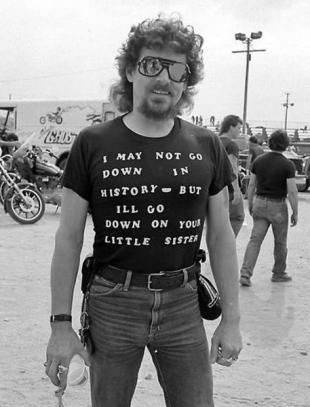 When I was in elementary school, during fifth grade or thereabouts, a kid started wearing a t-shirt once or twice a week, featuring two cartoon pigs having sex, and the words “Makin’ Bacon!”

It was amazing to me, for several reasons. For one, I’d never been to a place of business – outside of Myrtle Beach, SC – where such a garment could be purchased. This was mid-1970s West Virginia. It certainly didn’t look like a shirt the Montgomery Ward in Charleston would carry. And I assumed he bought it himself, because no parent would ever sign-off on such a thing. Right? But what about the laundry? His mother had to know about it. Was it possible that he wore it around the house, in front of his parents and grandparents, etc.? Incredible. I didn’t live in such a world.

Plus, he wore it to class, and never got into trouble! As far as I know, nobody said a word to him about it. He wore it all the time, for years. Hell, he’s probably got it on, right now.

Similarly, during high school there was a cigarette-smoking, drug-taking, intimidating-on-every-level Future Inmates of America chairman, who regularly showed up in a shirt with the words SUCK A ROD on the front.

It was just a white t-shirt, with red iron-on letters. Needless to say, there wasn’t much attention to detail. The letters were not lined-up right, and the spaces weren’t consistent. It bugged me, on an aesthetic level. But what do you expect from a guy who probably set hospice fires?

I assumed the school administration decided to pick their battles, and not hassle this guy over his choice of attire. It was probably far down the list of grievances. But it still blew my mind whenever I saw him terrifying his way down the hall, with SUCK A ROD on his chest, inside a public school building.

When I lived in Greensboro, I returned to Dunbar once or twice a month, and drove through some rural-ass mountain communities in Virginia. I mean, this was the land that time forgot.

One time I stopped at a charming-looking general store, to buy a soda or whatever. And I was surprised to see they carried a sizable selection of racist t-shirts, belt-buckles, bottle openers, etc. One shirt had Klansmen on it(!?), with the words “The original Boyz n the Hood.” WTF??

There was another one, featuring Martin Luther King, that I don’t even want to talk about… Wow!

I bought a Coke, because it suddenly felt like I was the subject of scrutiny, and got the hell out of there. The guy behind the counter looked like something out of The Hills Have Eyes, and I couldn’t believe I’d somehow stumbled into a living, breathing Ugly Stereotypes of the South museum. Everything was on display right there, inside a small Mom ‘n’ Pop grocery in rural Virginia.

As I drove away, I wondered if they had a vendor who came by once a week, in a panel truck with Racist Souvenirs by Delbert painted on the side. In my mind, the driver always tipped his Confederate cap to the bread guy, in a show of route-man solidarity, restocked the “Rap is Short for Crap” back-scratchers, and asked the protruding-forehead owner if he’d thought anymore about maybe offering something from his new anti-Semitic line. But, he was always shot-down: “We just ain’t got no Jews up here to hate, Delbert. Sorry.”

Anyway… I’m calling it a day, my friends.  In the comments section, please tell us about the inappropriate clothing you’ve encountered during your travels. What have you seen that made you think, “Good god! Who would buy such an item?!”  Or maybe you remember someone from your schooldays, like good ol’ SUCK A ROD, who somehow got away with pushing the envelope, again and again? Please tell us about it below.