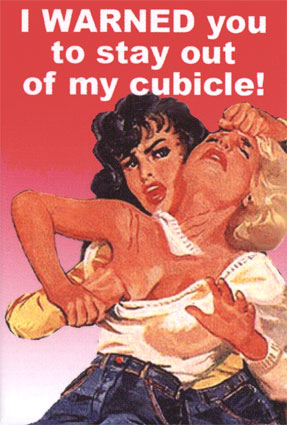 Because I’m now old and broken down, a veritable husky husk of a man, I’ve racked up quite a few experiences.  And naturally, that extends to my work life.

Over the years I’ve encountered all manner of workspaces, ranging from no desk whatsoever (“Just get to work, ya bag of shit!”) to a cushy private office overlooking Warner Bros. Studios in Burbank.  And everything in between.

That California office was certainly the most interesting.  Since it was adjacent to the studio, we’d sometimes receive emails giving us advance warning of unusual activities that would be going down later in the day.

One, I remember, told us not to be alarmed if we heard several loud explosions during the afternoon.  It wouldn’t be an emergency, they assured us, just the filming of an episode of Charmed, or whatever.  Another time they tipped us off to a “helicopter rescue” that would be taking place the next morning.

That office also came equipped with a great stereo, and a computer with absolutely no filters installed on it.  The job itself was a real ball-masher, but my workspace was fantastic.

I’ve also shared offices with people, which has its good points and bad.  In Atlanta one of my officemates LOVED speed metal, and death metal, and all that crapola.  We’d take turns playing CDs on the communal stereo, and it seemed like his discs played for three days each.  He was a black dude who loved Cannibal Corpse and Sepultura, and that kind of thing.  Excruciating.

But the worst of all possible situations, in my opinion, is sharing a cubicle with a person (or persons) who works a different shift.  Man, that sucks.

Every day I would arrive to find papers strewn all around, the computer locked under someone else’s login, the stapler missing, the monitor ratcheted toward the roof like Manute Bol had been using it, toenail clippings in the keyboard, and (possibly) a placenta in the trash can.

And immediately, literally during the very first minute of the day, I’d find myself outraged and in a wanna-start-stabbin’ mood.  Yes, that’s the worst situation of them all.  Even worse than “no desk whatsoever.”

Right now I have a nice, new cubicle that I don’t have to share.  Which is cool.  Sure, I wish I had walls that went all the way to the ceiling, but it could be a whole hell of a lot worse.  And I know this, because I’ve been there.

What about you?  Tell us about your current workspace, and also your best and worst of all-time.  As always, use the comments link below.

And I’ll give you guys a full-length update tomorrow, I hope, instead of another of these pocket posts, or whatever.