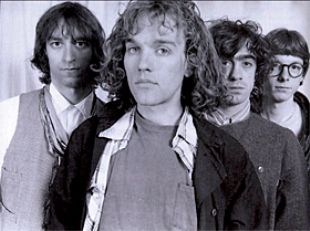 Yesterday R.E.M. announced their breakup, and it made me feel a bit sad.  Not overly sad, mind you, just somewhat so.  They were a great band who made great albums and put on great shows.  And during the years before they moved to Warner Bros. Records and became international superstars, they were also among the coolest motherfuckers on the planet.

I’m not going to attempt to write a long-winded and sappy tribute to the group, that kind of thing can be found by the dozens with a quick Google search.  But, if you’ll indulge me a few short paragraphs, I’d be much obliged…

If you weren’t around and musically-engaged during the years when they were building toward Biggest Band in the World status, you might not understand what all the fuss is about.  There was an electricity surrounding R.E.M. that’s rare.  They were never just another band, not even at the very beginning.

There was mystery and a bit of artiness, yet they also rocked and seemed like regular guys you could have a beer with.  Even Stipe, who became a bit of a wank later on…  In the early days they all just seemed like record store nerds with impeccable taste and talent.  Their early albums, recorded for IRS, still sound fantastic today.  I was listening to Reckoning while driving to work yesterday, and it’s loaded with some kind of strange, impossible-to-describe magic.  It’s always been one of my favorites.

So, those guys were mighty important to me and my friends, and I’ve remained a fan.  I own everything they’ve released, even the mediocre (or sub-mediocre) stuff following Bill Berry’s departure from the band.  But they rebounded with a couple of good albums at the end, so they exited on a high note, I think.

During the Warner years they released two great albums:  Automatic for the People, and the underrated New Adventures in Hi-Fi.  And the final two were near-great, as well.  The rest?  Not so much.  But, for the most part, they remained interesting.  It makes me a bit sad they won’t be around anymore.  Oh well.

Now, a few stories, and memories…

The first time I saw R.E.M. play live was apparently December 8, 1985.  You can see the set list here, if you can believe it.  I can’t remember if they played ZZ Top’s “Tush,” and it seems like something that might stick with me.

Anyway, I’d just recently moved away from Dunbar, and was living with a redneck I barely knew, in Greensboro, NC.  I was depressed and missing my girlfriend.  It was not a pretty picture…  But when I heard R.E.M. would be playing nearby, I snapped up a ticket.  I loved alternative/punk/college music, and never had an opportunity to see those kinds of bands play live — because I lived in West Virginia.  I was excited to finally check out somebody other than Foreigner or REO Speedwagon.

The show was in a high school auditorium in Winston-Salem, and the ticket was printed on construction paper.  The Minutemen were the openers, and the audience was only mildly interested.

I remember having a great time (even though I was alone), and being surprised at how rocking R.E.M were live.  All the songs were sped up and punky and loud…  I also recall Michael Stipe acting like a complete freak.  He wrapped himself around the microphone stand, and made all sorts of strange contortions.  Little did I know he’d only get weirder during the coming years.

Those are my main memories.

And just a few days later, D. Boone, one of the leaders of the Minutemen, was killed in a car crash.  I saw one of their final shows, literally.  If you’re unfamiliar with that band, there’s a really good documentary on Netflix Streaming, called We Jam Econo.  I recommend it.

When I worked for Warner Bros., back in the day, I was somehow invited to a surreal picnic at the Atlanta Botanical Gardens.  It was in honor of R.E.M., and all four of them were there.

Stipe showed up with his mother, and I remember Mike Mills passing a football with some unknown kid in a grassy area.  It was a very casual affair, with great food and a shitload of flowers around.  R.E.M. was just hanging out there, talking with folks.

I had them sign an 8×10, which is now hanging on the wall beside me.  Stipe drew a peace sign and wrote, in all caps, MICHAEL above it.  Bill Berry was really nice, and the other two were somewhat snotty, if I recall correctly.

Billy Bragg was also there, and I talked with him for a few minutes.  Atlanta was gearing up for the ’96 Olympics, and Billy was shitting all over it.  He told me the Olympics are inherently evil, and suck cities dry.  Great old architecture is routinely razed, and replaced with horrible modern facilities, he said.  Therefore, we should be mourning Atlanta’s selection as a host city, and not excited by it.

Here’s a picture of me and a few of my co-workers, posed with the members of R.E.M. at that bizarre garden party, or whatever it was.  I’m kneeling near the front, in a black shirt and big ol’ Buggles glasses.  Michael Stipe’s mother is not in the photo, and neither is Billy “Sunshine” Bragg.  It’s too bad.

During those Atlanta days I also attended an advance “listening party” for the Automatic for the People album, in Athens.  It was held at the 40 Watt Club, and was catered by Weaver D’s, a legendary local soul food restaurant.  The owner inspired the title of the album, because he always said, “It’s automatic,” for some reason.

I remember him handing me a plate of unbelievable pork chops and collard greens, and so forth.  I thanked him, and he said, “It’s automatic.”  Apparently that was his thing.

The band didn’t show at this shindig, unfortunately.  But the album sounded amazing, and it turned out to be one of their best.  It was a fun evening, the kind of perk I never took for granted.  Man, the Atlanta years were a blast…  Low-paid, but always fun.

A less positive story is one an ex-girlfriend told me.

There was a guy in Greensboro who loved music, but was confined to a wheelchair by cerebral palsy.  We all knew him, because he was always at shows, hanging out in record stores, and engaging in all things music-related.  R.E.M. was his favorite band.

My ex took him to see them play live, in Raleigh (I think), and somehow scored backstage passes.  While they were there, she asked all four band members to sign a poster for him.  All were very nice about it, until she got to Peter Buck.  She said he looked over at the wheelchair, and the gnarled kid sitting in it, turned back to her and said, “What’s its name?”

And why am I laughing?  That’s horrible.  Anyway…

There are other stories, but I’m starting to lose interest.  I saw them with 10,000 Maniacs a few times on the same tour (fanboy), including a show in Charleston, WV.  And I ran into Peter Buck at a Robyn Hitchcock show once.  He wasn’t friendly.  Also, I remember reading an article about them in Creem, during the early years.  It said Stipe and the reporter were walking through a rock club, and someone yelled, “Michael!  I love everything you do!!”  And Michael Stipe turned to the guy and said, “I shit, you know.”  Heh.

But I’m calling it a day.  I hope this hipster trip down memory lane wasn’t too painful for you guys.