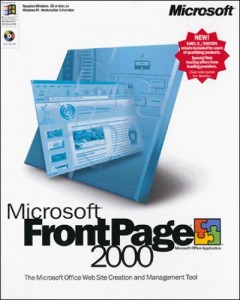 Longtime readers know of my deep, deep dissatisfaction with the Surf Report delivery system.  I’ve been using, since day one, a program called Microsoft FrontPage, which wasn’t very good in the beginning and is almost hilarious at this point.  You know, in a tragicomedy kind of way.

All updates had to originate from a specific computer, which meant the site went dark whenever I was out of town, experienced problems with my PC, or had interlopers piled-up like cordwood near the machine.  It was a very limiting situation.

Also, each individual page had to be created by hand, and it took at least ninety minutes per day just to get the site ready for the next update.  Ninety minutes before I could even think about writing something.

The RSS feed never really worked (I was using a quarter-assed “solution”), we were at Haloscan’s unstable mercy when it came to comments, and the whole thing was just kinda stoopid and outdated.

Yeah, I know, there’s some charm in that…  But it was like an antique chair that seems kinda cool from across the room, but wasn’t really designed to accommodate a big 2008 American ass.  If you know what I mean.

So, I’ve been toying with the idea of moving everything over to WordPress.  It’s one of the reasons I started the Suggestaholic site, so I could get used to the program before taking The Big Leap.  That, and it’s a place where I can write about music whenever I want…

I did some snooping around, and found a designer in Philadelphia who does great work, but doesn’t charge an outrageous amount of money.  And together we attempted to build a custom theme that tries to retain some of the old site’s feel.

I could’ve just downloaded a free template, like I did with Suggestaholic, or purchased a so-called premium theme.  But I wanted the Surf Report to be unique and not look exactly like a thousand (or even a hundred) other sites.

It took a couple of months of back-and-forth, and the theme is now ready to go.  So I had a decision to make…  I considered running the new WordPress site parallel to FrontPage, until I figured out what in the everlovin’ crap I was doing.  And that seemed like a prudent course of action.

But I know how I am, and would’ve never felt ready.  Heck, if it wasn’t for Toney we’d still be childless and living in an apartment somewhere.  My instincts tell me to be absolutely prepared before taking any Big Steps, and that often leads to inaction.  Having kids and/or buying a house?  Man, that’ll require at least a ten-year preparation period…

So screw it.  I’m starting August off on an almost-ready WordPress theme.  It’s still very much a work on process (WIP), but I think it has good bones.  And as I figure out what I’m doing, everything will start coming into focus.

Kevin, the designer, did a great job, and I’m absolutely happy with his efforts.  But I’m a very picky pain-in-the-ass (just ask him!), and am still not all-the-way satisfied with the aesthetics, especially as it pertains to the two sidebars and the footer.  The fundamentals are solid, but a little tweaking is in order.

But it’ll soon be better than the old situation, much better.  Trust me.

Today I’m just going to let you guys give me your opinions, complaints, and doomsday prophecies.  The comments are set so your first post will go into a moderation queue, but once you have one comment approved, it’ll be like old times.

Toney has agreed to moderate comments while I’m at work this evening, at least until she goes to bed…  So, let’s hear it.  Tell me how I’ve messed up a good thing.

As mentioned, the RSS feed will now work(!), so subscribe to that bitch.  If you use Google Reader, or whatever, the updates will drop right in there – like it’s 2003!!

Next time I’ll post a real update, and we’ll get back to the whining, the ranting, and the cruel mockery.

I thank you for your continued support.