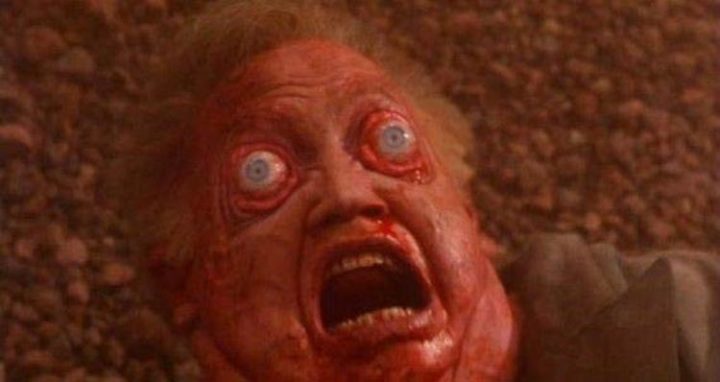 You know how when you’re driving, and some quarterwit is coming at you in the opposite direction with their brights on? Or their high-beams, or whatever you want to call them? For some reason I can’t stop myself from staring straight into it for a couple of seconds. Eventually I break the spell, and look away. But there’s always this weird inclination to go all-in on the impossible brightness. And I’m afraid that’s what might happen today, if I waddle outside my job during the solar eclipse. I could end up like the guy above, because I seemingly have no control over my own actions.

We’re only scheduled for a 72% eclipse, here in the Upper Emphysema Belt. Nancy and her passel of see-through children are traveling to one of the “totality” locations. I guess they’re all super-excited. Sounds about right… I remember when I was a kid Skylab was supposed to fly over, and all the nerds-of-the-day were similarly rock-hard about it. I was walking down the alley behind our house back then, and saw a kid lying on the roof of his garage, looking straight up through binoculars. I asked him what he was doing, and he said, “Watching for Skylab.” And I said, “Is the extra nine feet really going to make a difference? Why not just look from the ground?” He told me to leave him alone, and I continued with my day.

Of course, as we all now know, the eclipse is racist because the totality locations are either in areas where mostly white people live, or where there was a lot of slave activity back in the day. Here’s a short excerpt from the long essay:

Moving east, the eclipse will pass part of St. Louis, whose overall population is nearly half black. But the black residents are concentrated in the northern half of the metropolitan area, and the total eclipse crosses only the southern half.

I hope you’re sitting down, but the article was written by a college professor.

Also, here’s a piece about how the eclipse is favoring areas that voted for Trump during the last election. We’re very near the end of civilization, my friends. These are not articles on fringe blogs, they’re from The Atlantic and The Boston Globe. They’re politicizing a solar eclipse! Hey, if they can do it with a sandwich, they can do it with anything. Right?

Please bring us up to date on your personal eclipse experience. Do you remember any of the previous ones? Or the Skylab hubbub? What else has caused the nerds to get whipped into a high frenzy? Also, do you feel bad that the Man in the Moon is apparently a Klansman? I had no idea until yesterday afternoon. I’m a little shaken, to tell you the truth.

Also, you might have noticed I was hedging my bets when I was writing about somebody leaving their bright lights on in the first paragraph above. I’m always concerned I’m going to use a regional phrase that most people won’t understand. Is “high beams” regional? It feels like it might be, but how would I know? When you grew up in a region, it’s just normal. Personally, I just always called ’em “brights.” Is that regional?

When I was in Georgia I used to hear people refer to the accelerator in a car as a “foot feed.” That sounds spectacularly hick to me, and I’m glad I didn’t grow up with it and use it when I lived in Los Angeles. Heh. You’d instantly become Gomer Pyle.

What phrases have you spoken that turned out to be regional, and you had no idea? It’s happened to me a lot, and I try to avoid it. But it still happens, from time to time. Do you have anything on this? How about “call off?” That’s what you do when you’re not going to make it to work, right? But I hear all manner of variations: “call in,” “call out,” etc.

And I need to CALL it a day, my friends.