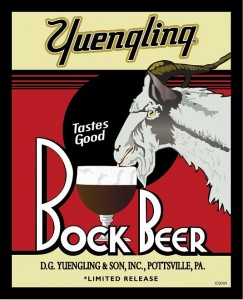 Scranton’s world famous St. Patrick’s Day Parade happened over the weekend and, once again, I wasn’t there.  It’s a big deal in these parts, and draws incredible crowds.  But I don’t have much of an interest.

I did check it out a few years ago, just so I could say I’d been to one, and it seemed like roughly fifty percent of the attendees were drunk.  And that’s even higher than at Harbor Freight Tools.  The bars open at 7 am on “parade day,” and it’s reportedly a tradition for some to be there cheering while the doors are being unlocked.

It’s crazy.  I can’t imagine starting to drink beer at 7 in the morning.  I can understand still being up from the night before, swinging for the fences and blooping lagers, but not kicking things off during the bacon and eggs portion of the day.  I think that borders on taking it too far.

When we attended our one parade here we were surrounded by jackasses wearing novelty headgear, hollering and blasting their beer breath against the sides of our faces.  Some people were shirtless with their torsos painted green, and it was impossible to tell if they were men or women, young or old.  And huge roars would go up as unknown members of the city council rolled past in pantsuits at 3 mph.

This is how old I am:  The only way I could truly enjoy such an event is if it started around 4 in the afternoon, the weather was perfect, we had a reliable babysitter in place, and access to a dedicated car service.  Even then, I’d probably be ready to go home after an hour, and slip into my cheeseburger sleeping pants.

It’s a sad state of affairs.

Speaking of beer, Toney and I went to Cooper’s on Friday evening, while the boys were off playing golf with ghost children at R.L. Stine High School.  The place was slam-packed, and we had to sit at the bar with our shoulders in front of us, if you know what I mean.

I perused their snooty list of drafts, and decided I’d better go with something Irish, since it’s the season for such things.  And after some hemming (I rarely haw) I decided on O’Hara’s Red.  Yeah, it was OK, I guess.  And my second pint was the new Yuengling Bock, which was also OK, I guess.

My selections were mildly disappointing this time (I plan to give the Bock a second chance), but I love the back bar at Cooper’s.  It’s a beer lover’s paradise, hidden away in a darkened alcove.

I wish I was there, right now.

Yesterday members of the mailing list were notified of a very important research project we’ve taken-on, here at Surf Report Labs.  And now I believe it’s safe to let the rest of the world in on it.  Click here to view the Woodstock Death Count!  And please use this knowledge for good, not evil.

Also, in a couple of weeks (or so), I’m going to have a special announcement to make, concerning a new joint venture between Metten and myself.  We’ve still got a few bugs to work out of it (many bugs), but I think we’ll be ready to go by the first part of April.  So, stay tuned.  It’s gonna be fun.

And finally, I’ll leave you with a couple of questionable Questions, to close out the category.

First, I’d like to know about your eBay experiences.  I have thousands and thousands of CDs boxed-up in our basement, amassed during the record weasel years, and I’m toying with the idea of trying to get rid of them through eBay.  Therefore, I’ve been mildly fixated on the site, over the past couple of days.

And I was wondering, have you ever bought something extra-cool there?  Have you sold an item, and made an inordinate amount of money from it?  Have you ever been burned?  What are your biggest eBay successes, and failures?

I can offer two stories, myself…

When we lived in California I often visited a used record store called Second Spin.  They always had a massive bin, filled with 99 cent CDs.  Predictably, almost all of it was discouraging crapola.  But I’d found just enough good stuff there to make it mandatory that I check the section during every visit.

One afternoon I discovered a copy of a CD by a Texas band called The Reivers.  It was their third album, the excellent End of the Day.  I already owned it (I love the Reivers), but knew their stuff was rare and out of print.  So, I snagged it.

When I got home I put the disc in a clean jewel box, and tossed the cracked and sticker-laden case that had come with it.  Then I listed the CD at eBay, stating accurately that it was in “like new condition.”

Yeah, and the winning bid was $72, plus three bucks for shipping.  I’d paid 99 cents!  It’s my biggest eBay success, to date.  I’ve tried to top it, but have never even come close.

And just so you know, the Reivers albums have since been reissued on CD, and are no longer rare.  But back in the day, they were almost impossible to find — and I had all four.  It had taken me many years to complete the set, and almost immediately they were re-released for $9.99 each.  And so it goes…

Also, at eBay I bought an incredibly cool panoramic photograph of my hometown of Dunbar, WV, taken on September 23, 1924.  It’s huge, more than three feet wide, and is crystal clear.  I can even see my aunt’s house, and found out it used to have a wraparound porch.  Who knew?

I think I paid less than fifty dollars for the thing, and it’s now framed and hanging in our family room.  It’s definitely one of my greatest eBay successes.

Do you have any interesting stories to tell on the subject?  Use the comments section below.

And what do you think about my plan to liquidate the mountain of old CDs in the basement?  A bigger hassle than it’s worth?  Most of it’s straight-up garbage, and probably wouldn’t even sell.  But who knows?  There might be some hidden jewels in there somewhere.  One man’s Deee-Lite, is another man’s treasure.

Also, if you have any St. Patrick’s Day debauchery tales to tell, we’d like to hear those as well.  I got nothin’, I’m afraid.  But what about you?  Have you ever gotten bed-shittin’ drunk in honor of an ancient religious leader?  Tell us about it, won’t you?