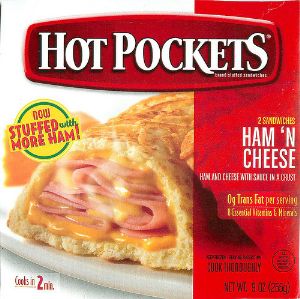 As you guys know, I don’t like to complain.  Indeed, I’ve built this site on a foundation of positive thought and inspirational tales of common folks overcoming emotional obstacles.  And I have a very busy public speaking schedule, where I deliver an inspirational message to upper management folks at Fortune 500 companies, entitled ‘You Can Do It!’

However, I need to get something off my chest, so to speak.

I nearly blinded myself on Sunday night.  Yes, that’s correct, it was touch and go for a few seconds…  I was at work, you see, eating a Hot Pocket on my lunch break.  And the son of a bitch was hotter than a 9/11 girder.  Since I only get 30 minutes for lunch, I didn’t have time to allow nature to bring the temperature down.  So, I was forced to improvise.

I grabbed a plastic fork from the plastic fork bin, and began cutting that bastard up into bite-sized chunks.  I believed that was the best course of action…  It would cool faster if I segmented it, and I could also blow on each individual piece before eating.  I was confident I’d be able to consume that hot-ass thing within the allotted amount of time, without destroying my tongue, lips, and the roof of my mouth.

But tragedy struck.  While I was cutting near the middle of the molten pouch, the fork exploded.  It shattered into about five pieces, and a large amount of the filling (ham & cheese) was launched toward my right eye.

With the dexterity of a ninja, though, I managed to lean back and avoid having to wear a pirate’s eye patch for the rest of my life.  Even though that would be kind of cool…  And the airborne glop hit me on the right shoulder: a huge super-hot load of orange.

Everyone in the break room looked up when they heard the fork snap, and saw me sitting there with a frightened/surprised expression and Hot Pocket filling on my shirt.  And they all busted out laughing at the exact same time.  One guy actually fell out of his chair.

“Fuck!” I hollered.  And began pawing at the mess with a pile of napkins.  (More laughter.)  It was burning through two layers of shirt, and it felt like my tit was sizzling.  But I got it off before a skin graft would be necessary…

However, I now had a huge oily circle on the front of my shirt — with five hours left to work.  I also smelled like Hot Pockets, which isn’t the worst thing in the world.  But who wants to walk around smelling like food, with a giant stain on their shirt?  I mean, seriously.

The whole episode was highly unsatisfactory.  And every time someone saw that wheel of disgrace, for the rest of the evening, they started laughing all over again.  Grrr…

Today I’m just taking a sandwich.  Screw it.  I don’t think I’ll need to wear protective goggles around shaved turkey, and a piece of lettuce.  But I’ll keep you updated.

I have a few other items that probably won’t fit into my ‘You Can Do It!’ seminar format.  But I don’t want to overdo things.  Tomorrow I’ll tell you about a fetus with lipstick ordering a hoagie, and how I had to clip our dog’s ass hair because dingles were forming.