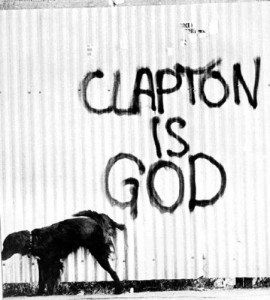 A couple nights ago I took a Tupperware-style bowl of clam chowder to work with me, and popped it into the microwave on my lunch break.  And after the buzzer went off (two minutes, thirty seconds later) I opened the door, and the bowl was on its side in a sea of uncontained soup.

How is such a thing possible?  What are the logistics?  I’d removed the lid, and laid a paper towel across the top to cut down on splatter (ha!).  And the shit went sideways on me.  I had successfully completed the same mission many times before, but this time experienced a pronounced failure.

So, instead of enjoying a piping-hot bowl of chowder, I got to spend a big hunk of my lunch break cleaning a communal microwave.  Good fun.

But seriously, how do you think it happened?  What’s the science on something like that?  Large, violent bubbles exploding inside a cold, thick paste?  Would that upend a three-pound bunker-buster of Progresso?  Help me out, won’t you?

Because I can’t have that.

Doesn’t daylight saving time end (start?) this weekend?  What exactly is the point?  It seems like it has something to do with farmers, or livestock, or grain, or whatever.  I don’t know, and don’t care enough to find out.

Oh, it’s not as big an irritant as, you know, people saying “myun” instead of “mine,” but I’ve never much cared for daylight saving time.  It seems rather cavalier to go monkeying around with the clock, all willy nilly, don’t you think?  It’s fairly arrogant, when you stop to think about it.

Plus, it’s confusing.  Fall forward, spring back?  Spring up, fall in?  Spring first, fall later?  Spring backward, don’t get any on ya?  Yeah, that catchy little phrase doesn’t help me at all.

Any opinions on this most curious of rituals?

And have you ever improvised a bit of comedy that went over like a cauliflower fart at Easter mass?  I’m not talking about a joke that nobody laughed at, but one that actually pissed people off and changed the entire atmosphere of a room.

Of course I wouldn’t have brought this up, if I wasn’t leading up to something…

When I was in Atlanta, you see, Eric Clapton released the song “Tears In Heaven,” supposedly written after his son fell out of a window (or something) and died.  It was a huge hit, and everyone knew the sad back story.

Well, I shared an office with two other guys, and one day there were several other folks in there as well.  Tom Petty’s “Learning to Fly” came on the radio.  And without hesitating, I said, “Hey, isn’t that the song about Eric Clapton’s kid?!”  Learning to fly.

Immediately I realized I’d miscalculated, and saw that I was without allies.  Most of them stared at their shoes, one guy looked at me like he simply couldn’t believe it, and another was openly hostile.  “That’s a hell of a thing to make a joke about,” he blurted, as everyone slid away shaking their heads in disgust.

Turns out the guy who was angry, a semi-bigshot, was a HUGE Clapton fan, and had named his first son Eric.

Sheesh.  People really need to get the Big Stick of Righteousness out of their asses.  If you can’t joke about tragic infant death, what can you joke about?  It’s political correctness gone mad!

And I hate to admit this, but I was just conned at Wendy’s.  I consider myself to be a professional, needless to say, but the cashier got one over on me.

After ordering my usual #1 with cheese, no pickles, and a Coke, she said, “Medium or large?”

This threw me, because they usually ask the more general question, “What size?”  And I always say small, because a small at Wendy’s is still pretty large.  But since she didn’t offer small as an option, I froze-up and went with medium.

And this caused the price to shoot up by a buck, thus breaking the five dollar rule.  And I was given an order of fries so large I needed one of those warehouse-worker lifting belts.  The Coke was also a two-hander, and cast me in deep shadow throughout the meal.  It was far too much of a good thing.

Never again!  I will not be manipulated into super-sizing, by any more black magic fast food cashier parlor tricks.  And you can make a note of it.

I hope you’re all pretending to have a Kraft caramel sealed to the roof of your mouth today.  I know I am.

And yesterday’s comments, about bad hotel rooms, were flat-out hilarious.  A fantastic collection of stories…  I read most of them last night, after I got home from work, and was wiping away tears of laughter.  Extra-good stuff.  Thanks, as always.

I’m struggling today, and feel like climbing back atop the platform.  So I’m going to stop right here.

Have a great weekend, boys and girls.  I still owe the Surf Report VIPs a super-secret update, and I’ll try to get it done in the coming days.  Maybe Sunday?  No promises, but that’ll be the goal.

See ya later.  The couch and happy hour at the Piss Biscuit Bar & Grill are calling my name…