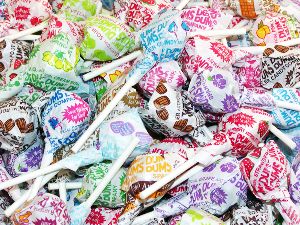 Ever notice that banks like to get the young ‘uns all addicted to Dum Dum suckers? Kids are like Pavlov’s dogs. If they get the treat one time, they will never forget it and expect it at every bank. Some banks don’t give them out. Sometimes, perhaps, they’re just out of stock.

When I was younger, the banks AND the liquor stores gave the suckers out. I guess someone decided it wasn’t really a good thing to make children want to come to the liquor store and the freebies disappeared.

I buy the ginormous bag at the store to keep at home in case someone has a sucker melt-down. At Buddy’s age, he’s cool if he gets one or not. Sissy, on the other hand, has a real feeling of entitlement to those “free” suckers.

The good news for her is that she likes them all. Even the much maligned root beer and coconut flavors. Blecch.

She will happily reach into the bowl we have at home and just take one off the top. I like to eyeball the situation quickly and determine if there is anything on top worthy of my taste buds. Unlike a lot of people I know, I do like the cream soda and the sour apples ones.

I don’t believe in rooting around in the bowl just to find a watermelon or whatever. No one wants your grubby booger hooks (Kayism) touching all the lollipops, even if they do have wrappers on them.

Recently, the Evil Twin decided he wanted to take some of the suckers to work, so I got a ziploc baggie and scooped a bunch in the bag. I didn’t inventory the selection, I just grabbed a big handful and tossed them in the bag (BTW, booger hooking is okay between a husband and wife. The Evil Twin and I have kissed – on the lips, even – I figure if it can go that far, we can be comfortable with each others’ germs.)

Anyhoodle, he picked up the bag and looked in. He said, “Yuck, all those cream soda ones are going in the trash!”

I said, “I like the cream sodas and I’m sure someone in your office does, too. I mean, they wouldn’t make them if no one liked them.” This is also my theory on cool ranch Doritos, but those things are NASTY.

He must think we’re living large, being so cavalier about tossing out perfectly good Dum Dum suckers. Have you seen how much the giganto bags cost??? I’m sure every time they sell a bag of those, some executive at the Dum Dum plant adds to their kids’ college savings.

What’s your favorite flavor? Are you the daring type who will choose the “mystery” flavor? (not me!).

I’d like to thank Jeff for the opportunity to be a guest here today. It’s quite an honor and I hope I did the WVSR some slight form of justice. He’s a tremendously hard act to follow.

Enjoy your vacation, my friend!

Evil Twin’s Wife publishes a fantastic blog under the title The Glamorous Life of a Hausfrau. She’s also (duh) the Evil Twin’s wife. Evil Twin has designed many of our t-shirts, and also the cover of my novel. Both husband and wife are about as cool as it gets, and I salute them both! Thank you ETW, for today’s update. It’s a great way to close out the week. -Jeff