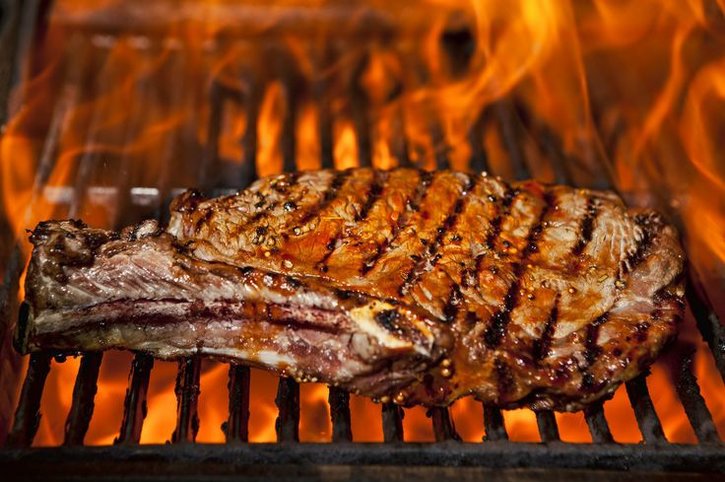 Last night I went to dinner with some people from work. We were hosting a visitor, wining and dining and yukking it up. It was at a restaurant that I consider fancy-pants – my steak was $42. You know, one of those birthday/ anniversary/ corporate expense account kinds of joints?

And I couldn’t read the goddamn menu. I’m not kidding, it was so dark in there, I couldn’t make out anything except the main headlines: SEAFOOD, STEAKS, etc. I thought about firing up the flashlight app on my phone, but worried it might be frowned upon. It makes a loud whirring sound as it’s powering up.

So, I squinted my shit down until I was on the verge of an ocular charley horse, deciphered the New York strip information, and went with it. I have no idea what else was on the menu, I was physically and emotionally spent after zeroing in on those six or seven words.

Then I got a little snooty judgment about the way I ordered it: medium-well. I know it’s not highbrow, but it’s the way I like it. I prefer it a little pink in the middle, but definitely cooked. I don’t need the comments, thank you very much. If you want to go to town on a load of bloody meat, like a coyote feasting on a decomposing quarter horse, that’s your business. But leave me out of it.

My role during dinner: color commentary. I didn’t instigate any conversations, or go off on any lengthy jags, I just injected occasional “witty” comments and anecdotes, and quickly got out. Guerilla style. When they brought out the dessert menu, for instance, I said, “Oh, I see they have dessert beverages. Wonder if I can get a frosty can of cheesecake?” Crickets. Nothing but crickets. But I stand by it… it’s good stuff.

During a previous life I made myself miserable in those kinds of situations. Because I’m awkward and weird, and strangers often don’t know when I’m kidding around. So, I’d stress and try to pretend to be a normal human being. I’d eat crap I didn’t want to eat, laugh at shit that wasn’t even in the neighborhood of funny, and try my hand at conventional shoptalk. But, at this late date, what does it matter? Oh, they don’t get the completely undiluted Jeff Kay, like Toney does, but it’s getting closer and closer.

Yeah, I don’t get invited to too many of those kinds of things.

For a Question I’ll pull something from DEEP inside the notebook. This might’ve been scribbled in a semi-drunken scrawl a full year ago, but it’s pretty good. I’d like to know how you think you’d die in a work-related accident.

Everybody has different jobs, and different situations. How do you believe you might perish at work? When I was at the record store in Greensboro it would probably be because of suicide, following a full-album play of any Frank Zappa album. Any of them. Horrible! And at my various office jobs, I might get my head sucked into an industrial copy machine, or something.

What do you have on this one? Use the comments link above or below… I don’t even know anymore.