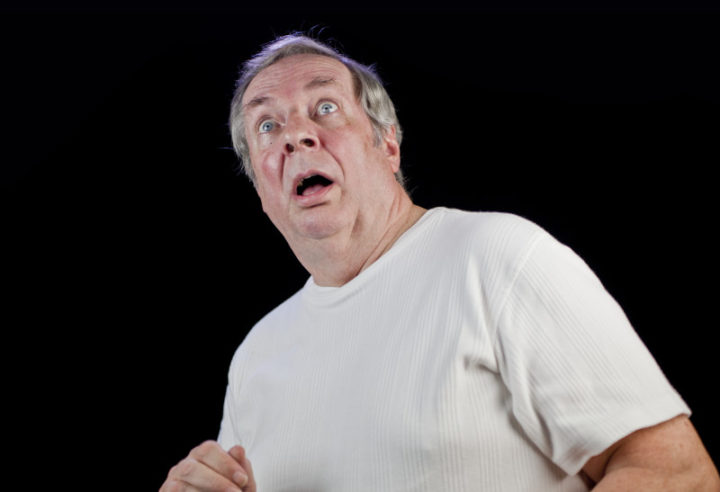 Actually, I’m at the dining room table. But who’s keeping track? Toney’s working downstairs this evening, and the bunker is off-limits for a few hours. Both hooligans are also at work, so it’s just me, Mayor McStench, and my laptop. I don’t usually write this time of day, so I’m making no promises. I’m generally a morning/early afternoon fart joke scribe, so this feels a little weird. I’m drinking coffee, to try to fool myself into believing it’s 9:45 am.

Speaking of the bunker, I almost killed myself in there this week. I had a metal folding chair in front of my computer, and the shit collapsed on me. One of the legs — the rear passenger leg, to be exact — just said fukkit underneath my great heft. Before I knew what was going on, I was piled up in the corner with my legs sticking straight up in the air. Toney heard the commotion and came running. And as soon as her brain processed the ludicrous vision before her, she started laughing and didn’t stop for a long time.

I had a hard time getting up, and I’m not kidding. I was afraid I was going to be gutted by raw metal, and the only part of me that was touching the floor was my lower back. But I eventually extracted myself from the debris, and only had a skinned right elbow at the end. And Toney was still laughing. There are few things in this world that she enjoys more than seeing me get hurt in some unusual way.

When we lived in California we had a swing on our patio, and it collapsed on me one day. I turned an S-bolt into an I. When she’s feeling down, she likes to recall that incident. Also, I sat on a child’s bed inside a Raymour & Flanigan furniture store years ago, and exploded the wood frame. The thing was splintered and fully-collapsed. Toney’s face was blood-red from laughter, and tears were streaming down her face, as we raced toward the exit before the twice-divorced mustachioed salesman could catch up to us and hold us accountable for the wrath my fat ass exacted on their merchandise.

So, anyway. I need to lose about 75 pounds. I quit drinking and immediately began putting on weight. And I was fat to begin with. I don’t get it, but whatever. Pass the pudding pops, goddammit.

Have you ever had something like that happen to you? If so, please tell us about it in the comments. I also blow the entire ass out of pants on a semi-regular basis. Sometimes it appears that a substantial amount of fabric is completely gone, after the smoke clears. It’s a real mystery. Please share your tales, if you have any.

You know what I find intriguing now? Craft root beer. Every grocery store has a section of semi-expensive designer root beers these days, and I’ve been testing them out. I’m not talking about the alcoholic swill that supposedly tastes like root beer, but actual old time soda fountain stuff. I’ve tried several, including Saranac, but none have blown me away yet. A&W is still better. But I’m getting sucked in, I can feel it. I’m on the hunt, boys and girls. If you have any tips for me, I’m all ears. And gut. 100% ears and gut.

Another thing I’m completely invested in: Homeland, on Showtime. Holy shitballs, it’s fantastic. I find myself getting excited, hours in advance, about the prospect of sitting down and watching another episode or two. Remember when TV sucked? Yeah, me too. But it sure as heck doesn’t anymore. There’s never been a better time to be alive and lazy!

A few nights ago I was driving home from work, and a guy in front of me was all the way over in the right lane. I knew that lane was ending, but he didn’t get over. I watched in amazement as he just kept driving after his lane disappeared, straight down the shoulder, at full speed. Yeah, and he didn’t make it very far before he hit a truck tire, and a big pile of metal. There’s a lot of debris alongside I-81… the remnants of other peoples’ horrible days. When he hit the tire it looked like his car went up on two wheels, and the metal was the knockout punch. When I sped past him, five seconds later, he had his flashers going and it sounded like his engine was flying apart in every direction. Dumbass.

Our younger kid had the flu about a month ago. He took the test at the doctor’s office, and was prescribed Tamiflu. So, it was official. Not that fake catch-all “flu” that people talk about all the time. It irritates me, because I’ve had the real deal, and felt like I was moving toward the light. But everybody calls the tiniest little sniffle the flu, which cheapens it. In any case, he was pretty sick for a few days, and I was convinced it was going to rampage through the family. But it didn’t. Nobody else got it. It seems unlikely, but it’s true. Whew! I’ve never been sicker than when I had that crap. And it lasted for almost two weeks. None of my clothes fit when it was over, and I almost had to go out and buy underwear suspenders. I still don’t get the flu shot, though… I’ve never had it in my life. Go figure.

I was thinking about something today, that happened when I was a kid. My friend Doug and I were cutting between two houses, instead of walking all the way around the block. And we saw a woman washing dishes at her sink wearing a tremendous bra. The thing had straps like seat belts, and the cups looked to be lined with steel crossbeams. We took off running, terrified, and I still remember it more than four decades later. I have a feeling the Army Corps of Engineers were involved in the design of that thing. Holy mackerel.

Years later, a girlfriend and I were walking home from a bar, and saw some girl (college-aged?) standing in her brightly-lit living room, ironing something while wearing nothing but a bra and underwear. I mean, it was like she was standing on a stage beneath a spotlight, and didn’t seem to have a care in the world. We didn’t stick around, but I have no doubt a crowd eventually formed. Oh, it was something worth watching. For years I became aroused whenever I smelled spray starch.

And I’ll leave you now with yet another question… Have you ever accidentally seen something of note through a window? I know this is a long shot, but it feels like I asked some other questions above. There should be something for everyone, I hope.