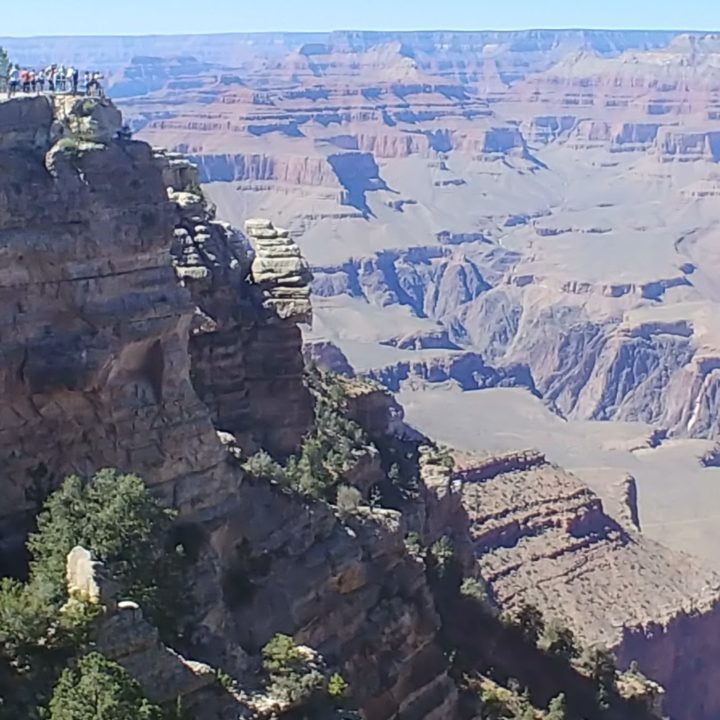 I went to dinner with a few work folks last night, and one of them mentioned The Grand Canyon, and how she’s seen it, and there’s no need to ever go back. I laughed because I think that’s the same reaction most people have. I believe Toney and I both uttered the exact same sentence, following our recent visit there. The only exception would be people who like to hike and explore, which ain’t me. Other than that… I think it falls into the “OK, mark that one off the list” category. Right?

I don’t think I posted any photos from our visit there, so there’s one at the top of this update. I took it with my phone, during a rare time that some asshole hadn’t wedged themselves between my girth and the edge of the Canyon. The rest of the photos I took that day are very similar to this one, but not as good. So… there’s no point in posting ’em.

Dinner was at one of those hibachi places, where they perform right in front of you and flick shit over your head and set off fire bombs, etc. The food was good, but I’m happy I wasn’t paying. I had a filet mignon and chicken combo dinner, and it was expensive. I had to return to work, so I didn’t drink any alcohol. But nobody else held back. The final bill was undoubtedly substantial.

There was another group sitting with us, which I don’t like. It was a giant obnoxious woman with a bellowing voice, three shockingly-behaved kidlets, and a weird jittery woman with almost no teeth on the top. The chef kept squirting some sort of liquid straight into Snaggles’ gaping maw, and this was apparently supposed to be entertaining. Shit! I didn’t even want to look at it. Big Mama kept shouting at those kids, even though they weren’t doing anything wrong, as far as I could tell. It was quite a crew. Especially for that setting. They seemed more… Wal-Mart than expense-account sushi restaurant. Oh well.

Everything was good, though. Maybe not as good as Cracker Barrel or Five Guys. But pretty good.

What do you make of this? Yesterday I received two phone calls from a number in Mississippi. I didn’t answer them, needless to say. But both times they left a message. And it was just some sober-sounding man, all business, reciting a series of numbers. When he was finished he said, “Again…” and repeated the number sequence. At the end he said, “Thank you” and ended the call. He called twice and left the exact same message.

I saved them and thought about posting the numbers here. But I’m afraid it might activate a sleeper cell somewhere and touch off a series of international events, or somesuch. I mean, what the hell? It reminded me of these creepy-ass shortwave radio recordings. Some of them were used in a Wilco album, and for whatever reason… they scare me a little. Heh.

Any idea what the Mississippi calls might be about? It’s weird shit.

I’m off today, for no other reason than I have eight more vacation days I need to burn before the end of the year. I can carry over 40 hours, so I need to take eight days off to get down to 40 hours. It’s a horrible problem to have, I’m telling you. I also took next Friday off, and the following Monday. Toney and I are planning to take the commuter bus to NYC on Friday, have lunch somewhere, walk around for a few hours, and finish with some adult beverages at Beer Authority. Then the bus driver can haul our semi-drunken asses back to Scranton. Should be fun!

And speaking of beer, Toney and I went on a tour of the Susquehanna Brewing Company last Sunday. I talk about it at length in the new podcast, but it was fun. We decided to go on a whim, and it turned out to be a blast. It’s inside a building that looks like a boring old warehouse, inside an industrial park filled with boring old warehouses. But there’s good stuff going on in there, including a surprisingly kickass bar, open to the public. We spent time with one of the owners, and it was great. We had some good beer too.

For a Question, I’d like to know how often you “unfriend” people on Facebook. And what generally causes said unfriendings? I don’t think I’ve ever done it. I’ve gone another route with it: I’ve just unfriended Facebook itself. I rarely go on there. It’s not hyperbole when I say I kinda hate it. There are exceptions, of course. But the overall Facebook experience? No, it sucks ass. But for those of you who are still engaged… how often do you cut people off? And why? Please tell us about it in the comments.

And before I call it a day, I’ll share with you a link to the new podcast episode. Right here. It’s possibly the raggediest installment to date. Man… I was a mess, and don’t know why. Here’s the summary I wrote:

Wow! This one was a struggle. I’m not sure why, but I was having trouble stringing together sentences during this thing. There’s far more mumblin’ and stumblin’ than usual. Around the halfway point I start to get into a semi-rhythm, though. You’ll get to hear one of the rejected show intros, my reaction to a man who’s trying to earn a living via farting, a report on a tour of a local microbrewery, and other assorted nonsense. There are some laughs, I think, in spite of the performance. I hope you enjoy it. Thank you, guys!

And that’s going to do it for me. I apologize for not posting on Thursday. I was having troubles here, something to do with the podcast. Technical difficulties that ate up a bunch of my time. The thing was recorded, but there were issues with the editing, etc. Anyway, it’s the first time I’ve missed a Monday or Thursday since I vowed to never miss again. I got the podcast up before midnight, so that streak is still TECHNICALLY alive. But I’m a day late with the Surf Report. Grrr…

But I’ll be back on Monday.