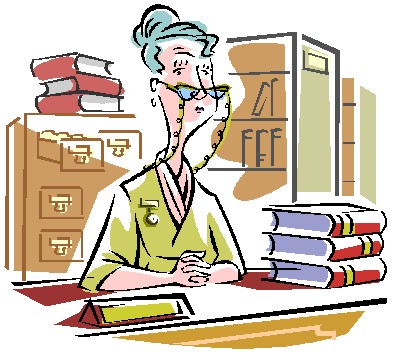 You know what else irritates me? When people say they’re going to “do” a food item. “Yes, let’s see… I think I’ll do a grilled chicken sandwich.” Do it? Why don’t you go fuck yourself?

I’m sitting in the library, trying to write, and there’s a woman over there beyond the Mystery section talking to her daughter (I believe) on her cell phone. She’s just going on and on about garlic sauce and an upcoming wedding reception. It’s been at least ten minutes so far. And all this is happening at a regular conversational volume. In a library!

And now there’s some girl behind me doing something on her phone, and it keeps making a sound like water dripping. Know what I mean? I’m fixin’ to have a stroke.

When I was a kid old ladies would come running at you if you made any sound at all in a library. Now it’s just game-on. You could probably bring a boom box up in this bitch, and start blasting the Jesus and Mary Chain.

I’m here because Toney and I are kinda-sorta arguing. We’ve been together for so long we don’t really argue full-on anymore. I mean, who has the energy? But these were the final words spoken, before I left the house and came over to this loud-ass place:

Me: That’s crazy.
Her: What’s crazy?
Me: What you just said.
Her: No it isn’t. There’s nothing crazy about it.
Me: It’s insanity. …I’m going to the library.

So, there you go. It’s about as heated as it gets between us these days. With the kids it’s a different story. That’s sometimes a whole other level of exasperation. With them there’s sometimes shouting.

Occasionally I just feel like selling the house, quitting my job, and buying an old Winnebago. Then Toney and I could hit the road, and drift from town to town. Maybe pick up a fast food or grocery store gig here and there for gas money, and move on. Just go Dr. Richard Kimble on this deal. I’m tired, my friends. Emotionally tired.

Oh great! Now there’s an old guy in here who looks like a 5 foot 6 prawn, asking about how the microfiche machine works. What’s the story with old men and ancient newspapers?? They fucking love ‘em. In a few minutes he’ll have that piece of 1965 technology fired up and running wide-open. There will be a loud fan, and continuous whirring until the place closes at 5.

I’ve been trying to write a novel, but it isn’t going anywhere. I’m a mess. I’ve seriously considered going to counseling of some sort. I think my insurance will pay for six visits, or somesuch. Have you ever done that? I haven’t. I’ve also never had a massage; I’m fat and would likely fart when prodded. But I’m getting off the subject…

I’m thinking about going back to a project I started years ago with a literary agent. She guided me through the process, and at the end… I’m not sure it even sounded like me. All the Surf Reportiness was cooked out of it, and it wasn’t very funny. It was technically well-written, but there wasn’t enough fun. I blame myself, of course, ‘cause that’s the way I’m wired. I should be able to perform under any circumstances.

In any case, I’m thinking about going back and tackling that thing in the standard style. I’ll just self-publish it, and it’ll at least be a good time. This has me excited a bit, for the first time in a while. Today, anyway. And yesterday.

There’s somebody now loudly humming the Jeopardy! theme song. If you think I’m exaggerating this stuff, you would be mistaken.

Speaking of counseling, there was a joke in the first chapter of Crossroads Road that caused a reader to get super-pissed at me. It was something along the lines of “I’m not really a psychiatrist kind of guy. I’m from West Virginia.” That’s all it said. I thought it was funny, and still do. But this person got all offended, demanded a refund from Amazon, etc. Good times.

The microfiche machine is now roaring, and a man – possibly Korean – keeps sighing in a theatrical manner. I don’t believe the two things are related, but I’m not 100% sure. BTW, one of my favorite band names of all-time is Teasing the Korean.

I’ve recently spoken to two people who have never been on an airplane. That amazes me. Wonder if they ever had a massage? I should’ve asked them. Also, a woman told me a few days ago – in the tone of a proud hero – that she’s never been to New York City. She’s lived here all her life, about two hours away. Why?? I sincerely don’t understand.

And I’m getting out of this place. It sucks. …Holy shit, a woman just walked in with a pillow that looks like it came straight from her bed. In a library!