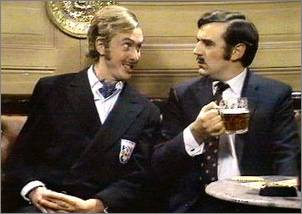 I know this might be difficult for some of you to believe, but I was in Wendy’s this afternoon.  I was sitting in a boof by a window, where I could keep an eye on my car (since my laptop was on the passenger seat), enjoying a #1 with cheese, no pickles, and a Coke.  Well, actually… I went with the sweet tea this time.  But that’s neither here nor there.

I was eating, when some guy sat down in the booth in front of mine – facing me.  The place was almost empty, it was off-hours, and the dude went with the seat that was sure to generate the maximum amount of awkwardness.  Simply excellent.

“Hi,” he said, before his ass was fully in his chair.  Great…

I gave him the “sup?” chin-lift, and continued working on my fries.  I was hoping I’d conveyed a “not really interested in chatting” vibe, without being openly rude.  But apparently I need to perfect my technique.

“Those phones are fantastic, aren’t they?” he said.  “What is that, an iPhone?”

“Oh, Droid.  Those are fantastic.”

Two fantastics already…  I gave him a weak “yep” and kept going.

“Do you know you can download an app to your iPhone there, that gives you advance warning when cops are out patrolling, watching for speeders?”

I realized the dude was eating two giant Frostys: one vanilla, one chocolate.  And nothing else.

He continued.  “It costs $99, but if it saves you once it’s paid for itself, right?  Because a ticket is usually around $180, plus your insurance goes up.”

“It’s a fantastic service, you should check it out.  And that $99 is a one-time fee, not yearly.  And like I said… if it saves you once, it’s more than paid for itself already.”

“You can hook it into your GPS, too.  It’s designed to work with Garmin, and TomTom, and all the big names.  It’s fantastic!  And if it saves you once, it’s paid for itself.  It’s a great app that you can download straight to your iPhone there, and it costs $99.  That’s for life, remember, not yearly.  You’ll get all the updates for life.  I use it, and I think it’s fantastic.”

“Well, I’ll definitely check it out,” I lied.

“Tell all your friends about it!” he shouted, with Frosty all over his teeth.

“I will,” I said, while climbing to my feet – with at least seven full-sized fries remaining.  They would have to be sacrificed, there was no other way.  “See you later.”

I went outside, and got in my car.  And as I was backing out of the parking spot, I noticed the Honda beside me had the URL for the app’s website stenciled on the back window.

Good god.  I assume the guy has some sort of stake in the business, right?  That’s pretty obvious.  But a few minutes later I came up with a preferable scenario.  Maybe he just REALLY loves the app?  Heh.  That’s what I choose to believe.

It reminds me of a man who used to drive around town in a car emblazoned with a gigantic GEICO logo – it covered the entire vehicle.  One day I saw him in a parking lot, and said, “So, do you work for GEICO, or just really like their service?”  Luckily, he busted out laughing.

Anyway… I don’t mind chitchatting with people, as long as they’re not an annoying brand of crazy – or working some angle.  You know, like a religious nut, or someone with a political axe to grind.  This dude clearly had an agenda.  And is that really his business model?  Bugging strangers in fast food restaurants, who happen to have an “iPhone?”  I’m not sure that’s the way to go.

What are your thoughts on chitchatting with strangers?  I like talking with people in dive bars, but you’ve got to be careful.  A lot of people are mean drunks (I’m the opposite), and have a hair-trigger temper.  I like to prod folks to talk, but one time a guy turned to me and said, “Are you writing a fucking book?”  That was awkward.

So, what’s your stance on chitchat?  Can you remember any especially interesting episodes?  Please use the comments link below.