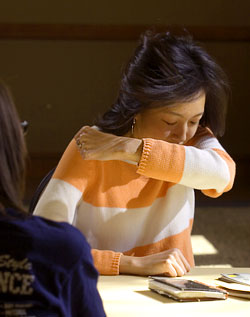 I was at work one day last week, when some kid, maybe nineteen years old, asked me the following question:  Have you ever had Kraft Macaroni and Cheese?

Just thought you’d want to know.  Maybe tonight he’ll inquire about whether or not I’ve ever taken a deep breath, or buttoned a shirt?

Can you think of any especially stupid questions you’ve been asked?  Tell us about it.

The younger Secret reportedly sneezed at school a few days ago, and I guess this practically set off an air raid siren.  He said a nurse was suddenly there.  He doesn’t know where she came from, she just appeared before he’d even had a chance to finish his choo!

“Sneeze and cough into your elbow!” she yelled at him.  Heh.  That’s the new thing, isn’t it?  We have posters at my job, showing cartoon characters sneezing into their elbows.  Where does this stuff come from?

And how long before we start seeing people walking around with a shiny patch halfway down their left arm?

Jim Carroll died over the weekend, and I hate that.  Sometimes he came across as pretentious, I thought, what with all the poetry and spoken word performances.  But he left behind three works that made me a longtime fan.

And they are, Catholic Boy (his first album), I Write Your Name (his third album — the second was a turd), and his grimy, disturbing autobiographical book, The Basketball Diaries.  The albums are very good, and the book is great.

Most people remember him for the song “People Who Died,” and that’s fine.  It’s a memorable tune.  But there was more to the man.  It reminds me of the days when people used to refer to Randy Newman as “that Short People guy.”  Wow!

Anyway, here’s a raucous version of that song, performed live on some unknown TV show.  RIP Jim, and all that stuff.

On Saturday we bought a case of Sierra Nevada Anniversary Ale.  We tried a 6-pack a few weeks back, and it was freaking fantastic.  We had to buy the case hot, and I worked on Sunday night, so it’ll probably be Saturday before we actually break into it.

But it’s chilling in our basement fridge as I type this, whispering sweet nothings through the floorboards…  Oh yeah.  Here’s a review that summarizes my thoughts, better than I ever could.  I think.

And remember how I said there’d be extra-lame weeks here at the Surf Report for a while?  Yeah, well this is one of them.  The updates will probably be abbreviated, and only run through Wednesday.  Sorry, but I’m taking my box of Little Debbies and walking into the forest in a few days…  I’m in the middle of prep period.  November 1 will be here before I know it…

I’ll leave you now with a Question I think will be kinda fun.  But there are some ground rules…  I’d like to know your favorite punch lines.  Not the whole joke, mind you, just the punch lines.

I’ll get the ball rolling with three, off the top of my head:

“Now that’s what I was waiting for, a HOT meal!”

Please resist the temptation to tell complete jokes, just give us the punch lines.  Sometimes it’s funnier without the context.  We’ll see how it goes…