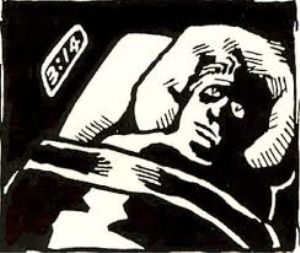 I took half-a-day of PTO at work yesterday, and came home at lunch.  The plan was to hit the sack early, and be up and at ’em by 6 AM.  My to-do list continues to grow, and I wanted to maximize my weekend.

However…  I had trouble sleeping.  I tossed and turned and thrashed.  My mind was running wide-open, and focusing on the negative.  I was worrying myself awake.

Eventually I sighed theatrically, and threw in the comforter.  I went downstairs and finished reading this book, which I highly recommend.  It’s a mainstream mystery, with a fantastic narrator.  He’s a bit of a fuck-up, a bit of a scumbag, and totally hilarious.  The unforced humor reminded me of Charles Portis, who is one of my favorite writers.

I used the book’s ending as a signal to try to sleep again, and got the same results.  I couldn’t escape the low-grade panic I was feeling, and wasn’t able to achieve unconsciousness.  I tried that trick where you relax part-by-part, starting at the toes and working upward.  But it was no good, and I returned to the living room with my Kindle.

I started reading this book, about Columbine.  And before I finished the first chapter, Toney was coming down the stairs.  “What the hell’s going on?” she said, still half-asleep.  “Why do you keep getting into bed, then getting out?”  My sleeplessness had apparently gone viral.

I ate a Jethro Bodine-sized bowl of Rice Krispies, and we talked for a while.  Then I realized I was starting to get sleepy, finally.  I looked at the clock and it was now 3:30 AM — almost the exact time I go to bed when I’m working.  Hilarious.

“Let’s go, Andy!” I said, and Black Lips and I retired for the evening.  And this time it took.

Of course Toney was now up for the day… at 3 in the morning.  And I pretty much wasted five hours of PTO, on worrying and being a fragile little Nossy-boy.

But that’s OK.  I’m going to hit the Mega Millions jackpot on Friday, and most of my troubles will be over.  Oh sure, I’ll still be fat and old, with a questionable personality.  But once we’re living care-free in our new penthouse apartment in Buckhead Atlanta… I’ll sleep just fine, thank you very much. Of course I haven’t bought any tickets… yet my odds are still roughly the same as someone who bought 100 of them. Heh.

Today I took my car in for front brakes.  A few weeks ago I got an oil-change and tire rotation, and the guy said I needed new pads and rotors ASAP.  I’ve been calling around for prices, and Pep Boys was by far the cheapest.  Most were in the neighborhood of $300 to $350, but the guys today did it for $217 – tax included.  And now it feels like a new car again.

The first price they quoted was $224 plus tax, and it turned out to be less, because the rotors weren’t as expensive as he thought.  Have you ever heard of such a thing?  Getting a customer’s OK on a price, and charging less than that number?  I haven’t.  Especially not a car repair place.

We’d been going to a garage near our house for more than ten years.  The guy who managed it was great.  He was honest and friendly, and often did minor repairs for free.  He was one of those rare mechanics you feel lucky and privileged to know.  It felt like he was on our side.

Hell, he even came out in a truck and rescued me on I-81 once, when my alternator shit the bed.  And what did he charge?  Not a thing.

But he left about a year ago, and it’s never been the same.  The new manager is friendly enough, but I don’t consider him an ally.  I think he’s just a standard squeeze-every-dollar-possible style of asshole.

Toney went in there a few months ago in a panic, and he took advantage of the situation and charged her way too much.  Of this I am convinced, and he can ram it deep and on a slant.  We will never return to his little den of rip-offs.  For ten or eleven years they got ALL of our business, and now they’re going to get none of it.

The other guy rescued folks on the interstate, and this one up-charges people in vulnerable situations.  He can go fuck himself.

But I’m liking Pep Boys, so far.  Their pricing, anyway.  The store is a little bizarre, like a throwback to a different era.  They sell fuzzy steering wheel covers, air fresheners to hang from rearview mirrors, and those folding reflector screens for the inside of your windshield on sunny days.  I didn’t see them, but they probably sell The Club, as well.  I felt like I’d passed through a time portal.

In any case, my brakes are back to normal, and I don’t feel like I got bent over a couch in the process.  I’m sure a few of you will tell me I’m mistaken, though.  And I’m always very appreciative when that happens.

Before I call it a day here, I’d like to share a few links with you guys.

The first is a post at Metafilter, by CitizenX.  She linked up several of our fast food articles, and it led to a tsunami of traffic last night and this morning.  Now a few other blogs have noticed us, and it’s a beautiful thing.  Thanks, Ms. X!  It’s much appreciated.

Also, metten has posted a lengthy article at Mockable, about the future of that website, and also some bad shit that’s happened in his life recently.  Metten is a long-time friend of the Surf Report, and I hope you’ll hop over there and read what he has to say.  He’s a good guy, and I wish him nothing but the best. If you want to help “unfuck” metten, here’s your link.

And finally, here’s something I think you guys will enjoy.  The folks over at SoGoodBlog are running a “candy madness” tournament.  It’s underway, but there’s still plenty of time to vote and participate.  You can view the brackets here.  May the best candy win!  And be sure to add SoGood to your RSS reader, or bookmark it, or whatever.  They’re good people.

For a Question of the Day, let’s go with the tried and the true:  What would you do if you won the massive Mega Millions lottery on Friday?  I’d turn in my two weeks notice (I have no axe to grind, and would work another month or more if they asked…), and move to the South.  And we’d travel.  Nothing too crazy… just a stress-free life, and global exploration.  Ahhh, yes.

But what about you?  Please tell us in the comments section below.  And I know it’s a predictable question, but that’s the way it goes sometimes.