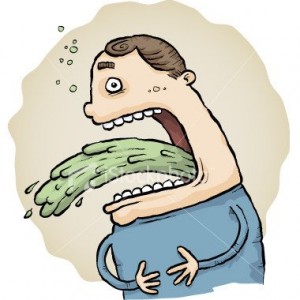 I’ve been sick.  Yesterday I sat in a chair for fourteen hours, shivering and achy, and perpetually on the cusp of vomiting and/or shitting myself.  I never crossed over, though, and that’s unfortunate.  If I’d been able to find release, I probably would have felt a little better.  Oh well.

Today I’m almost back to normal.  I’d say I’m operating at 80% of full capacity, which is a major improvement.  I’m not prepared to do a set of squat ‘n’ thrusts, or anything like that, but I’m feeling semi-OK.

I didn’t go to work last night, which is only the second time I’ve called off in three years.  If I’m expected to be there, I’m almost always there.  But I felt like I had Malaria, so funk dat.  When I called to check on them, I found out there were three of us who didn’t make it to work:  three out of ten.  So, obviously I picked up somebody’s illness spores there.

And how disgusting is that?  I bet we’re sucking up other peoples’ spores, all the time.  Most don’t make us sick, so we don’t realize it.  But I suspect there’s spit and snot smeared everywhere, and lung mist hanging in the air.  Blecch.

Thursday was a scheduled day off, and I had a long list of things I wanted to accomplish.  I got out of bed all fired-up and ready to jump into it with both feet.  And by the time I reached the coffee maker in the kitchen, I’d already said fukkit.

The main task on the docket was roughly the last thing I wanted to do, so I didn’t do it.  Probably not a great habit to get started…

I spent the day doing chores, though.  It’s not like I just hung around the house power-farting into upholstery.  I was out and about for most of the day, and it felt good to be in the real world again.  I should’ve been at the library, but I was craving the real world.

And within thirty minutes I hemorrhaged almost $140:

Or roughly the price of a new Kindle, which I still don’t own.  Grrr…

I fork over about $60 per week for gas, and only drive back and forth to work.  So, my commute must cost ten dollars per day.  Holy crap!  That’s $3000 per year.  It’s the kind of thing I wish I didn’t know.  Three thousand dollars for the pleasure of driving back and forth to work?  That’s goddamned depressing.

When I worked at Fas-Chek grocery in Dunbar, I made $3.35 per hour.  So I’d have to work almost 900 Fas-Chek hours (more than 22 full weeks), just to cover my current commuting bill.  Damn.  I should probably just put down my calculator, shouldn’t I?  Whenever I start busting out the Fas-Chek hours, nothing good ever comes from it.

What was your first job?  Fas-Chek was my second real job (after toll collector at the Dunbar Toll Bridge — $4.60 per hour), so I’m cheating a little.  But I’d like to know about your FIRST real job.  Not a paper route, or helping Old Man Watson clean his basement, or shit like that.  Your first real job at a real company, where you punched the clock, etc.

How much did you make?  Did you like it?  How long were you there?  Any good stories from that era?  What’s your most vivid memory?  Please tell us all about it in the comments section below.

And I hope to be running at 100% tomorrow.  Unless I have a relapse, I’ll see you then.