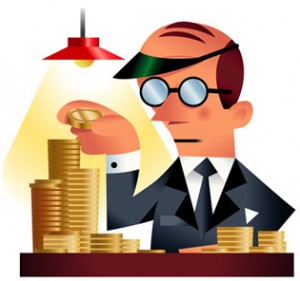 According to the Internal Revenue Service, we owe them a little over $3000 because of some error on our 2008 tax return.  We’ve been talking back and forth, but we all know how that story will end.  Yeah, with me writing a check, and gripping the pen so tightly I suffer permanent nerve damage in my action hand.

But the episode has made us a little gun-shy about using Turbo Tax.  I know that’s irrational, but we’ve got to blame somebody or something for this issue, and Turbo Tax it is.

So, we made an appointment with an accountant, and went to her office last night.  She’s going to do our taxes for last year, and will also check out our 2008 return.  Hopefully she can find something that will save us three grand, or at least confirm there was a problem.  I don’t mind paying if we really owe, but I don’t see where we screwed it up.  Maybe she can shine a little light on it for us.

While we were there, the accountant asked us a few questions, especially about the 1099 forms (is that correct?) from Amazon and Google Adsense.  They cover my meager Surf Report earnings, and she wanted to know more about it.  I answered the questions, and we left.

And Toney said I was borderline rude to the woman.  I was dumbfounded — shocked and dumbfounded.  I was rude?  How??

She said I was abrupt, and it came across as almost rude.  Not quite rude, but certainly not friendly.  Abrupt?  I replayed our brief conversation, and genuinely didn’t understand.  The woman asked her questions, and I answered them.  I think lots of people launch into long, drawn-out stories, and provide way too much unnecessary information.  I try not to do that; I like to keep it simple.

For instance, if she’d asked how long we’ve lived in our current house, another person might say, “Well, we moved from California in 2000 because of a job transfer, and we bought our house in April of that year.  It’s the longest we’ve ever been in a house, we only made it three or four years in our previous two homes, but we’ve been in this one for a long time…”

And I would say, “Eleven years.”

Is that abrupt and rude?  I don’t think so, but maybe it is.  I know I shouldn’t care, but I do.  I don’t want people to think I’m an asshole.  I just try to answer questions the way I prefer people answer my questions.  Ya know?  Just spit it out already!

A few years ago, during one of my performance reviews at work, my boss at the time said that some of the employees are “intimidated” by me.  I shouted, “What??”  How in the hell could somebody be intimidated by me?  I’m about as laid-back as they come.  I even make a point of walking around every night, and spending a little time with each of them, asking how things are going, etc.

But, one or more of them apparently reported that they’re scared of me.  It’s mind-boggling.  So, it’s possible that I’m not very self-aware.   Perhaps I’m sending out rogue vibes?  It bothers me, if you want to know the truth.  At this point in my life, I should have my vibes fully under control.

Do you have any experience with this kind of thing?  Have you ever discovered that people have a completely off-the-wall opinion about you?  Something that’s so far from the truth, it blows your mind a little?  If so, please tell us about it.

Also, if you’ve ever had any “disagreements” with the IRS, I’d like to know about that, as well.  Use the comments link below.

Do you know of any schools with questionable names?  How about team nicknames?  If so, please share.

And I’m going to call it a day, my friends.  I have to have my “book” completely finished by the end of the month, so next week might be a bit unpredictable.  But I’ll do the best I can.