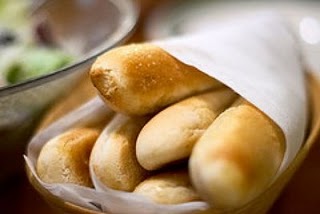 I’ve been working an outrageous number of hours, and, in addition to some heavily-taxed overtime pay, my employer gave me a fistful of gift cards to chain restaurants as a token of their appreciation.  Oh, they know how to win my loyalty.

So, a few days ago we busted out one of the cards, and went to Olive Garden.  We don’t go there very often, because the cost-to-enjoyment ratio is sometimes a bit lacking.  It’s not horrible, or anything, just kind of pricey for what you get.  In my opinion, anyway.

It was a weeknight, but the joint was hoppin’ and incredibly noisy.  We were seated at a square table in the middle of the floor, and I was so close to the booth behind me I thought the occupants might ask to sit a basket of breadsticks on my shoulder.

I ordered the “create your own” pizza, with green peppers, onions, pepperoni, and sausage.  Everybody else got complicated pastas of some sort, but I (like Barney Fife) don’t like my main dish concealed in a heavy sauce.  And, as it turned out, the pizza was pretty damn good, possibly the best thing I’ve ever eaten at Olive Garden.

But the waiter who was helping my new friends behind me, kept wedging his big Dockered ass into the small space between their table and me.  One time I wasn’t paying attention, turned my head, and almost found myself with a male butt cheek mashed against my head and neck.  And I can’t have that.

He was, quite possibly, the most attentive waiter in the history of waitering, and his outsize ass was almost continuously bobbing and weaving into my airspace.  I was afraid he might eke one out, and blow microscopic poop particles across my pie.  But I think I dodged the bullet, thank God.

I enjoyed the pizza, despite the presence of some guy’s butt, and Toney and the boys liked their meals, as well.  In fact, I took two slices home, had them the next day for a pre-lunch starter, and it was even better than the night before.  Why are some foods like that?

What are your favorite better-the-second-time foods?  Spaghetti sauce comes to mind, as well as chili.  What do you think?  What would you serve at the Second Day Café?  Help me out, won’t you?  Use the comments link below.

And speaking of overtime, do you think those trapped Chilean miners will be paid time and a half for the 69 straight days they were underground?  That works out to be 1656 hours each, give or take.  (And I’m the one complaining?)  At the very least, they should get a laminated certificate, and potluck lunch.  Right?

I was talking to a guy from a previous job a few days ago, just touching base ‘n’ catching up, and the subject turned to an ex-coworker who was fired for stealing.  Oh, this woman didn’t steal money, or the products we manufactured, or anything along those lines.  No, she would sneak entire pizzas to her car, trays of brownies, or cases of soda – from company-sponsored lunches, etc.

She was also suspected of emptying every first aid kit of the Band-Aids, if you can believe it.

Finally, she was caught red-handed and they let her go.  While I was talking to my friend, I asked if he knew what happened to her.  And he said she was working in the deli at a local grocery store.

This made me laugh, and I told him I had visions of her standing beside the meat cutter, sending slices of ham into her purse, which just happened to be wide-open and sitting nearby.  In my mind I could see her shaving a giant ball of pork into a pocketbook, her eyes nervously darting around the room.

And that leads me to the second Question:  Do you know anyone who’s been fired for stealing?

A rotund accountant embezzled $50,000 from one of my previous employers, turned himself in, and acted like a victim when they fired him on the spot.  He was the same distance in every direction, and was also making payments to some fake company that led straight to his personal bank account.  Wotta portly douche.

And when I worked at a large DVD manufacturing plant, a temp worker was caught with twelve(!) copies of Lord of the Rings in his underwear.  It was a new release at the time, possibly even prior to street date, and the company prosecuted the fool.  When they discovered the discs inside his Fruit of the Looms, he pleaded with security, “They must’ve fallen off a shelf or something!”  Heh.

What about you?  Do you have any “fired for stealing” tales to tell?  If so, now’s the perfect time.