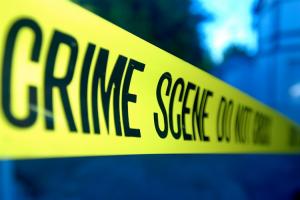 My heart almost flew apart in my chest a few minutes ago. I was coming down the stairs, after making the bed (somehow my job since 1992), and somebody started BANGING on the front door. Andy lost his shit, of course, and I was alarmed by the aggressiveness of the knocking. Was this a home invasion, or something??

Gulp. I opened the front door, while trying to block the hound with my legs. And two unsmiling cops were standing there. The floor of my ass nearly fell out.

Instantly I thought, “What have the boys done?!” Then: “Is somebody dead??” Two unsmiling cops on a front porch can flat-out stress a person’s circulatory system.

They told me they were investigating an incident that happened nearby. First question: Do you have any weapons in the house? I told them no, and they both stared at me for a beat too long. What the? They were sizing me up, trying to decide if I was lying or not.

I was also asked if I know the neighbors directly behind us. “I’ve never spoken to them,” I answered. There have been multiple families who’ve lived there through the years, and I don’t know the current people. At all.

There were other questions, like “Do you live here alone?” and that sort of thing. Eventually they softened a bit, and told me someone shot a .22 bullet through the upstairs window of a house near us, and it didn’t come from the street. They think it came from our yard, or the yard of the people who live behind us.

I have no idea. It happened last night, between 9 and 11, and everybody was home watching TV, except me. I was at work. I told them this, and they seemed to believe me. It was mildly unnerving at the beginning, though, when they acted like I was lying. I’m not a fan of the accusatory beat-too-long stare. Ya know?

I also don’t like the idea of people shooting guns all willy-nilly in our quiet little neighborhood. Or somebody using our back yard as their own personal Grassy Knoll. What the hell, man? Am I going to have to worry about Andy being assassinated, or something even worse? This is no good.

But, at least they weren’t here to deliver bad news. Eventually my heart returned to its normal rhythm, and I came down from the adrenaline spike. Sweet sainted mother of Cy Acosta!

Do you have any experience with unsmiling cops at your front door? If so, please tell us about it. Use the comments link below.

And have you ever noticed how people on shows like Law & Order always go about their normal business, while being grilled by a homicide detective? They might be painting a house, or stacking dishes in a restaurant or whatever, and never miss a beat — while being questioned about A MURDER. That’s utter bullshit. Those two guys today had my undivided attention, I’m here to tell ya. Wow!

Have yourselves a great day, my friends. I’m going back to work now.