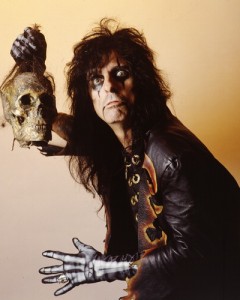 What’s the difference between partly cloudy, and partly sunny?  Is it just a glass half empty/half full deal, or something more complicated?  I mean, if it’s partly cloudy it’s also partly sunny, right?  And vice versa.

I don’t care for it, not one tiny bit.  I think we’re being manipulated.  The bastards.

On Saturday Toney and I cleaned up the yard, and apparently unearthed the Shanghai of gnat colonies.  Roughly twenty lawn bags-full of leaves and sticks were in our flower beds and piled against the house.  And as we raked, gnats-a-plenty emerged.

It sucked.  I had those things crawling up and down my neck, all over my face, and buzzing in my ears.  I also wished, momentarily, that I’d never given up on good ol’ Hanes briefs — if you get my meaning.  Far too much access to restricted areas…

But we got it fixed up, and the yard looks great.  Right this minute, anyway.  I can’t really enjoy it, because I know every second that passes is another second removed from perfection.  It starts getting worse, the moment the mower and rakes go away, and the garage door comes down.  The degradation begins immediately.

And pretty soon… I’ll be out there again, with bugs on my wiener.

In case you’re keeping score at home, Toney and I shared a six-pack of Samuel Adams Irish Red after the yard work.  If it weren’t for quality beer in the fridge, the whole outside of our house would go to seed, and Half-Shirt would be distributing a petition.  And that’s not really a joke.

On Saturday morning, before the Gnatty Jamboree, we went to Lackawanna State Park and enjoyed the sunshine.  The place was slammed with people, and it was fairly chaotic.

We took Andy (Snoop Manny Mann) with us, and he humped up like a kangaroo and ejected several large turds in front of a family picnic.  One woman lifted a forkful of macaroni salad to her mouth, saw what was going on, and put it immediately back down.  Sheesh, lady.  It’s just a little fresh-squeezed dog shit…

And yes, it was cleaned-up.  Get off our backs already.

As we continued walking a group of scummy characters passed us going in the opposite direction.  Straight-up trash.  One of the guys was all scarred-up, and looked like a meth freak.  His eyes were darting here and there, and all four of these “citizens” looked like they smelled horrible.  And probably sounded like they looked bad, as well.

One of the women was just a skeleton with poorly tattooed skin hanging off.  Each of her teeth appeared to be a slightly different color, and she was all shaky and jerky.

“Can I pet your dog?” she slurred, in a radically slowed-down voice.

Holy shit!  This was a heroin addict.  I’d bet good money on it — heroin or Oxycontin.  Oh, I’ve seen The Wire.  And she wanted to linger and pay tribute to Black Lips Houlihan.

None of us answered her (too much to take in), so she bent over – very deliberately – and started stroking Andy’s fur.  Usually he doesn’t go for such nonsense, but he stood there like a ceramic doodad and let this scary-ass creature pet him.

“What’s his name?” she asked, while bearing teeth that looked like a sample card for beige paint, from Lowe’s.

“Nancy Spungen,” I wish I’d been quick enough to answer.  But, unfortunately, I was too disgusted and uncomfortable to be witty, and told her the truth.

She said nothing to that, and walked to catch up with her high-quality friends — who hadn’t progressed very far, since they were all moving as if underwater.

I wish I could’ve seen ol’ Tater Salad’s reaction to that crew.  She probably just shoved her paper plate away, and said to hell with it.

This update is a super-quickie, typed like an email.  Hopefully it’s not obvious.

I don’t really have a Question for you, either.  So just tell us what you did over the weekend.  Anything exciting?  Use the comments to bring us up to date.

Oh, this just popped into my head…  On Saturday evening we cooked hamburgers on the grill, for the first time this season.  And Toney and I got into a discussion about burger toppings.

If you were, for some reason, restricted to just one hamburger add-on, what would it be?  We both agreed it would be onions, because you get the most bang for the buck with ’em.  Lettuce and tomatoes are too subtle, and the same goes for mayonnaise and ketchup.  Mustard might be a good choice, but I’m going with onions.

What about you?  What would be your topping of choice, if you were limited to just one?

And I need to go to work, unfortunately.