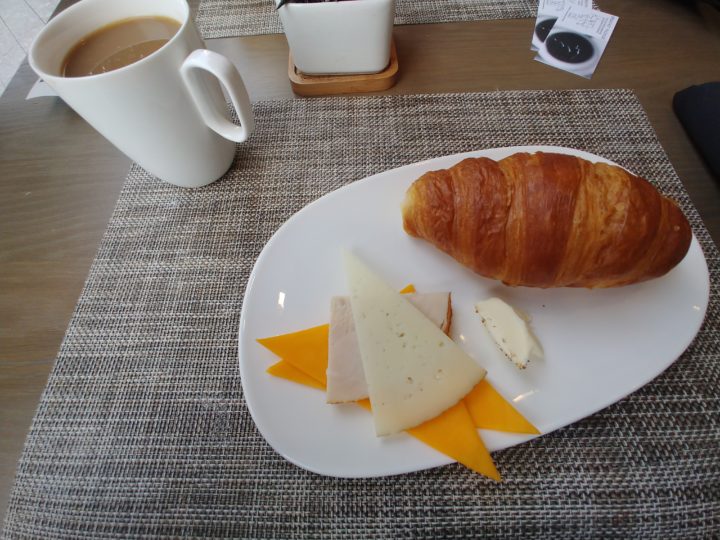 Do you consider that breakfast? At our fancy-ass hotel in Cincinnati, they do. I say, “Where go the hashbrowns? Where go the bacon strips?!” Oh well. It was “free.” And I use the term about as loosely as you possibly can. I mentioned in the podcast that I heard a trip-hop version of ‘Swingin’ Party’ by the Replacements while having one of these demoralizing aristocratic meals, and Surf Reporter Brad did some research and tracked it down for us. Check it out here. Nice work, Bradley!

Before we get into another Pulitzer-level photo display, I’d like to alert you to the second part of the Pittsburgh/Cincinnati audio travelogue here and below. Please check it out, along with the previous episode, for a complete overview of the trip. It was fun! 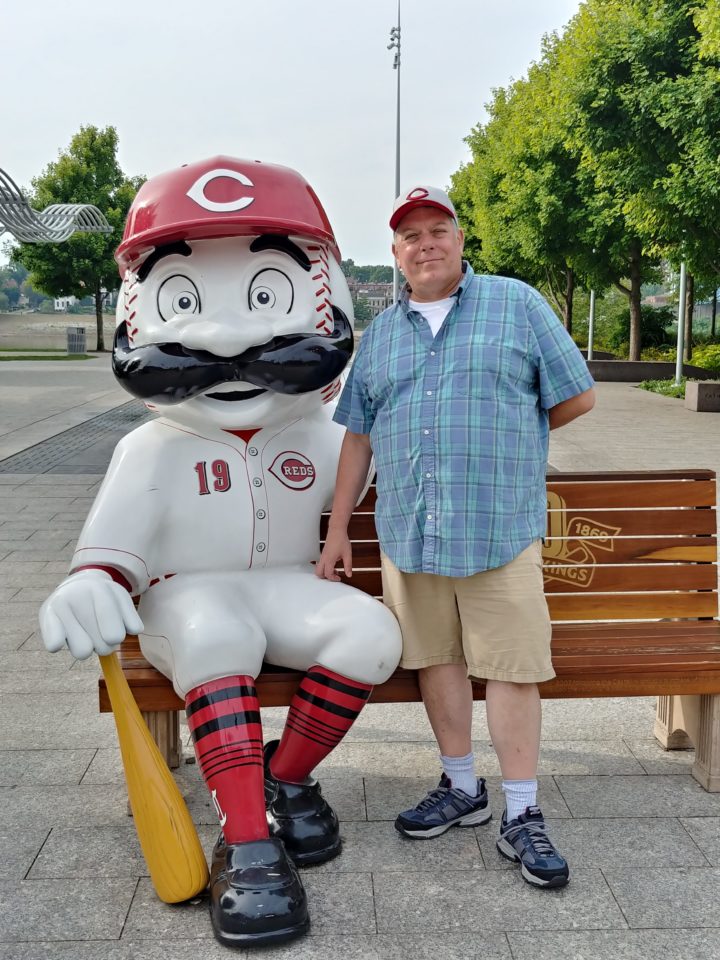 I don’t generally post photos of myself here, for obvious reasons. But who gives a shit at this point? This was during our post-breakfast stroll through the riverfront park. Just hangin’ with Mr. Redlegs. By the way, I’m staring straight into the sun here. I’m not generally that squinted down. Also, I don’t know if I mentioned it, but I recently lost my left arm in a horrific reaper accident. 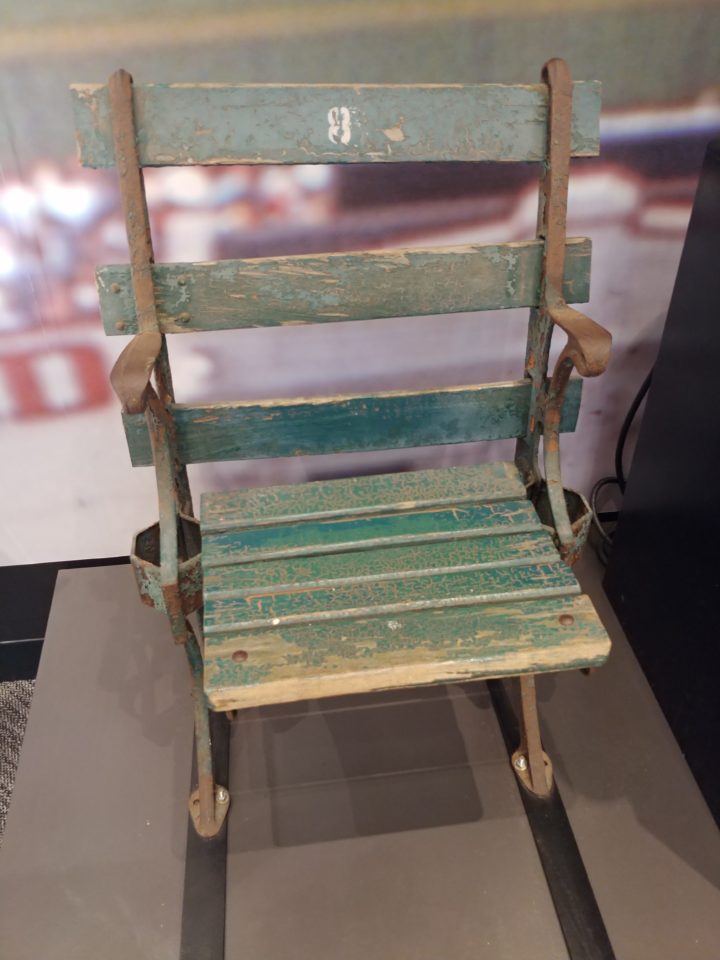 This is a stadium seat from the old Palace of the Fans, where the Reds played from 1902 to 1911. Look at the size of that thing! I’d snap both armrests off, or get my ass wedged in there for good. But I love stuff like this. People sat in that seat to watch baseball… in 1911. When Ty Cobb was 25 years old. Crazy! 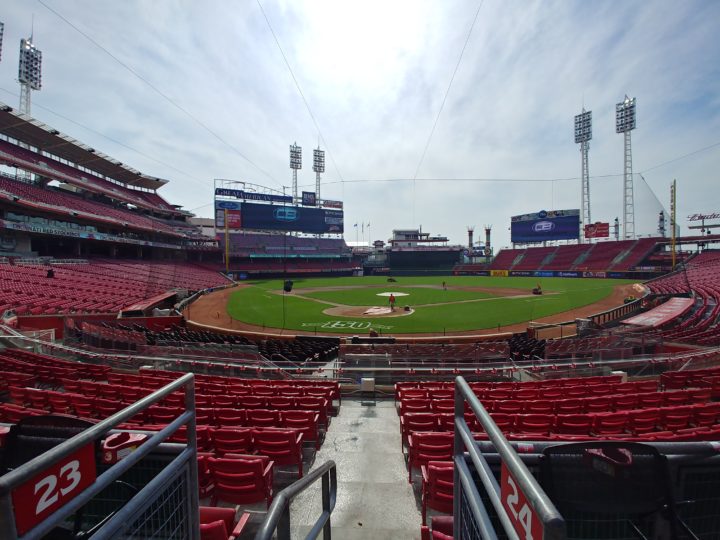 Great American Ball Park at 10:30 am. We were told workers have been there all night cleaning up the garbage that was left on the previous night. At this point, they have hoses out and are spraying things down. The groundskeepers are also hard at work. It was amazing to see how much was going on there, so early in the day. You can’t really tell by the photo, but the whole stadium was a beehive of activity. 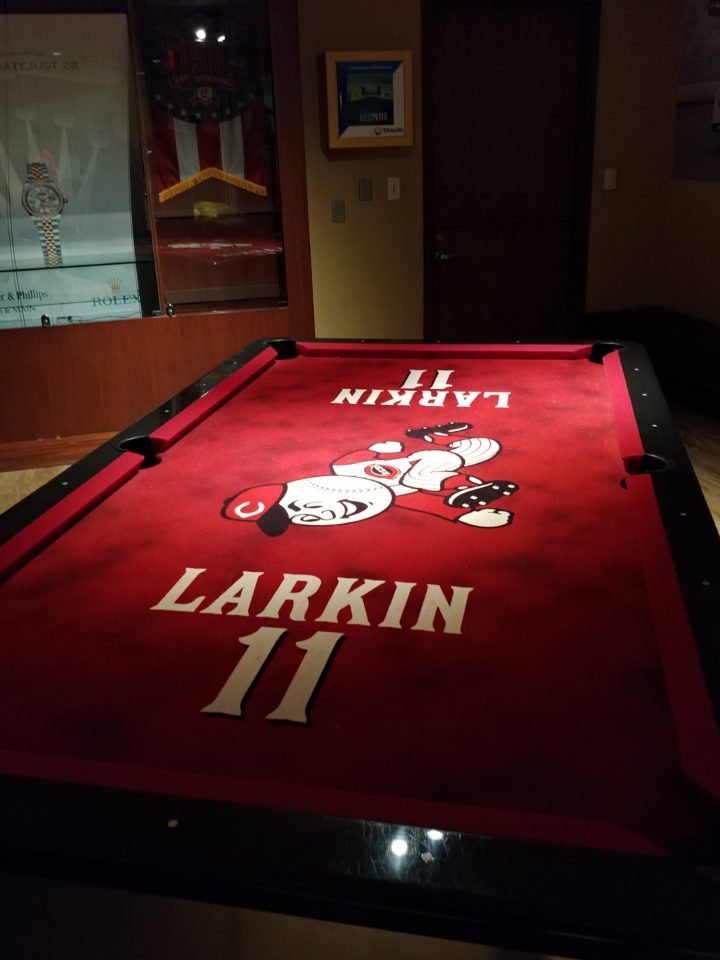 A Barry Larkin-themed pool table inside the Diamond Club area of the stadium. Seats there reportedly cost about $350 each, and include steak and lobster, etc. The tour guide chuckled while telling us that people in Cincinnati believe this is expensive. It is expensive. It might be worth it, but it’s still expensive. 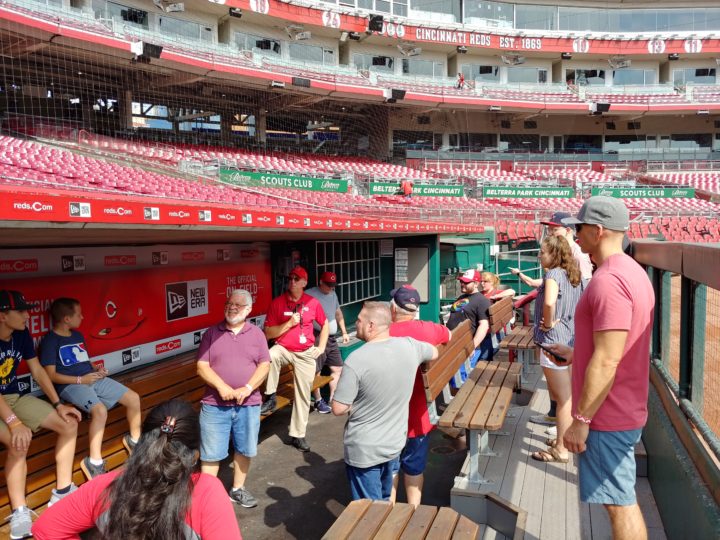 Our tour group inside the Reds dugout. And how cool is that?! The bench, by the way, has cool air blowing up through the slats, to keep your balls at a reasonable temperature. This part of the tour might go down as one of the most memorable things I’ve ever done. I was about to soil myself. Sometimes I think I’m dead inside, but baseball makes me realize it ain’t quite so. Not yet. 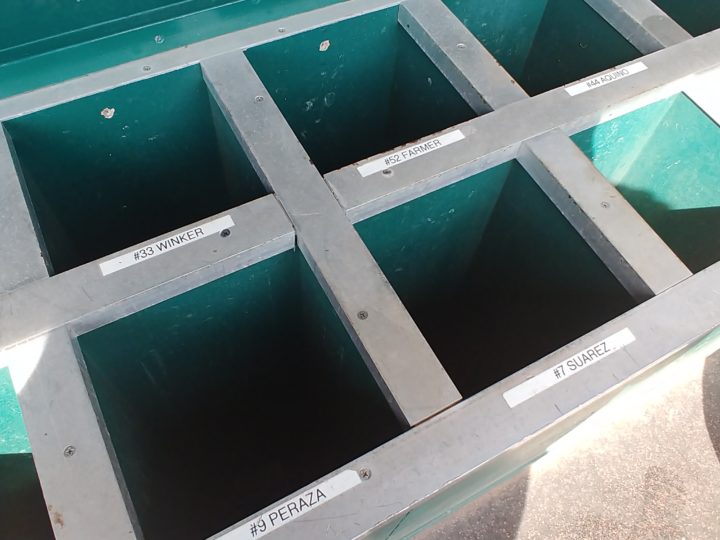 The bat racks inside the Cincinnati dugout. Notice the spot where The Punisher keeps his tools of war in the upper right. 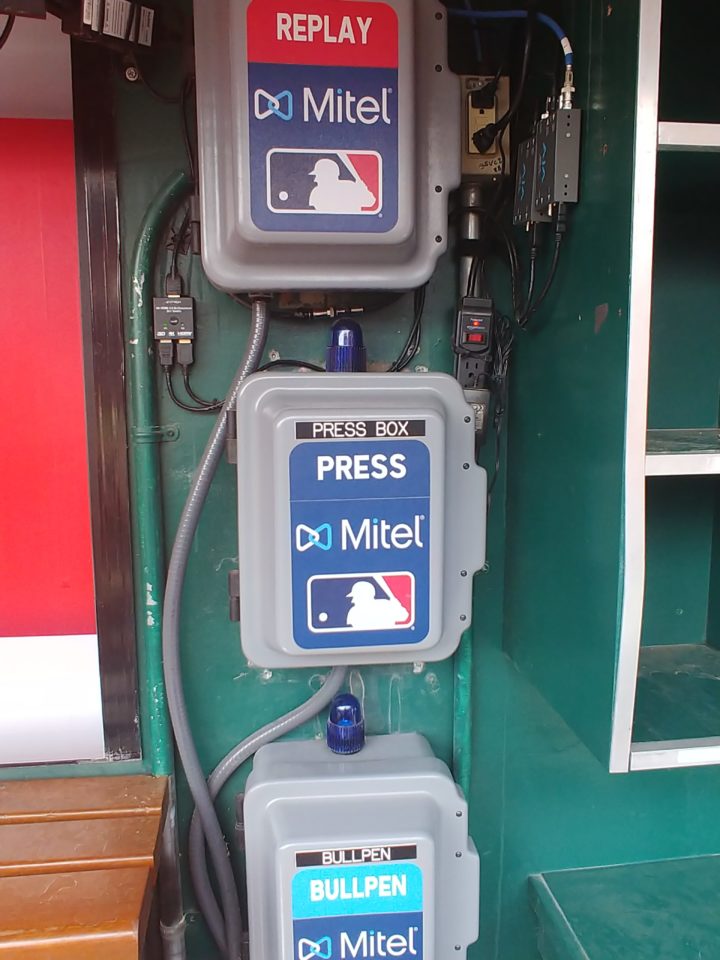 Even stuff like this amazes me. It’s the various phones inside the dugout. Not sure why they can’t just go with one and post a list of extensions, but whatever. I pretended to call the bullpen during a moment of high-levity. I’m sure that’s never happened before. 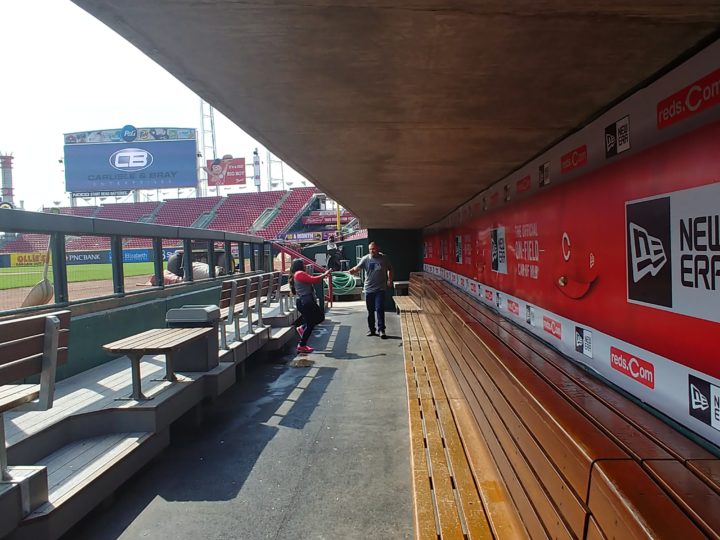 One more shot of the dugout, before we move on. …I’m sorry, I’m getting a little emotional. 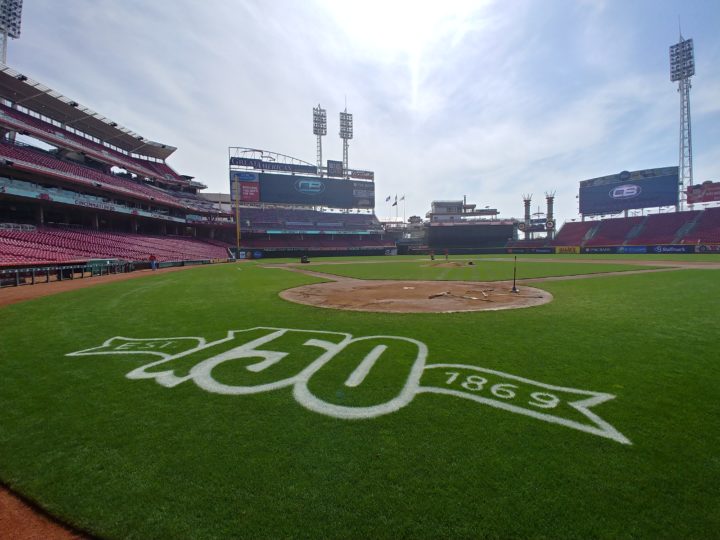 I took this one from the warning track, behind home plate. They warned us — and were clearly serious about it — to not walk on the grass, or even touch it with our hands. 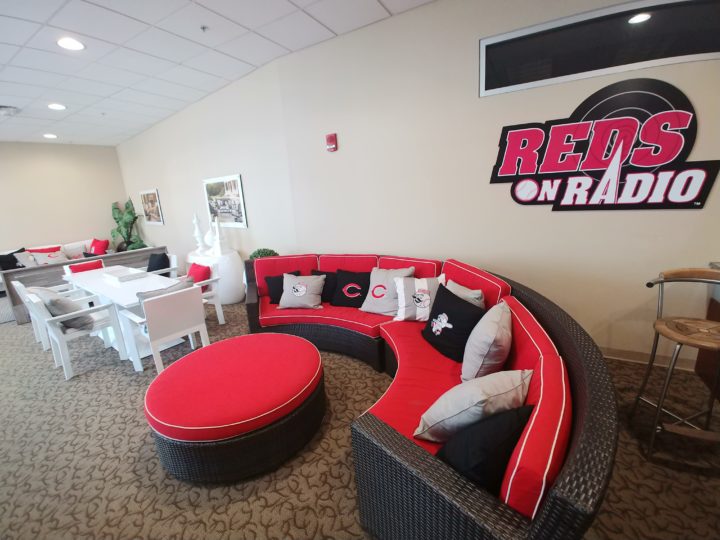 Obviously, the Reds on Radio area o’ the stadium. They didn’t show us the actual radio booth where the play-by-play is done, which was mildly disappointing. But this area is right behind it. Cool! 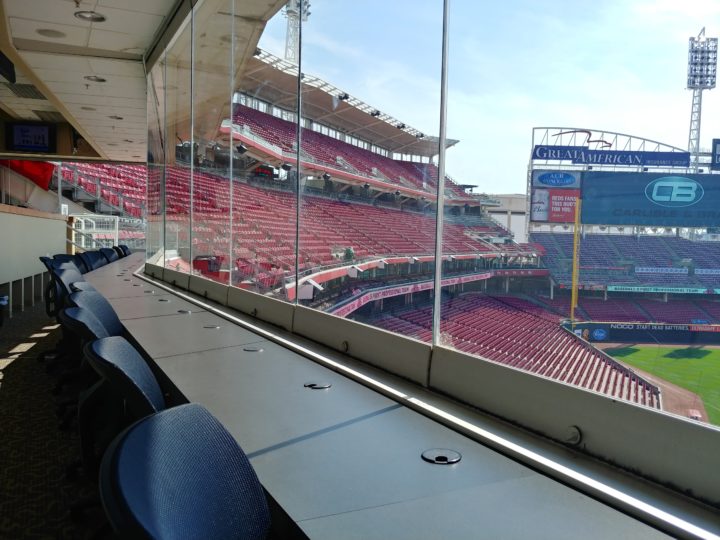 Inside the press box. The glass is removed on nice days, they told us, and there are many dents in the rear walls from foul balls. Somebody writes the player’s name and date on each dent. 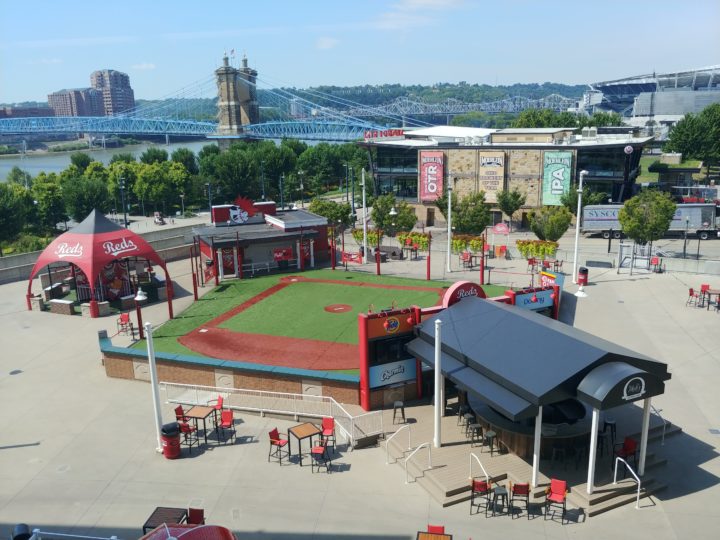 How great is this? A Wiffle Ball field for the kiddies. I love it. Also, the location of home plate from the old Riverfront Stadium is “near the hostess station” inside that bar in the background, the one with the big IPA banner. It’s hard to imagine. I visited Riverfront many, many times. 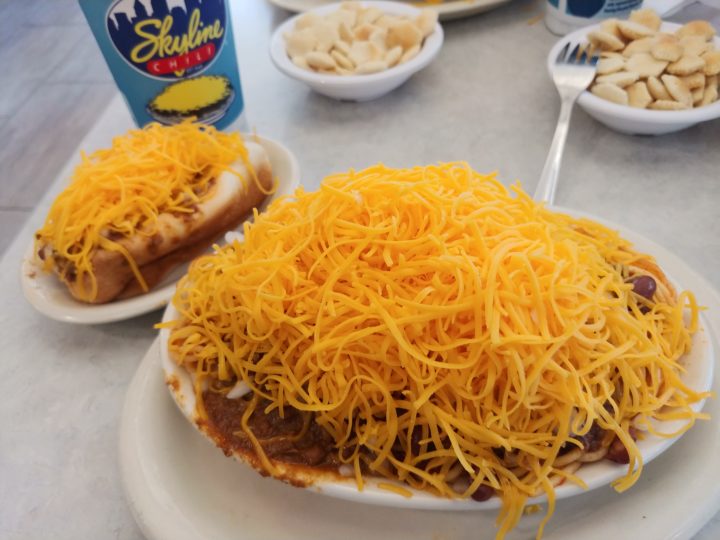 My lunch at Skyline Chili. I wish I’d gone with the extra cheese option. This is a so-called Five Way, and a Cheese Coney. 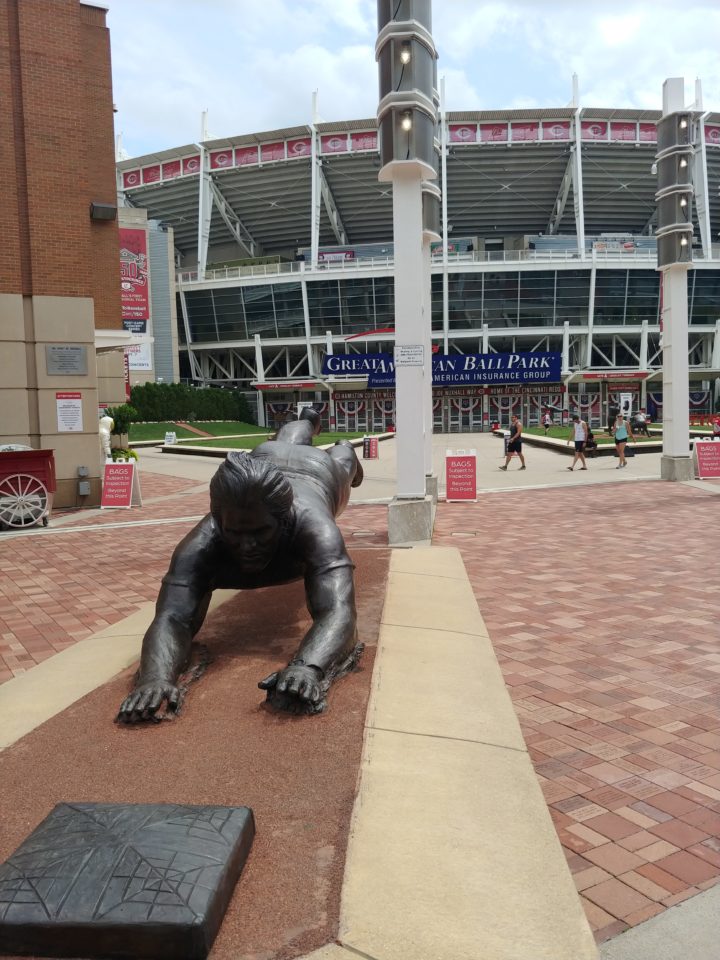 Pete Rose statue outside the stadium. 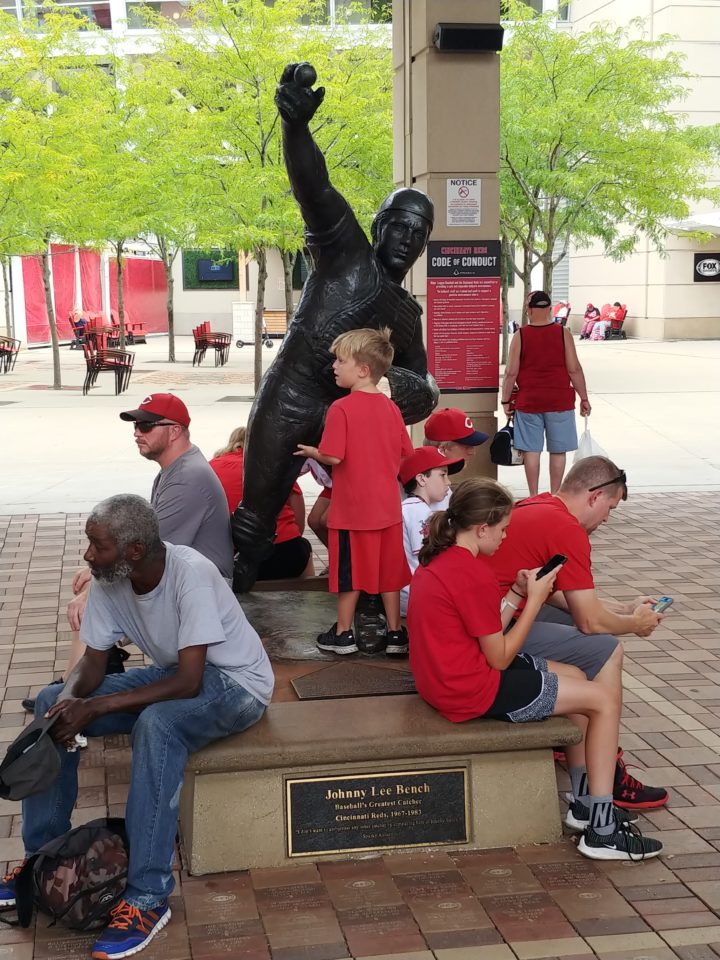 People huddled around the Johnny Bench statue. I had to fight the urge to run over there and start hollering, “Have some respect, assholes!” 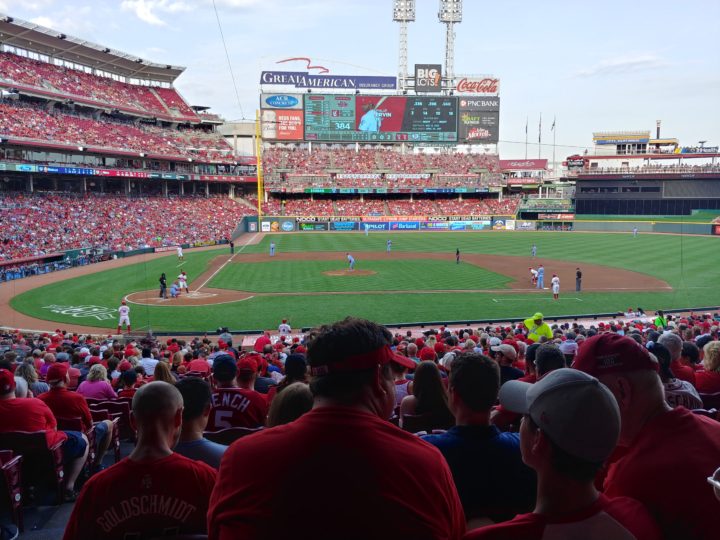 From our seats on Saturday night. As you can see, they were a lot closer than my $19 Friday seat. Great game! They were wearing 1976 Throwback uniforms too.

And that’ll do it for now. I took over 200 photos, and hope I’ve chosen the right ones.

Also, I plan to do a Patreon episode of the podcast, and will likely post it late Friday or early Saturday. So, be on the lookout for that.

And have a fantastic day!