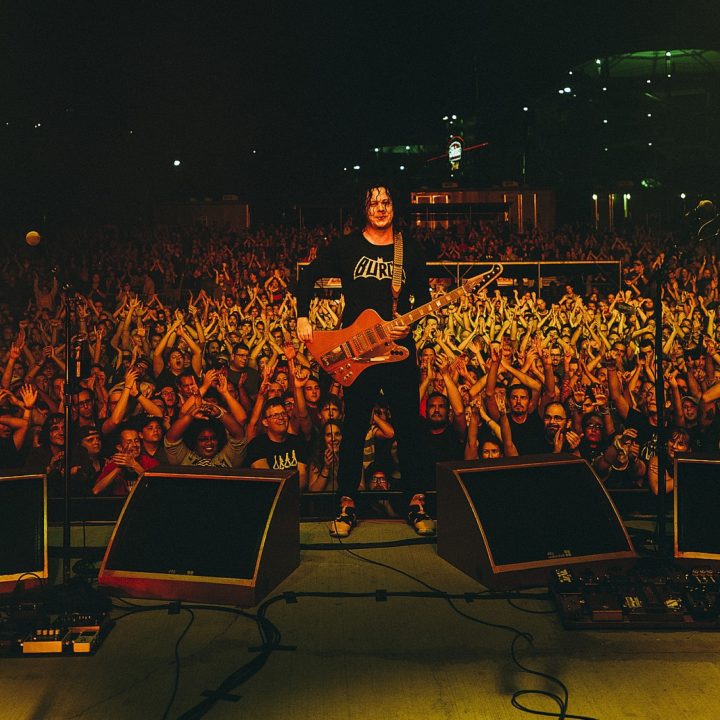 That’s a photo of Jack White taken from the stage of the Raconteurs show we attended on Tuesday of last week, in Pittsburgh. We’re out there somewhere. I can’t find my pasty face in the crowd, but we were there and pretty damn close, too. Fun time! And the fact that it was only a week ago blows my mind a little. So much has happened, it feels like a month has passed.

Before I get into the meat o’ this one, I want to mention that I had my very first guest host on the podcast while I was traveling last week. Producer Zipp sat in for me on the Thursday show and did a bang-up job. It’s hilarious, and you should definitely give it a listen. Right here. He puts vacations into four categories and tells a personal story to illustrate each of them. It’s very funny! I’d love to get your feedback on this one. Tell us your thoughts in the comments section. And thanks, Zipp! Much appreciated!

Yesterday I recorded a lengthy (for me, anyway) podcast telling my road stories through Friday night. That includes the back and forth guerilla strike on Pittsburgh for the rock show with my kids, and the first half of the Cincinnati trip with Toney. It’s only 45 minutes long, I don’t want to scare anyone away, but it’s about 50% longer than normal. I hope you’ll give it a listen, right here or at the fancy doohickey below. It’s called Rock n Roll! Tennis! A Smattering Of Baseball! And then I’ll share some photos from that part of the trip. I took over 200 in total, so I’ll try to narrow it down to just the best 180 or so. You know, so as not to overdo it. Here’s the doohickey:

And here are some photos: 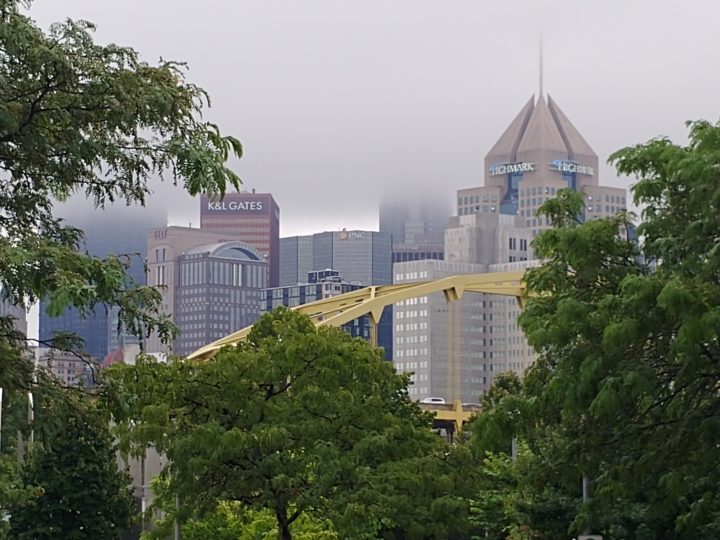 I don’t have many pictures from the Pittsburgh portion of the week, ’cause the Raconteurs did not allow phones. They made you put them in one of these Yondr pouches, so you didn’t have access to them during the show. But I snapped this one while waiting to get into the venue. It was rainy and foggy and it felt like the temperature was plunging. Since it was an outdoor concert, I didn’t care for any of that nonsense. Except for the temperature plunging. I was cool with that. 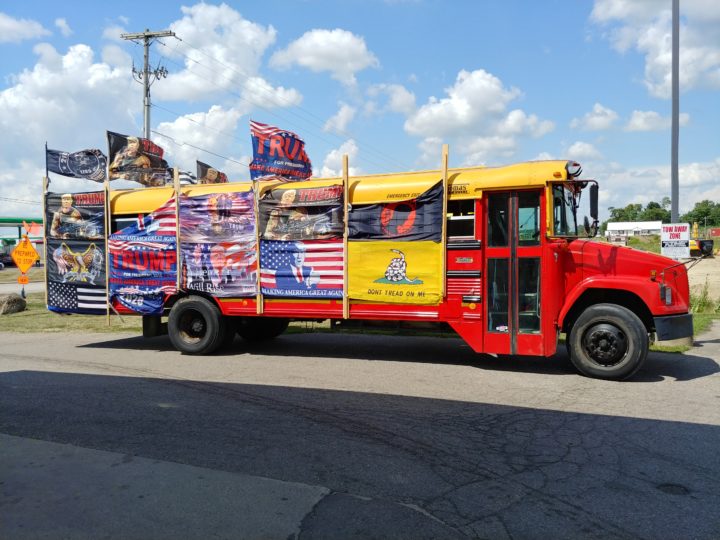 On Thursday Toney and I stopped for gas shortly after crossing into Ohio, and saw this interesting contraption parked there. Inside the store, it was a hardy mix of rednecks, meth heads, and Amish men in straw hats. We didn’t hang around long. 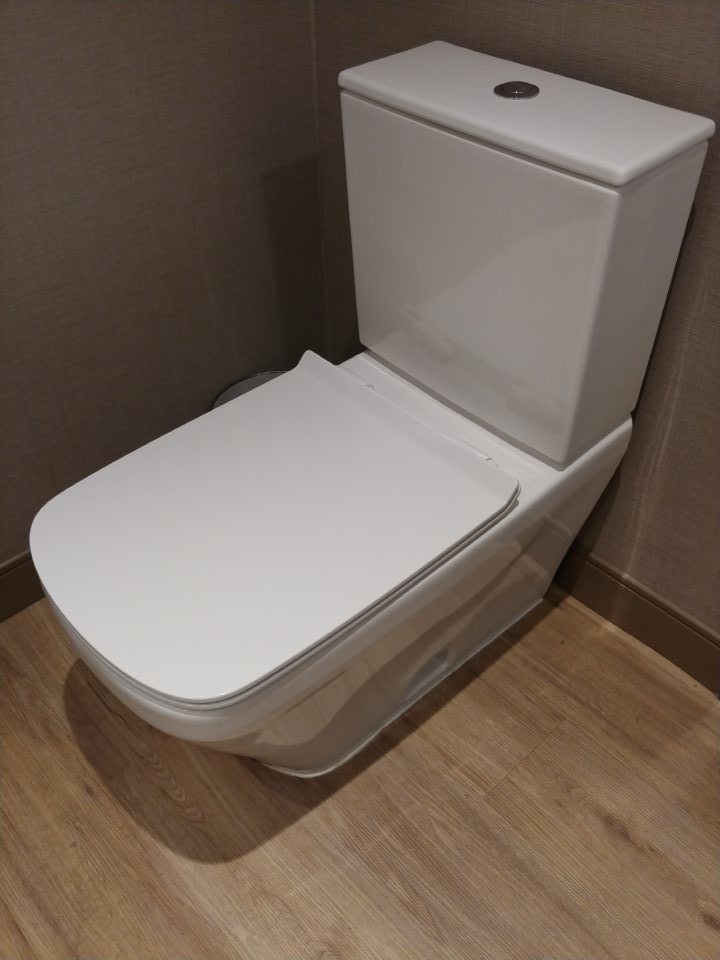 I did about five solid minutes on this squared-off toilet in our hotel room. I wanted to know how I was supposed to attack it: facing forward, side-saddle, or corner-to-corner. Toney did not seem to share my amazement. 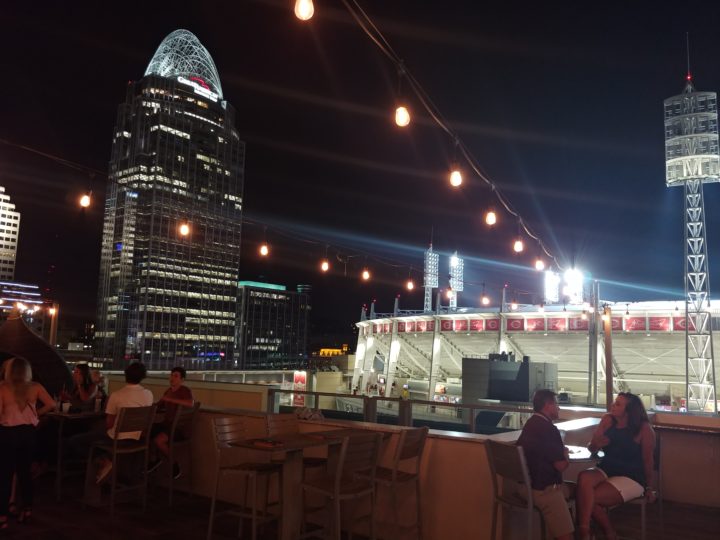 A shot from the rooftop bar of our hotel. You can see how close we were to the baseball stadium. It was literally across the street. The Reds were busy beating the Cardinals as I snapped this. I felt guilty for not being in there, but we’d just driven ten hours and I had an advanced case of Phantom Ass Syndrome (PAS). 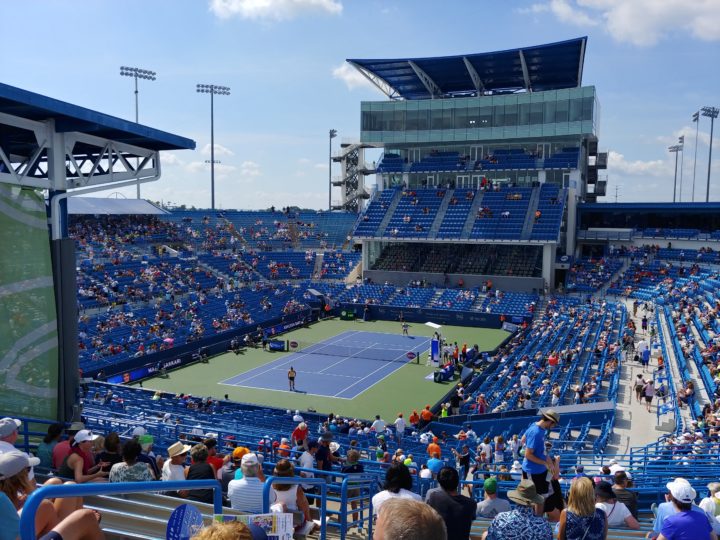 Center Court at the Western & Southern Open, aka the Cincinnati Masters. This is from our assigned seats, which we never sat in again. Competing is Ashleigh Barty vs. Maria Sakkari. It was hotter than owl piss out there. My initial thought: “This is going to be a loooong day.” But it turned out to be a blast. 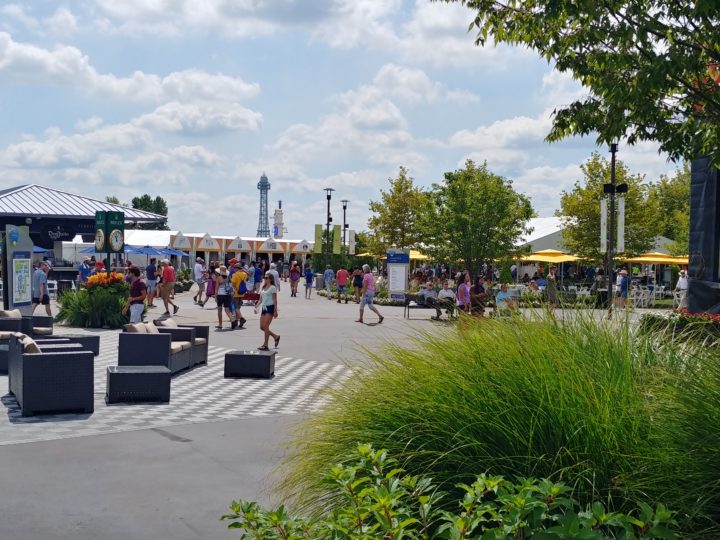 There were many, many vendors and shopping “opportunities” there. Including such offerings as a vodka tent, a stand where you could buy glasses of champagne ($19), and a place where you could purchase “cheeses of Europe.” Oh yeah, and high-end jewelry, too. At a tennis tournament? Hey, whatever. We enjoyed some local delicacies: Graeter’s ice cream,  LaRosa’s pizza, and a pint of Rhinegeist beer.  You can see the Eiffel Tower at Kings Island amusement park in the background. 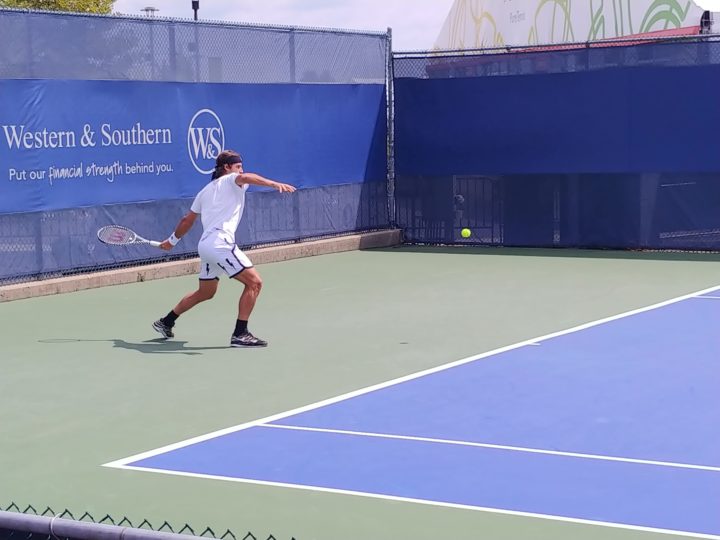 Somebody semi-well-known… to people who know tennis. Toney could tell you his name, but I can’t. Anyway, this is at one of the 18 or so practice courts. People applauded when he arrived. We also watched Andy Murray at one of the practice courts, but my photos of him aren’t great. 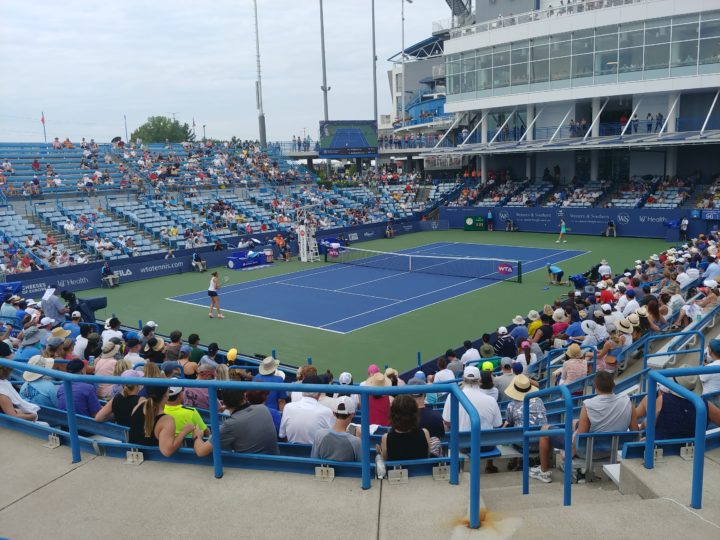 I think they called this stadium the Grandstand. I’m not sure, but this was the best part for me. It featured Svetlana Kuznetsova and Karolina Pliskova, in an exciting battle. The crowd was into it, and it was genuinely fun to watch. This was after we were bullied out of our shady seats by a gang of senior citizens who were making us feel guilty. But it was a good time, even out in the blazing sun. 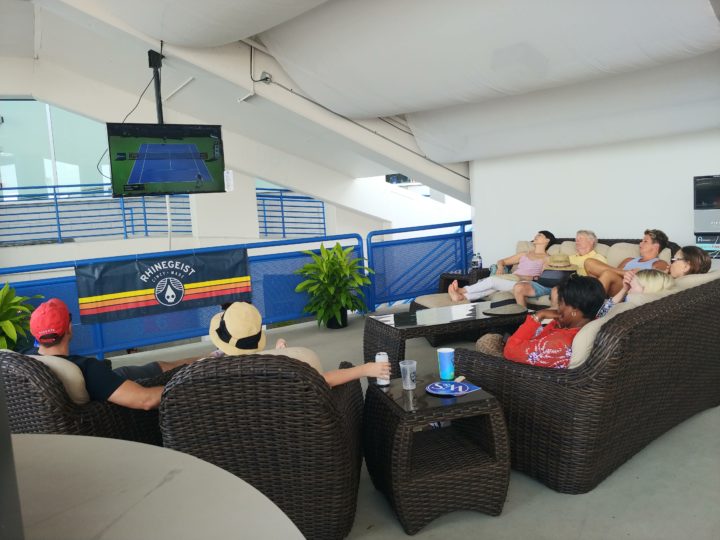 A corner of the massive Rhinegeist “party patio.” People are sleeping in there! Or watching tennis on TV! The actual match is happening on the other side of that wall. That sun will flat out destroy you. We had one pint each, and they cost $11 per cup. Later that day we bought a 12-pack of the same beer for $17.99. 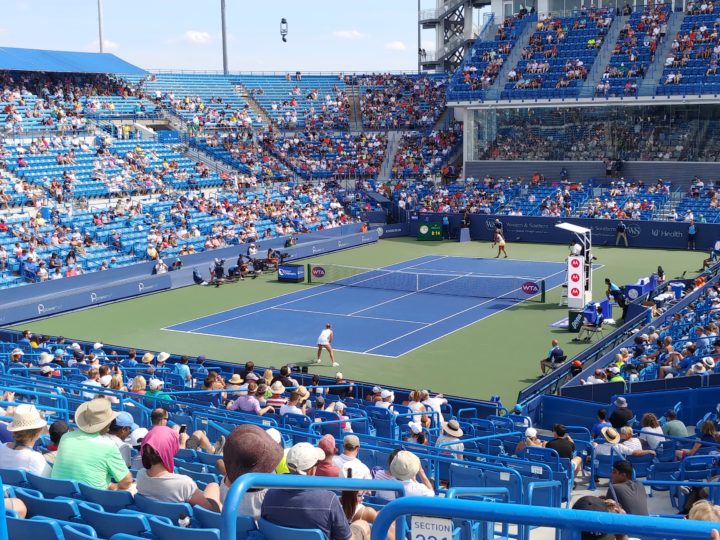 Back at Center Court, for our final match of the day: Naomi Osaka vs. Sofia Kenin. Osaka dropped out with a knee injury or somesuch. 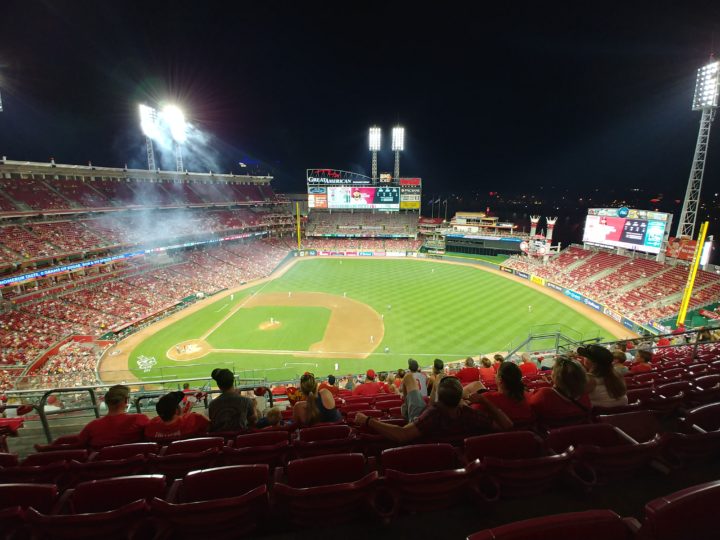 After it was clear Toney was done for the day, due to high heat, etc., I walked across the street and took in a Reds game alone. I told the girl at the box office to give me a seat that’s cheap and in the shade. This one cost me $19, and I was indeed out of the sun. The photo was taken after dark, of course, but it was bright sunlight when I arrived. It was fun, even though the Reds got the everlovin’ shit kicked out of them. Oh well.

And that pretty much takes us through Friday. I’ll update you on Saturday and Sunday next time. Saturday was baseball-heavy, and oh so cool. Stay tuned!