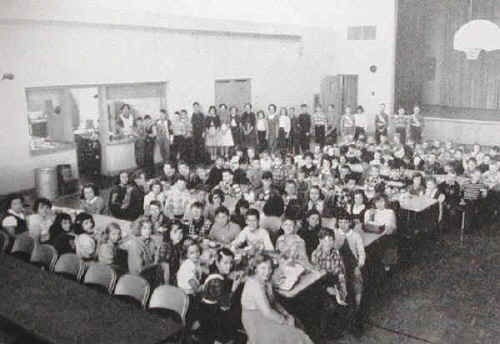 At my job they’re considering adding a cafeteria for the employees.  Needless to say, I’m fully in favor of such a move.  The building is way out in the middle of nowhere, so we have to bring our “lunch” (8 pm), or drive ten miles to Burger King.

And my lunch usually consists of two pieces of white bread, a cuppa two tree slices of turkey, a slab of American cheese, and a breakfast bar for dessert.  Fukkin yum!

On Wednesday nights, our Friday, we usually have some stuff delivered from a pizza joint located god-knows-where, and that’s pretty good.  But a full-blown cafeteria, only a few yards from my desk?  Man, count me in!

Of course everybody will say it sucks, that’s required.  There will be jokes about food poisoning, and rumors of nose-picking “chefs” and the like.  People are as predictable as a post-Starbucks assplosion…  But will it influence me?  No, it will not.  I will be their best customer; my name will eventually end up on a plaque near the deep-fryer.

And all this industrial-food talk has got me to thinking about the school cafeterias I have known…  I went to three public schools in my life:  Dunbar Elementary, Dunbar Junior High, and Dunbar High.  And I logged many an hour in all three cafeterias, if you’ll excuse my use of the word “logged.”

Here are some highlights, off the top of my head:

One day I was going through the food line at the elementary school, and a rather severe cafeteria lady eyed me suspiciously, and blurted, “Hey, you’re that boy who spit on my house!”  Then she cut my pig-in-the-blanket in half, and only gave me 50% of it.

WTF?  What kind of crazy woman uses a pig-in-the-blanket as a weapon against a fourth grader?  It was a retaliatory move, involving a wiener in pastry!

I didn’t know what she was talking about, but if I’m going to be punished for spitting on a house(?!), then I’m spitting!  I sat and schemed with Bill, and think I planned to eat an entire sleeve of Oreos before visiting the woman’s home.  Heh.  But, unfortunately, it was another project that never really got off the ground.

At that school we were allowed to go back for seconds, if there was food left over and we’d eaten everything else on our compartmentalized trays.

But there was usually some stuff served to us that wasn’t very good (like that slimy-ass spinach), so we figured a way around it.  We ate what we liked, drank our milk, and put everything remaining inside the empty milk carton.  Then we’d carefully adjust the top of the carton to appear normal, and go back through the line for the “good stuff.”

Sometimes our milk cartons were so tightly compacted, they  weighed about three pounds.  When we tossed them into the garbage, before leaving the cafeteria, there was often a loud THUD! as that bunker-buster hit bottom.

We never got caught, though.  I bet kids are still using that technique today, in the very same lunchroom.

And speaking of seconds…  One day there was a massive surplus of those little round potatoes they used to serve us.  Know what I mean?  They were round, and had no skin of them?  Not bad!

Anyway, the cooks had way too many of the things, and we started having a contest to see how many we could eat.  One kid had 36!  I hit the wall in the mid-teens, I think, but plenty of others were in the twenties, or even thirties.

After news of our contest leaked to the teachers, and whatnot, they started asking us questions about it.  But they were very sly, and acted as if they were amused by it all.  “How many potatoes did you eat?” they chuckled.

And once they had the numbers collected, they dropped the bomb on us.

Every student who ate more than some arbitrary amount (13, maybe?) was marched into a room, and received a stern talking-to about gluttony.

Plus (get this!), we were forced to wear huge badges of disgrace for a week, made out of full-sized paper plates, designed to look like the face of a pig.

I’m not kidding…  Across the pig’s face were the words NO SECONDS.  We’d have to pin them to our shirts before going to the cafeteria, and sit there with pink ten-inch pig heads on our chests during the entire meal.

Hilarious.  If they pulled some shit like that in 2009, dozens of people would lose their jobs, CNN would be there, and a team of counselors would be bussed-in to help the children cope.

Man, I wish I’d kept my too-many-potatoes badge…  I’d like to wear it to the mall.

Also at the elementary school Bill and I were sitting there having our lunch one day, when some kid we called Shave sat down across from us.

He was an annoying little shit, always going on and on with nonsense.  I remember him counting the coins in his pocket, saying, “One dollar, two dollar…”  It didn’t matter what coin it happened to be, he called it a dollar.  He bugged the hell out of us, on several levels.

And on this day Bill had had enough of Shave’s stupidity, and threw a fruit cup in his face.  Remember those things?  A little white paper cup, filled with fruit cocktail?  Well, Bill tossed the contents of one directly into Shave’s face.

Incredible!  I can still see that kid’s surprised expression, with heavy syrup dripping off his chin, and a peach cube sliding off his shaved head.  And, once again, I don’t think anyone paid a price for it.  Except Shave, that is.

I could undoubtedly come up with more stories, but need to stop.  Maybe you guys can take over?  Use the comments to tell us your memories of the school cafeteria.

Also, what was your favorite cafeteria food, and least favorite?

At the Junior High they had some kind of spaghetti casserole type of deal, with cheese melted on top.  I loved that.  But they also served a nasty-ass barbecue sandwich.  It was kinda pink/beige in color, and had big white veins (arteries?) insinuated inside the “meat.”  Unspeakably disgusting….

So, if you have anything on these subjects, we’d like to hear ’em.  Or read ’em, whatever.