When my kids told me about a commercial they’d seen on Nickelodeon, for something called Giant Cheetos, I had a vision of someone walking around with a baseball bat-sized cheese snack across their shoulder.  And every once in a while they’d turn their head to one side, and take a big crunchy bite.

Of course, I knew this was ridiculous.  Frito-Lay doesn’t make products the size of Louisville Sluggers (unfortunately).  And after I reigned in my imagination, I decided it must be like a candy bar:  a single “giant” Cheeto the length of a Snickers.  Which is still fairly amazing, when you think about it.

A few days later, however, Buck sent a photo to my cell phone, of (that’s correct) Giant Cheetos on the shelf of a 7-11 in downtown Charleston, WV.  What the heck, man?  This was starting to become a theme in my life.

I decided I’d better check ’em out, and went on the hunt at a nearby fancy-pants grocery store.  I assumed they were candy bar-like, and sold by the cash registers (confirmed by Buck’s pic), but the boys said they came in bags like potato chips.

So, I checked both locations, and found nothing.  An employee asked if I needed help, but I mumbled that I was OK.  ‘Cause I didn’t want to say, “Yes, where do you keep your enormous snacks?”

Sensing an obsession taking hold, I went to two (two!) convenience store, and was frustrated at both.  I mean, they carry all manner of questionable crap — why no two-hander Cheetos??

I told Toney about my adventures, and she said it had Wal-Mart written all over it.  Outrageous servings of bad shit?  Why look anywhere else?  Good point.

“Will you be going there anytime soon?” I asked, hopefully.  “I’m on it,” she replied.

And so, the very next day I came home to find two large, colorful bags on our kitchen counter.  One was called simply Giant Cheetos (or is it Cheetos Giant?), and the other was also Giant — but labeled “twisted puffs”.

I ripped open the regular bag first, and peered inside.  Check it out: 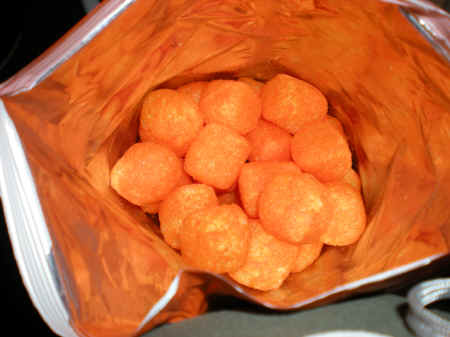 Frowning, I dropped my booger hooks inside, and grabbed one of the not-so-giant orange balls.  They weren’t what I expected…  I mean, Cheetos aren’t round, ya know?  Wotta rip-off.

The thing was almost exactly the same size as a marshmallow — the big roasting kind.  Here’s a shot of it, beside a coffee mug for scale. 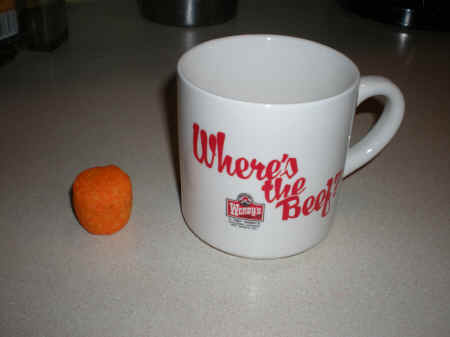 Does it look giant to you?  I’m not so sure.  Yeah, it’s big — the perfect size to block a windpipe — but “giant” is pushing it a little.

Eyeing the ridiculous thing, I didn’t know if I should eat it all at once, or just take a bite.  I opted for the latter, and it was so coarse it felt like my gums were pulling away from my teeth.  “Holy shit!” I hollered, as my kids buckled over in laughter.

“Check the expiration date on that bag,” I said, while popping the remainder of the snack ball into my mouth.  It was incredibly dense, and hard to chew.  It tasted OK, approximately the same as a regular Cheeto, but it was really hard and wreaked havoc on my gums and the roof of my mouth.

The boys each had a big cheese-flavored ball, and also struggled to get ’em down.  Too hard to chew was the unanimous verdict.

I ripped open the bag of twisted puffs, and laughed out loud.  They were bigger (much closer to giant), and reminded me of something we keep on the shelf above our washer and dryer: 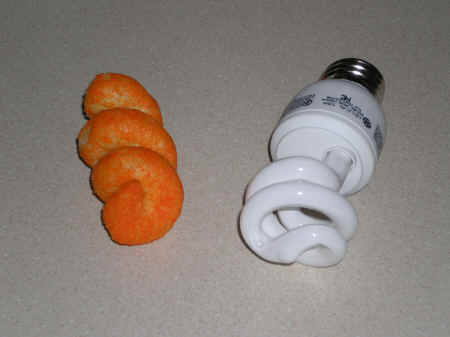 No way in hell a person should try to eat one of those big ol’ things all at once.  They’re hilariously large.  So I bit off the top third of the coil, and was surprised to find it much softer than its spherical cousin.

Hmm… not bad.  There’s no obvious advantage to it being comically oversized, but the twisted puffs are more manageable and easier to enjoy.  By a longshot.

I’ll give the regular handball o’ crunchy “cheese” a C+, and the Al Gore light bulb variation a solid B+.

I have a feeling we’ll never have either again, though, since the regular normal-people Cheetos are just fine.  And much easier to eat, too.  Nothing is gained by making them really big; it’s just a novelty that provides no actual snacking benefits.

I will, however, be glad to test and review other outsize snackables.  Like, say, M&Ms the size of an apple, a wearable Funyuns sash, or a Pixie Feedsack.

Do you have any other ideas for snack foods taken to the extreme?  If so, tell us about it in the comments.  Also, if you have an opinion on Giant Cheetos, we’ll need that as well.

Thanks for reading, I’ll see ya next time.