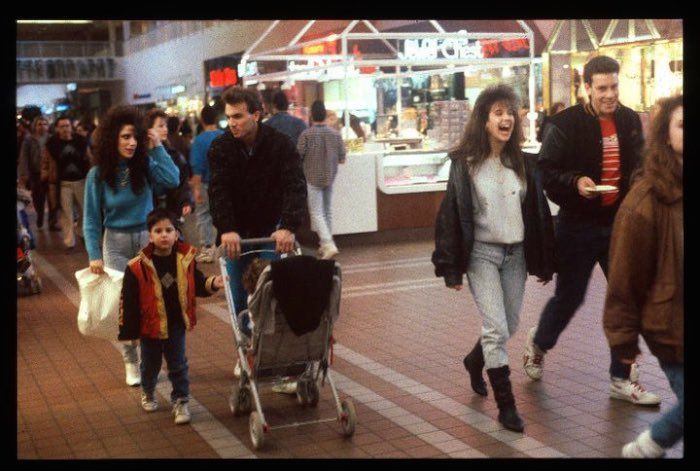 Not anymore. At this point malls offer little more than expensive clothing for the young and angular, jewelry stores (why so many jewelry stores?!), hideous shoes, and unreasonable underwear for high school girls. I don’t really fit into any of that (so to speak). On the rare occasion Toney drags me to one of those places I almost instantly lapse into a semi-catatonic state. Here’s an Instagram account that does a great job documenting this phenomenon; these are my brothers.

It wasn’t always this way. As impossible as it might seem I can recall a time when I didn’t object, or even secretly groan, when somebody suggested a trip to the mall. There was stuff for me there, things I didn’t mind checking out. Do you remember? What happened?! It would be easy to blame it on the age difference, but I don’t think that’s it. The 1983 Jeff Kay would’ve been bored as shit with the current malls too. Oh, he might’ve been young and angular, but hip and shockingly expensive clothes was never an interest. No, a time-traveling me would be equally despondent. ‘Cause there’s nothing there for me now.

Here’s some o’ the stuff that used to make it kinda fun:

Record stores. At the Town Center Mall in Charleston there were two: Camelot and National Record Mart. Camelot was fairly lame — a standard mall record store. But NRM was fun. I genuinely liked exploring in there, and found some surprisingly cool things on their shelves. The NRM in the Huntington Mall, also not far from where I grew up, was even better. For whatever reason they had an AMAZING cutout bin. Cutouts, in case you’re unaware, were albums that had been discontinued by record companies, and were being sold at a very low price. Sometimes just a dollar, but usually $2.99 or thereabouts. Most of it was garbage, of course, but there were treasures mixed in if you had the patience to look. And mister, I had the patience. I discovered some of my favorite records of all time in the NRM cutout bin at the Huntington Mall: the first two Undertones albums, All Mod Cons and This Is The Modern World by The Jam, and the original Nuggets compilation. That shit was electrifying!

Book stores. I mean, they weren’t the greatest, but they weren’t bad. We had the two standard offerings at the Charleston Mall: B. Dalton and Waldenbooks. Both had a ton of magazines, which I always enjoyed. If my girlfriend wanted to do a deep-dive on clothes shopping, or whatever, I might wander over to one of the bookstores and check out their roughly one million magazine titles. Sometimes I even bought a few of them. I was always a magazine guy, especially anything to do with music. But also baseball, National Lampoon/MAD, photography, travel, and anything else that caught my eye. I liked those stores. I bought a bunch of books there too.

Pet store. I know these are frowned upon nowadays, but my girlfriend and I always made a pilgrimage to the pet store at the Charleston Mall. We used it as nothing more than a dog zoo. Ya know? But it was enjoyable to walk over there and take an extended gander at all the puppy-mill cuteness. I don’t remember any cats at the zoo, but there might’ve been some. I’m all about the hounds, and always have been. I think my mother bought a dog at one of those places once, on a complete whim. She named him Tojo for some reason, and he later turned into a diarrhea cannon. He could shit thirty feet, on a good day.

Heaven. This is an obscure one, but a few of you might know what I’m talking about. It was part of a chain, and there was one in the Charleston Mall during the early days. They sold rock t-shirts and kitschy things. All very hip and cool. In retrospect… seems like an odd choice for 1984 Charleston, WV. In any case, I loved that place. They sold retro candies, from elevated candy counters. They were way up in the air, so you could feel like a little kid looking up. Get it? And they sold stuff like Zotz, which you didn’t see all the time. Also, in the back they had a small selection of vinyl LPs. There I discovered a record label that was totally new to me at the time: Rhino Records. Again, electrifying! I bought a surf rock compilation that blew my mind, and a collection of songs by the 1960s garage rock band The Standells. I believe I purchased an album by the Chocolate Watchband there too. Do you see why I didn’t object to going to the mall then?! Here are some pictures of a young Sharon Stone sporting a Heaven sweatshirt.

Food court. I was wildly sheltered as a youngster, when it came to food. Even Americanized chain restaurant Mexican felt like the complete outer limits of exotic back then. So, when they opened that crazy food court at the Town Center Mall, with all those different offerings, it was amazing to me. They had a Greek restaurant up there, and Chinese, maybe even Indian. All sorts o’ things. They also had a Chick-fil-A and a place that made really good cheesesteaks, called Steak Escape. And they had all those mysterious places like Corndog on a Stick (WTF?) and Orange Julius. Oh, it was mesmerizing. It felt like a trip around the world every time you went to the third level of the mall. Fun stuff!

Arcade. I was never a big video game nerd, but always loved pinball machines. So, this wasn’t a huge draw for me, but I enjoyed the fact that arcades existed. The downside: it was always very hot, and there were too many asshole 13 year old boys in there. Also, it never smelled very good, probably on account of the two things just mentioned in the previous sentence. So, not my favorite. But the fact that they existed made me happy for some reason.

Today? Nothing. Unless you’re in the market for an over-priced diamond bracelet, or a pair of banana-yellow skinny jeans. You can’t even get those giant chocolate chip cookies anymore. Man! There’s nothing for me there anymore. And I reject the notion that I’m outside the demographic now. It’s just boring. Oh, I used to like to watch dipshits climb into that hurricane machine. That was just a couple of years ago. Have you ever seen one of those? It’s a booth that you climb into and experience hurricane-level winds. That was fun. I always hoped someone would totally freak out and turn the whole thing over, but it never happened. Now it’s gone too. Oh well. And there’s still Spencer’s, which is shockingly trashy. I went into one this past weekend and couldn’t believe some of the stuff they sell in there. Trashy!

What’s your current relationship with the mall? Do you buy anything there? I do buy shirts from JCPenney sometimes, and maybe sneakers at Shoe Depot, or whatever that place is called. But other than that… nothing. What about you? Tell us about it, won’t you? Also, if I’m forgetting anything from the old days, please remind me. Like Chess King? Ha! Ludicrous.