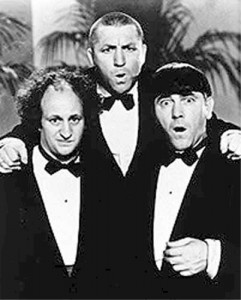 While taking a shower this morning, something popped into my tiny Duke head from way out in left field.  Something to do with the 3 Stooges.  Go figure.

In an episode I saw a year or so ago, Moe, Larry and Curly (or was it Shemp?) were running some kind of store.  I think it was a general store, where they sold a little of everything.  And apparently they owned it, which triggers a lot of unrelated questions…

Anyway, a woman came in and said she needed to purchase a light bulb.  And the thing was shockingly expensive; I can’t remember the price, but it was way more than they cost now, without even taking inflation into account.

And before she paid, um, Moe, he screwed the thing into a light socket built into the top of the checkout counter, just to make sure it worked.

None of this was part of the comedy, it was apparently just the reality of light bulb-buying in the ’30s and ’40s.  I guess they were so unreliable, and expensive, stores provided a place where you could test them in advance.

It’s one of those things that people probably didn’t even question or contemplate, which have become extinct over time.

So, while working the shampoo into a lather, careful not to disturb the wasp-built skin raisin on the back of my head, I tried to come up with things that were common when I was but an ugly youngster, which have now gone away.

And here’s what I came up with:

Taking your Coke bottles back for a deposit.  That’s what we called it: Coke.  It didn’t matter if it was Dr. Pepper or 7UP, and this led people to say things like, “Mountain Dew is my favorite kind of Coke.”

But I’m already getting off the subject…

Every grocery store had a sticky playpen-type thing right inside the front door, where people would put their “empties.”  Some of the more fancy-pants places had an empties steward, who would issue you a receipt, but usually it was just done on the honor system.

When you purchased more sodas, in heavy-ass glass eight-packs, the cashier would say, “Did you bring in your bottles?”  Then they’d knock forty cents, or whatever, off the price of your new “Cokes.”

And if you didn’t bring your empties, you’d have to pay a deposit on the reusable bottles.

Since empty bottles were worth a nickel each, which was a lot of money to a kid in 1972, we all scavenged for them.  Put in a little effort, and you could keep yourself in bubble gum through bottle deposits alone.  Oh, it was a genuine cottage industry…

Neighbors sharing a party line.  My grandmother, who lived across the street from us, shared a line with two or three other houses when I was young.  Can you imagine?

I remember picking up the receiver once, to call my mother at her job, and a fat teenager from two doors down was on there yammering to one of her friends.  My grandmother said, “Oh, she usually doesn’t stay on very long.  Just try it again in a few minutes.”

The whole thing seems bizarre to me now.

Letting the TV warm-up.  Back when televisions had big ol’ tubes in them, we’d have to allow time for them to “warm up.”  This was part of the TV-watching experience:  “Jeff, if you want to watch Rat Patrol tonight, you’d better turn the TV on, so it can start warming up…”  Heh.

Also, when you turned it off, there was a tiny white dot in the middle of the screen for a minute or so.  My brother and I would put our thumb over it, then take it away to see if the dot had disappeared yet.  And my mother or grandmother would yell at us, “Quit getting fingerprints all over the TV screen!  Who cares about the dot?!  Just don’t worry about that dot!”

Adjusting the aerial.  Every house in the ’60s and ’70s had an eyesore conglomeration of aluminum attached to its roof, which was designed to improve TV reception during that pre-cable era.

My grandfather, never satisfied with the picture, was all the time leaning a ladder against the house and climbing onto the roof to adjust the antennae.  Or, as he called it, the “aerial.”

This always made me nervous, because my grandfather wasn’t a young man, and I didn’t see why a person would risk their life just so they could get Flipper crystal-clear.  But whatever.

Price stickers in stores.  As weird as it now seems, stores used to put prices right on their merchandise.  Indeed, when I worked at a grocery store after high school, we’d have to hit everything with a price gun before putting it on the shelf.

There were no scanners, just small pieces of paper stuck to the side of everything, with the cost printed on them. Crazy.

I hate to admit it, but we used to switch stickers at a local discount store, on LPs.  I remember buying a copy of Exile On Main Street, a double album, with a sticker off a bottle of Body on Tap or something.  The key, you see, was to identify a cashier who either a) didn’t have a clue, or b) didn’t give a single dingle.

One time Rocky and I were trying that particular scam, at the same store, and some Baby Huey dancing bear poofter brought the hammer down on us.  We had to make a run for it.  Not my proudest moment…

Would you like your carbons?  Back in the day, before fancy-pants approval systems were perfected, credit cards were a huge pain in the ass.  You’d have to take the customer’s card, attach it to an apparatus, lay a form across it and slide a big handle back and forth to make a rubbing of the numbers.

Then you’d have to pull out a booklet, which was updated every couple of weeks, and check to make sure the card hadn’t been stolen or the person’s account wasn’t closed.  Or, as we did at Peaches Records, we’d have to call the credit card company and get an approval code over the phone.

The whole process could take five minutes or more.  It was a real ball-masher.

Plus, the form had carbon paper in the middle of it, and paranoid customers always wanted to take it with them.  You know, so someone couldn’t dig the carbons out of a dumpster, and create a duplicate card with it.

I instantly disliked people who requested their carbons, because they were all doucheketeers.  They usually acted like they were a little smarter than everybody else; there was a certain smugness to the carbon-folk.

Making soda tab chains.  When I was a youngling the tabs off a can of soda, or beer I suppose, would actually pull all the way off.  Consequently, the entire Earth was littered with pull-tabs.

So, kids used to collect them, and link them together to make a chain.  I remember camping somewhere, probably Myrtle Beach, and some people we didn’t know made the world’s longest soda tab chain.  I mean, that shit stretched an entire city block!

But, of course, that was all ruined when do-gooders forced soda and beer manufacturers to start using the current style of tabs, which stay attached to the can.  Wotta rip-off.

And speaking of littering…  Is my mind playing tricks on me, or did everyone just throw their trash out car windows during the ’60 and ’70s?  I can remember people driving down Dunbar Avenue and, without thinking twice about it, slinging a whole sack of saucy Dairy Queen garbage through the passenger-side window.

What the hell?  How was that ever acceptable?  It makes me laugh, just thinking about it.

And now it’s your turn…  I need to go to work, so you guys can take it from here.  What things were once common parts of our everyday lives, and are now completely gone?  Use the comments link.