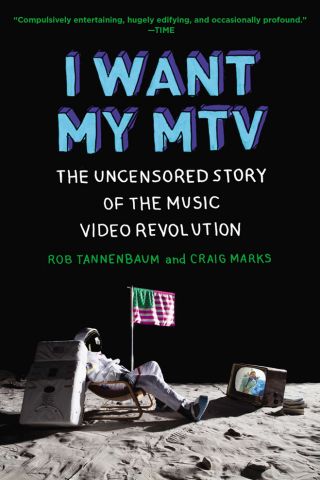 I Want My MTV is a big doorstop of a book: 572 pages, to be exact. But it was so much fun, and addicting, I wanted there to be a few hundred pages more. When I got to the end I felt mildly bummed.

This is an oral history of the early days of Music Television, and the editors seemingly spoke to everyone involved. The stories and explanations of events were then sliced, diced, and arranged to form a compelling narrative.

Because I’m a lazy sack with confidence issues, the thought of taking on such a gigantic project makes my brain ache. But these guys somehow pulled it off. We hear from many former network executives, lower-level MTV worker-bees, musicians, video directors, VJs, etc. And it all fits together to form what feels like the definitive history of the MTV phenomenon.

Some of the folks interviewed were gossipy, and a few were bitchy and/or catty. Many of the stories are not flattering to anyone involved, and there was a good amount of debauchery. Which means it’s fun as hell to read. However, the book never sinks to the level of trash. It’s a tapestry made up of all sorts of people, with differing personalities, most of whom are remarkably open and honest.

A few times a story is told by multiple people, each with a different spin.

For instance, a director talks about working with a difficult and flaky Stevie Nicks. A million dollars was spent shooting a video, and she was horrible throughout the process. Then, when she saw the finished project, she thought she looked fat, and wouldn’t allow the thing to be released. She reimbursed the record company herself, and the whole thing was scrapped.

But when she tells the story… it’s significantly different. Heh. Somehow, I believe the director’s account, over Stevie’s. But what do I know about it?

We also learn that some of the VJs couldn’t stand each other, one of the originals VJs was a full-on party freak, Sting is the pompous ass we all suspected, and John Cougar Mellencamp is a bit of a bastard.

There’s a great chapter about the Van Halen Lost Weekend contest. The winner would get to travel — and party — with the band for a couple days, as they toured and played shows. In one of the commercials promoting it, David Lee Roth warned, “You might not survive!” And, they turned around and nearly killed the guy, for real. He was some nerdy kid from Kansas, or somewhere, and Van Halen almost did him in. MTV brass nearly shit a brick over what happened. It’s really funny, and kind of scary.

And there’s an entire chapter devoted to one of the most notorious videos of all time. Billy Squier is convinced it destroyed his career, and speaks at length about it in the book. The video is below. What do you think? Career-killer? Maybe so, but he agreed to prance. A person can ALWAYS say no to prancing.

There are all sorts of behind-the-scenes tales involving Duran Duran, Michael Jackson, Madonna, David Bowie and most of the big MTV artists. There are some great stories, which will cause you to keep running to YouTube, to watch the videos again.

I Want My MTV is a like a big tub o’ theater popcorn. Once you’re in, there’s no turning back. I highly recommend it, especially if you were a teenager during the early days of the network.