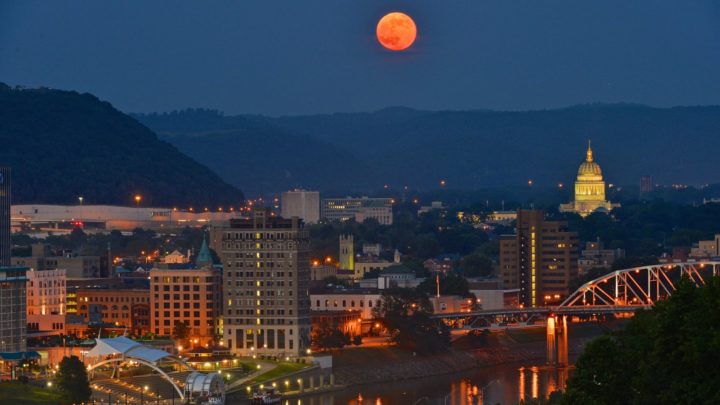 You know what’s weird? To me, anyway? We’ve lived in Pennsylvania for 18 years now. That’s a long time. In the near future, it’ll become the place I’ve lived the longest, surpassing West Virginia. I took the liberty of making a pie chart: 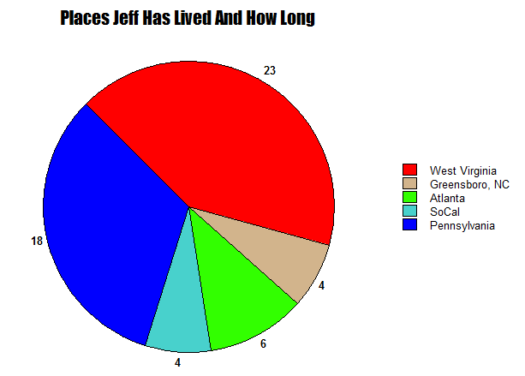 The weird part? It doesn’t feel like I’ve been here all that long. It still feels like a recent development. All the other places seem understated, and Pennsylvania seems wildly overstated. It feels like I was in Atlanta for a long, long time. But I’ve been here three times as long. The shit’s all distorted and outta wack in my brain.

For some reason, I have trouble estimating lengths of time now. Years used to last a year, and now they last six or seven months. Ya know? Occasionally my boss will ask me how long an employee has been with the company, and I’ll say something like, “Well… I’m fairly certain it’s more than a year, but less than twenty. Somewhere in there?” I say it as a joke, but it’s not. Not really. I can’t estimate it anymore.

It bothers me that time clicks along so quickly these days. I’d be lying if I said it didn’t. I’m not super-old but will be soon. My parents are now 76. How? They still seem like they’re in their 50s, but that’s me! I’m in my 50s. Sweet sainted mother of Sonny Drysdale.

One thing is very clear, though. I want to put another slice in that pie. I want to make one more move. Toney and I talk about it all the time and have thrown around dozens of scenarios. And I’m not really talking about retiring and moving… I mean something sooner than that. Somewhere in the southeast, probably. Not sure where, or how we’re going to make it work. But it’s our current project, the thing that keeps us semi-sane. We used to be willing to take those big life-changing leaps, and I want to believe it’s still in us somewhere. I think it is.

And by the way, that picture at the top is Charleston, WV. It’s a nice place, but I can’t see myself ever returning on a permanent basis. But hopefully, I can take steps to keep it from being overtaken. I’ve got to protect the sanctity of The Original Slice! We’ll see how it goes.

What about you? Are you where you’re going to stay? And is your Original Slice the biggest slice? Also, do you have a “project” that you work on and think about to keep yourself sane, like our plans to someday move again? I have to have something like that, or I start to lose it a little.

This isn’t the greatest update, but I’m going to have to leave it right here. I’m not feeling all that spectacular. Hopefully, I’m not coming down with that flu that’ll kill ya. That’s mildly disturbing. Not really a fan…