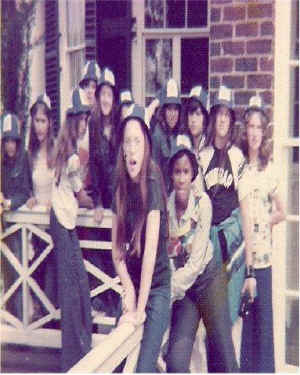 Before we get started, I want to thank you guys for your help yesterday.  I’d forgotten some of those stories, and was laughing my ass clean-off.  “Grandma can be quite arduous…”  Hilarious.  What a fantastic, fully-realized gang of kooks.

Yes, they’re the gift that keeps on giving.  And they’ll be staying with us for a full week this summer.  Have I mentioned that?  Apparently it’s true.  Nancy and the gang will be here for six nights in August.  Six!

Our oldest youngling is on his way to Washington DC as I type this.  He and most of his class will be hitting every main tourist attraction in the city, in less than 48 hours.  The itinerary is insane; I almost had to lie down after reading it.

I went to DC in sixth grade, with the school safety patrols.  We, too, blitzed all the main monuments, the Smithsonian, Arlington Cemetery, etc.  We saw a ton of stuff, and I can’t remember much about any of it.

Only three things from that trip, which happened in 1975, remain vivid in my mind.  And none are related to the White House, or the Capitol Building.

The first:  Stevie Wonder was staying at our hotel.  He was in town to make an appearance at some sort of demonstration, which also featured Muhammad Ali, I believe, and eventually devolved into violence.

We were told that Stevie would be arriving at the hotel at a certain time, so we hung around the lobby, hoping to get a look at him.  I mean, he was one of the biggest stars in the world at the time, and it was all very exciting.

So, we stood there like idiots, and a limousine finally pulled up.  Several large bodyguard types got out, and one of them opened a door on the car.  And the worst Stevie Wonder decoy in the world emerged…

The dude looked like Grady on Sanford and Son.  He was wearing dark glasses, and pretending to be blind: stumbling around and whatnot.  We were a group of sixth graders from West Virginia, and even we were rolling our eyes at this pathetic attempt.

After the poor man’s Stevie Wonder passed through, the hotel staff shooed us away, and we never got to see the real deal.  Wotta rip-off.

Another vivid memory:  A bunch of us bought keychains in a gift shop somewhere, with real, operational cap guns attached.  They used red, plastic caps, which we also purchased.  And these were a source of much amusement…

Inside our hotel room (a very fancy-pants place, I might add) we started shooting the guns into our pillows.  And after every mini-explosion, there would be a yellowish brown spot left over on the pillowcase.  And we thought this was the height of comedy.

By the time we were finished, all of the bedding looked tie-dyed, and we couldn’t stop laughing about it.  And the concerning part?  I’m still laughing, in 2010.  That’s the part that should probably worry me a bit.  But, of course, it doesn’t.

And finally, the most vivid memory of all…

Both mornings we were herded into a cafeteria somewhere, just completely filled with unknown kids, approximately our age.  It was pandemonium, and incredibly noisy.

And I remember watching a large black woman standing in front of a tray of drinking glasses.  They were packed tightly, shoulder to shoulder, and she was pouring orange juice into them, in one continuous motion.

She wasn’t pouring juice into each glass.  Oh no.  It was just being dumped all willy-nilly, across the entire tray at once.  So when we were served our juice, some glasses were half full, and others only contained a couple of ounces.  And, of course, the glasses were sticky as all hell.

I don’t remember much about the Lincoln Memorial or the Supreme Court, but I remember that orange juice scene like it happened yesterday.

The picture at the top of this update was taken on our DC trip in 1975.  As far as I can tell, I do not appear in it.  But it’s all distorted and psychedelic, for some reason.  So who knows?  I swiped it off an ex-classmate’s Facebook page.

Dig the crazy Gilligan hats we were forced to wear!  It’s so they could keep track of us, of course, and I probably still have mine somewhere.  I never throw anything away.

And now the obvious Question of the Day…  Did you ever go on any overnight school-sanctioned trips as a kid?  Did anything interesting happen?  Use the comments link, to tell us all about it.

And I’m going to call it a day here, my friends.  I hope everyone has a great weekend.